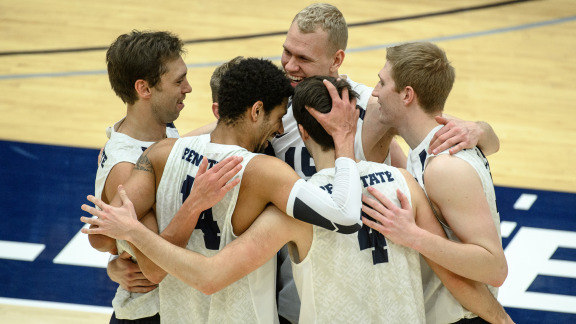 In the biggest match of the day, No. 10 Penn State outlasted No. 15 Fort Wayne, handing the Mastodons their first loss of the season in four sets. No. 14 Pepperdine also held home court, while King and Barton earned Conference Carolinas victories.  Current Photo via Penn State Athletics

In the biggest match of the day, No. 10 Penn State outlasted No. 15 Fort Wayne, handing the Mastodons their first loss of the season in four sets. No. 14 Pepperdine also held home court, while King and Barton earned Conference Carolinas victories.

One major milestone was achieved in the early Saturday matches as King’s Jeff Sprayberry became the school’s first member of the 1,000 kill club.

It Was Over When: Princeton boasted a three-point lead late in Set 3 at 21-18. Two Tiger errors, a Wieczorek kill and Harriman ace brought the Waves into a tie at 22-all. A Luck kill and Pepperdine service error put Princeton at set point at 24-23. Putaways by Wieczorek and Noah Dyer turned the tables and gave the Waves their own match point try at 25-24. The Tigers called timeout and leveled the score with a Dixon kill. Putdowns by Wieczorek and Harriman stole Pepperdine the 27-25 win and the match. Wieczorek downed seven kills in the final set, including six in the final 11 points.

Key Stats: King hit .275 in the match, thanks in part to a big .407 effort in Set 3, while also winning the serve (5-1) and the block (7-5). Emmanuel recovered after hitting .000 in the opening set, but hit just .110 for the match. King senior outside hitter Jeff Sprayberry became the first player in program history to record 1,000 kills as the team won its sixth-straight match.

It Was Over When: King went up five early (8-3) with two Bell putaways and three Emmanuel miscues. The Lions would get no closer than four the rest of the way. Up 16-12, the Tornado scored seven of the next 11 to boost the margin to seven at 23-16 as five players turned in kills. A Robles putdown slowed King momentarily, but a Besson kill and Emmanuel miscue capped the 25-17 win and the sweep.

Stat Leaders: The Mandilaris brothers provided more than half of the Barton offense. Sophomore right side Angelos notched 17 kills on a match-high 382 hitting effort to go with seven digs, five aces and a team-leading three blocks. Junior outside Vasilis added 10 putaways and seven digs, while junior outside Aleksa Brkovic added seven kills and seven digs.

It Was Over When: Barton led by just one at 10-9 in Set 3, before breaking away with a 9-3 run. Angelos Mandilaris downed three kills and Limestone aided the cause with four errors to give the Bulldogs the 19-12 advantage. The Saints narrowed the gap to four at 22-18, including a kill and a block by Rivera. The Mandilaris brothers accounted for the final three points with Angelos adding a kill and a block and Vasilis putting down the final putaway.

Key Stats: Six of the seven Penn State hitters with a kill in the match hit at a .333 clip or better, with four hitting over .400, as the Nittany Lions posted a .393 team effort. Fort Wayne hit .274 for the match, hitting nearly .300 or better in all but the final set, falling to .077 in that stanza.

Redshirt junior outside Colton Stone notched 14 kills for Fort Wayne, while sophomore outside Pelegrin Vargas added 13 to the team’s tally. Redshirt junior outside Tony Price (9) and freshman middle Tomas Gago (8) were not far behind. Gago hit at an eye-popping .727 clip (8-0-11), while also accounting for a team-best five blocks. Junior setter Michael Keegan put together a double-double with 40 assists, 11 digs and four blocks.

It Was Over When: It was a two-point game midway through Set 4 as Fort Wayne trailed 11-9. Penn State, however, quickly changed that, scoring nine of the next 11 points. Three blocks and three Penrose kills led the Nittany Lion charge to the 20-11 advantage. Kills by Vargas, Gago and Price accounted for Mastodon points, but the team could not break through the eight-point margin. Gear and Lee Smith wrapped up the match at 25-15 PSU.