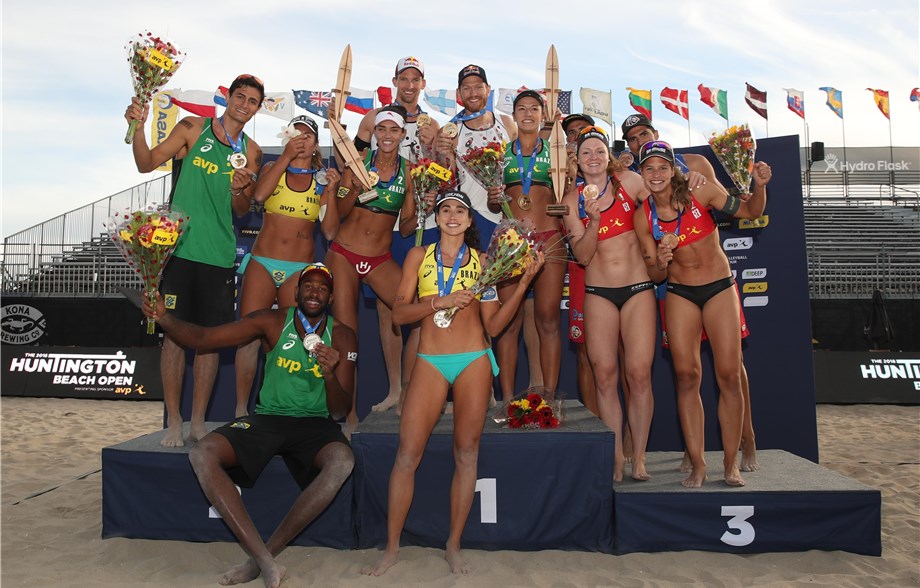 History was made on the men's side of the Huntington Beach Four-Star as seventh-seeded Dutch duo Alexander Brouwer/Robert Meeuwsen of the Netherlands became the first European team in nearly 22 years to claim an FIVB event title on American soil. The last was Norway's Jan Kvalhelm/Bjorn Masseide at the 196 U.S. Open in Hermosa Beach, California.  Current Photo via FIVB

History was made on the men’s side of the Huntington Beach Four-Star as seventh-seeded Dutch duo Alexander Brouwer/Robert Meeuwsen of the Netherlands became the first European team in nearly 22 years to claim an FIVB event title on American soil. The last was Norway’s Jan Kvalhelm/Bjorn Masseide at the 196 U.S. Open in Hermosa Beach, California.

Brouwer/Meeuwsen downed second-seeded Brazilians Evandro Goncalves/Andre Loyola Stein in straight sets to claim their third gold medal of the 2018 season, following titles at the Aalsmeer One Star (March 18) and Doha Four Star (March 10). Brouwer/Meeuwsen fought through a tiebreak with ninth-seeded Latvians Aleksandrs Samoilovs/Janis Smedins in the semis to earn the final bid.

“It was crazy,” Meeuwsen said. “We know (Evandro) has a great serve and he made some errors today but also the ones he did serve well we received them pretty good. That’s making a big difference, he’s not getting any rhythm at all and we kept serving them so hard and the pressure’s all on them the whole game and I think that made the biggest difference.”

The runner-up finish is marks the first podium finish for Evandro/Andre since finishing as the runner-up at the 2017 World Tour Finals. The duo squeaked out a 21-19, 24-22 victory over Spain’s 12th-seeded Pablo Herrera/Adrian Gavira in the semis to set up the meeting with the Dutch.

Herrera/Gavira secured their best FIVB effort since a runner-up finish at the Hague Three-Star in June, taking the bronze with a sweep of Samoilovs/Smedins.

No. 5 seed Barbara Seixas de Freitas/Fernanda Alves bested countrywomen No. 6 Maria Antonelli/Carol in three sets, rallying for a 16-21, 21-15, 15-9 win in an all-Brazilian final on the women’s side.

The gold medal marked the second of the year for the 2015 World Champions, following the title at the Fort Lauderdale Five Star on March 4. The pair reached the final with a three-set win over No. 2 seeded Canadians Sarah Pavan/Melissa Humana-Paredes in the semis.

“It’s just the beginning, man!” Barbara said. “We are really satisfied of course and we have been working hard for it. We are proud of our work and our team because they are pushing us to become better. Once you make your game better and right, it doesn’t matter who your opponent is.”

The silver was the second for Maria Antonelli/Carol, who also were runner-up at the Hague Four Star in January. The duo advanced to the championship match after outlasting third-seeded Germans Chantal Laboureur/Julia Sude in a three-set semifinal.

Laboureur/Sude went on to win the bronze, marking their first FIVB podium finish since winning the Gstaad Five Star in July 2017.