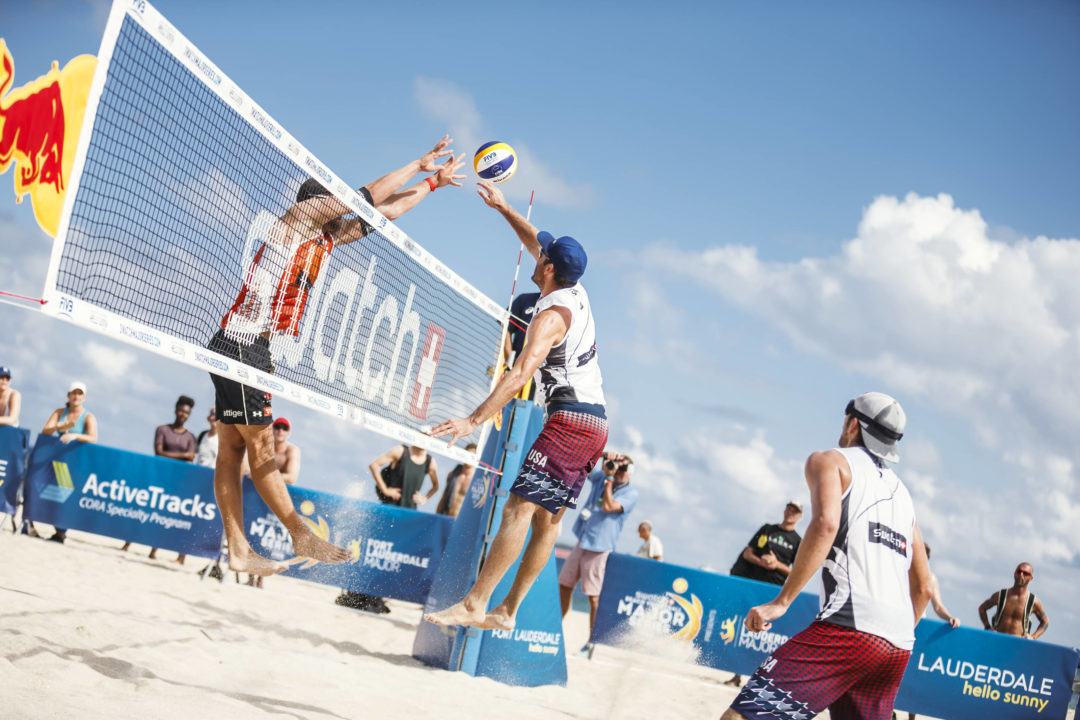 To find out about the business side of the series, how locations were selected and what makes the Fort Lauderdale Major special, VolleyMob sat down with Hannes Jagerhofer, CEO of the Beach Major Series.  Current Photo via FIVB

As the Beach Volleyball Major Series, the highest level of the FIVB World Tour, enters its fourth year, all eyes turn to Fort Lauderdale, Florida, for the first of four 2018 stops.

The men’s field includes a few surprises as 2017 champs Alvaro Filho/Saymon Barbosa of Brazil will begin in the qualifying phase of the tournament and new duo Alex Ranghieri/Marco Caminati of Italy earned a wildcard slot in the main draw.

On the women’s side, a new champion will be crowned with Brazil’s Larissa Franca/Talita Antunes out due to Antunes’ pregnancy. Hague champions April Ross/Alix Klineman (USA) claimed a spot in the main draw, while countrywomen Brooke Sweat/Summer Ross earned a wildcard entry.

To find out about the business side of the series, how locations were selected and what makes the Fort Lauderdale Major special, VolleyMob sat down with Hannes Jagerhofer, CEO of the Beach Major Series.

As beach volleyball continues to grow in popularity, how do you see the Beach Major Series fitting into that picture of continuing to grow the game worldwide?

The tournaments of the Beach Volleyball Major Series are not just pure sporting
events – it’s a lifestyle spectacle. Sporting performances of the highest level are
combined with unique entertainment on and off the court. The action on the court and the atmosphere inside the stadium guarantee a unique feeling. That’s why we say goosebumps don’t lie!

Obviously this is a business venture as well, how do plan to keep monetizing the popularity of the sport?

Every partner who has had the chance to experience an event of the Beach
Volleyball Major Series was absolutely fascinated by the unique experience. This has led to cooperations that have lasted for many years. Our job is to promote and
elevate the players and create superstars. We want to keep exposing more and more
people and sponsors to our event experience.

The FIVB increased prize pots across the tour in 2018. What is the importance of raising the purses? Do you think that will keep the best of the best competing and make this less of a hobby profession and into an actual career for participants?

Sponsors want to see full stadiums and these unique ‘goosebumps don’t lie’ moments which make for a very special atmosphere. For athletes, the prize money is, of course, a major source of income besides sponsoring, which, of course, allows them and the sport to become more professional.

Is there going to be a new sponsor this year, since the agreement with Swatch expired in 2017?

Swatch is still one of the main sponsors in Austria and Switzerland and they still have plans to invest in sports in the future. To be the title sponsor of a tour alone makes no sense for them, because we also organize tournaments in markets that are of no interest for the brand Swatch. In addition to Vodafone, we also have a number of interesting big brands that want to cooperate with us in the future.

How do you select the Major Series locations every year? Obviously spots like Gstaad have become tour mainstays. Why is that?

To become a location for the Major Series, some important requirements must be
fulfilled:

First, a city needs to be ready to pay a host city fee.

The second important requirement is to find a location with an environment where we can reach, with the necessary promotion, a full stadium and where we are able to create this unique goosebumps feeling.

Furthermore, it is important to find media that assure the necessary support to make the event a success.

It is also not a disadvantage when it comes to having a bit of weather security.
Plus, it always helps when there’s a local team who holds a good chance of making
the semifinal stage of the competition.

Fort Lauderdale is back in the series and there are many American teams on the start list. What does that location offer?

Fort Lauderdale is probably currently the best spot in the Beach Major Series. Apart from the fact that this tournament is the only one which is played on a real beach, we can find here everything for a recipe for success. A city that is fully behind it, including a breathtaking backdrop. Due to the weather conditions we also see ourselves able to perform night matches. Furthermore the US teams are very strong and that helps generate a lot of interest from fans who are able to pack the stadium every day.

Vienna hosted the 2017 Beach World Championships last year and is now making its debut on the Major series. Was the crowd and the success of that event what brought you to include that stop?

Vienna was for sure the biggest beach volleyball event in history following the
Olympics in Rio. There were 180,000 visitors and there was an unprecedented
euphoria for our sport. On the final day there were 25,000 people on the site and
50,000 waiting for admission outside and I think this says it all about the beach
enthusiasm in Vienna.

Hamburg is hosting the finals for the second straight year. What went into that decision?

The finals will act as another excellent rehearsal for the FIVB Beach Volleyball World Championships 2019, which will also take place in Hamburg.

The Hague Four-Star tournament brought exciting results to start 2018. How can you capitalize on that and continue to build the excitement for the first major event in Fort Lauderdale?

I think the players and spectators are really looking forward to the Fort Lauderdale
event. There will be more than 200 fans making the trip from Austria alone. Not only that, a large number of the teams will arrive two weeks before the event to
prepare for the tournament.