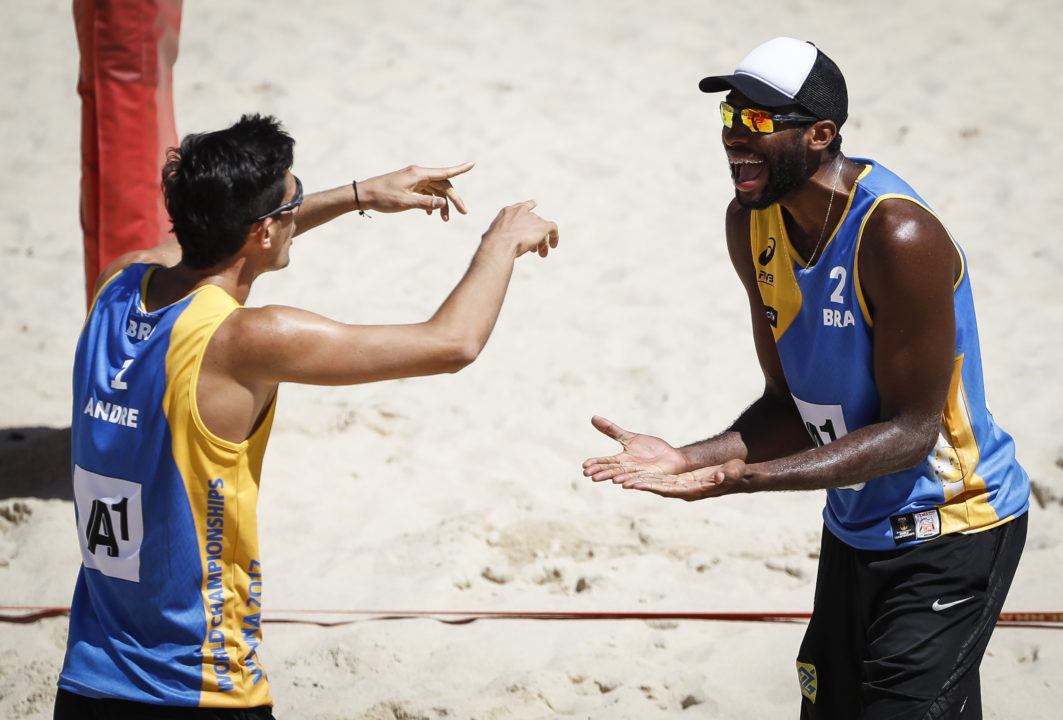 Opening day brought with it the thrill of victory for some competition newcomers and the sting of defeat for one of the favorites on the women's side. Current Photo via FIVB

Day 1 of the FIVB Beach World Championships is in the books.

Opening day brought with it the thrill of victory for some competition newcomers and the sting of defeat for one of the favorites on the women’s side.

Brazil’s Evandro Goncalves Oliviera Junior and Andre Loyola Stein spoke with the FIVB about the role believing in themselves played in their victory and how Evandro, playing in his third championship, used past experiences to guide his partner. Evandro/Andre came back from a set down to win 20-22, 23-21, 15-7 over their Dutch foes.

Brazilian Taiana Lima, who alongside partner Elize Maia upset countrywomen Barbara Seixas de Frietas and Fernanda Alvez 21-10, 16-21, 15-17, experienced a wave of emotions. Lima spoke of the uneasiness at first facing former partner Fernanda, the happiness about and importance of the win and the difficulty of their pol.

On the other side of the coin, Barbara offered perspective and hope for the rest of the tournament after the unexpected loss.

Not all of the talk was about wins and losses. Olympic champion Kira Walkenhorst from Germany shared about the comfort of reuniting with partner Laura Ludwig, the joy of winning and feeling at home in Vienna. Walkenhorst/Ludwig made quick work of their Moroccan foes on Friday.

Amazing plays also highlighted the day, like this one from Austria’s Clemens Doppler/Alexander Horst against Iran’s Bahman Salemiinjehboroun/Rahman Raoufi.