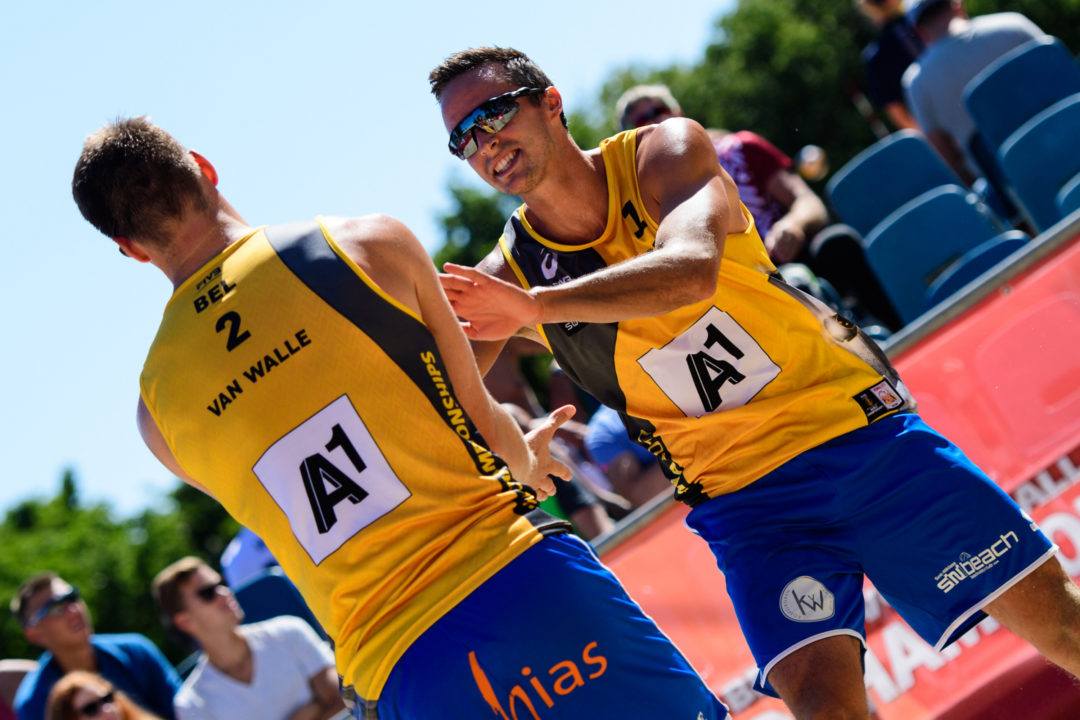 No. 12 Dries Koekelkoren and Tom van Walle of Belgium edged Latvia’s Edgars Tocs and Rihards Finsters 21-14, 19-21, 15-13 in one of just two three-set match on opening day. Current Photo via FIVB

Pool play action began at the FIVB Beach World Championships on Friday. The top two teams from each four team pool along with the eight best third place teams will move on to the round of 32.

Getting the action started on Friday were the teams from Pools B, D, F, I, J and L.

All seven of the teams seeded in the Top 12 that played, won. The closest matches came as No. 7 seed Evandro Goncalves Oliviera Junior and Andre Loyola Stein of Brazil came back from a one-set deficit to win 20-22, 23-21, 15-7 over wildcard Dutch side Christiaan Varenhorst and Maarten Van Garderen; and as No. 12 Dries Koekelkoren and Tom van Walle of Belgium edged Latvia’s Edgars Tocs and Rihards Finsters 21-14, 19-21, 15-13.

“It wasn’t a nice win, but it was an important win,” van Walle said. “We knew if we put them under pressure they would break, but if we didn’t do it we’d start bad like we did in the second set.  Then they start to play well and it gets really difficult when they are in rhythm.  You need to stay focused all the time.”

The remainder of the matches on Day 1were two-set affairs.

Dutch pair Alexander Brouwer and Robert Meeuwsen, seeded 10th, began their quest to get back their 2013 World Championships crown with a quick two-setter over a pair of qualifiers from Uruguay.

Five other sets of Olympians were in action, including Latvia’s Janis Smedins and Aleksandrs Samoilovs, who are back together competing at Worlds after Smedins missed the 2015 event with a knee injury. Samoilovs is making his sixth world championship showing.

Evandro of Brazil is playing with a new partner this year after splitting with his Olympic teammate Pedro Solberg in the offseason. Ninth place finishers Juan Virgen and Lombardo Ontiveros of Mexico squeaked out a close win over their Cuban foe.

Eleventh seeded Viacheslav Krasilnikov and Nikita Liamin of Russia are playing in their first world championships together after earning fourth and fifth respectively at the Rio Games.

Cerutti is a two-time world champion, having won with current partner Bruno Schmidt in 2015 and with Emanuel Rego in 2011. Alison/Bruno begin play in Pool A on Saturday.

Dalhausser, who won in 2007 with Todd Rogers and missed the 2015 championships due to injury, is competing with Nick Lucena, who placed fourth in 2015 with then partner Theo Brunner. Dalhausser/Lucena are competing in Pool C alongside fellow Americans John Hyden and Ryan Doherty.

The other two American teams in the field are: Taylor Crabb/Jacob Gibb (Pool G) and Theo Brunner/Casey Patterson (Pool H).