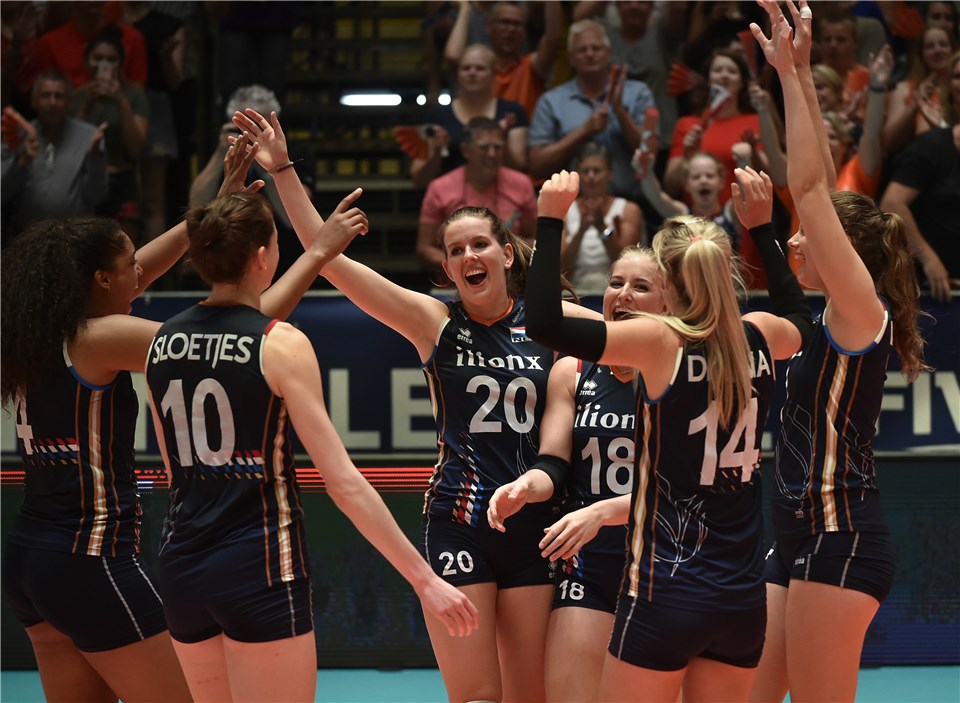 Four Brazilian players turned in double-digit scoring efforts as Brazil owned the net in a sweep of Poland on Wednesday. South Korea was overmatched in every facet of the game as the Netherlands nearly doubled the Koreans' point tally (75-40) in a sweep.  Current Photo via FIVB

Four Brazilian players turned in double-digit scoring efforts as Brazil owned the net in a sweep of Poland on Wednesday.

Malwina Smarzek and Agnieszka Kakolewska guided the Polish side with 18 and 10 points respectively. Smarzek accounted for 17 kills and an ace, while Kakolewska added seven putaways, two blocks and an ace. Natalia Medrzyk (8), Martyna Grajber (7) and Zuzanna Efimienko-Mlotkowska (5) rounded out the scoring. Medrzyk downed eight kills, while Grajber and Eimienko-Mlotkowska tallied six and five respectively.

Poland led at the first technical timeout of Set 1, but a balanced offensive attack put the Brazilians in front and kept them just ahead for the remainder of the 25-20 win, which was sealed on a Smarzek service error.

The teams played to a 10-all tie in Set 2 before Brazil pulled away, leading by four at 21-17 as Caixeta chipped in a pair of kills. Another Caixeta putaway gave the Brazilians a set-point try en route to a 25-20 win.

Poland took the early lead for the third straight set, going up 8-6 in Set 3. Brazil again found a rally in its pocket with Ana Da Silva and Tandara pacing the team to a 16-14 advantage. A service error clinched Brazil the 25-23 win and the sweep.

South Korea was overmatched in every facet of the game as the Netherlands nearly doubled their point tally (75-40) in a sweep.

Lonneke Sloetjes scored a match-high 16 points with 14 kills and two blocks. Anne Buijs added in 10 points on eight kills, a block and an ace. Tessa Polder served up five of the team’s 13 aces en route to an eight-point tally. Nicole Koolhaas led the team at the net with three blocks to go with two aces. Laura Dijkema chipped in three aces. The Dutch picked up the dominant win despite resting Celeste Plak, Yvon Belien, Maret Balkestein-Balkestein and libero Kirsten Knip.

Jeongah Park managed seven points to lead South Korea, all on kills. Four players – Juhyang Kim, Heejin Kim, Sohwi Kang and Eunjin Park – added four point efforts. Juhyang Kim and Kang notched four kills apiece, while Park added two kills and two blocks and Heejin Kim posted two kills, a block and an ace. Korea utilized 12 of its 14 players in the match, but could not get past the Dutch.

The Netherlands jumped out to a 4-0 lead in Set 1, only to see Koreans rally to take a 12-11 lead of their own. That sparked a Dutch onslaught, as Buijs and Sloetjes rained down kills in the 25-18 victory.

The home side scored the first four points of Set 2 and soon boasted an 11 point lead en route to the 25-10 drubbing.

Set 3 again was nearly all Netherlands as Sloetjes and Plak put the hosts up 11-3. It was a 10-point game at 20-10 and the Dutch ended the match on a 5-2 run to close out the crushing sweep.