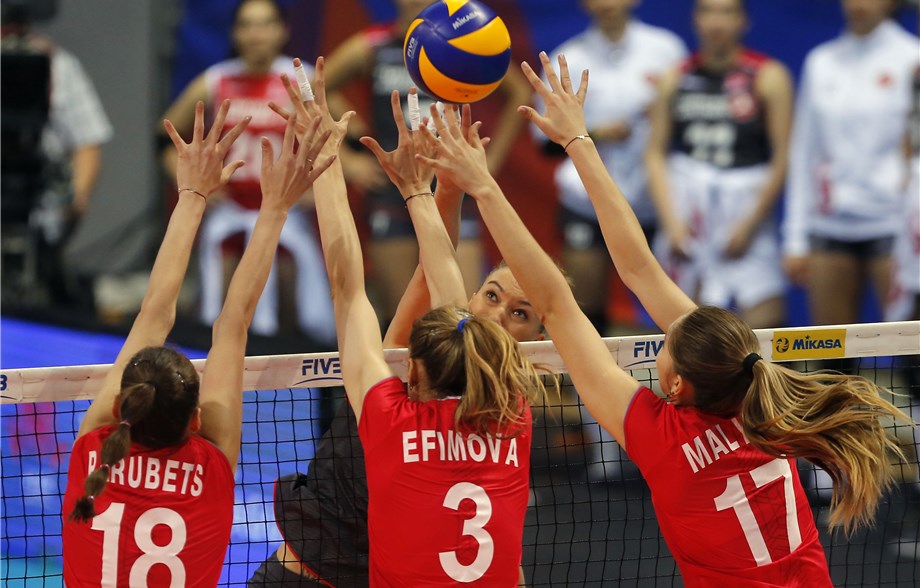 Russia boasted a 22-13 lead in blocks to rally for a 5-set victory over Turkey after falling behind 2-1 in the match. Serbia rode double-digit scoring efforts by Brankica Mihajlovic, Bojana Milenkovic and Stefana Veljkovic to an easy sweep of Belgium to keep pace atop the VNL leaderboard.  Current Photo via FIVB

Russia kept itself within striking distance of the Volleyball Nations League finals, moving into seventh place with 14 points, four behind Turkey, which remained in the top five despite Wednesday’s five-set loss with 18 points.

Russia boasted a 22-13 lead in blocks to rally for the victory after falling behind 2-1 in the match. The Russians also held a slight 54-52 edge in kills. For its part, Turkey owned a 12-8 lead in aces and 27-22 advantage in points off errors.

Irina Voronkova led all players with 20 points, notching 16 kills, three aces and a block, for Russia. Four other Russians managed double-digit scoring efforts: Ekaterina Lyubushkina (16), Natalia Malykh (16), Angelina Lazarenko (10) and Kseniia Parubets (10). Malykh turned in 12 kills, three blocks and an ace, while Lyubushkina was a force at the net with a match-high eight blocks, six kills and two aces. Lazarenko chipped in six stuffs and four kills, while Parubets rounded out the offense with eight kills and two stuffs.

Eda Erdem Dundar and Meliha Ismailoglu paced Turkey with 16 and 14 points respectively. Dundar kept Turkey in the match with seven aces, six kills and three blocks. Ismailoglu chalked up 12 kills, a block and an ace. Nine other players contributed at least one kill apiece to aid the Turkish attack. Ebrar Karakurt (7), Hande Baladin (7), Meryem Boz (6), and Seyma Ercan (6) were next on the team with six or more putaways. Coach Giovanni Guidetti went 13 deep on his 14 woman roster in the match looking for answers.

After a back and forth evening, the Russians jumped ahead 4-1 in the decisive fifth set. It was a four-point game midway through as Russia went up 10-6. In the end, an Olga Biryukova kill gave Russia the 15-11 win to seal the comeback effort.

After trailing 12-7 in Set 2, Turkey chipped away and tied it up 17. Putdowns by Boz and Baladin secured the 25-19 win and evened the match at a set apiece.

Russia went up 8-4 in Set 4 and soon boasted a 10-point lead at 16-6 as its block took form and put the set out of reach. Dundar served up six straight aces to keep Turkey close, but in the end, it s was not enough as Karakurt gave the Russians the 25-20 win and sent the match to tiebreak.

Serbia rode double-digit scoring efforts by Brankica Mihajlovic, Bojana Milenkovic and Stefana Veljkovic to an easy sweep of Belgium to keep pace with the United States top the VNL leaderboard.

Mihajlovic accounted for 16 points (14 kills, 1 block, 1 ace), while Milenkovic added 13 (9 kills, 3 aces, 1 block) and Veljkovic chipped in 10 (7 kills, 2 blocks, 1 ace) to pace the Serbs. Ana Bjelica downed eight kills, while Bojana Zivkovic put up a team-best three blocks in the win. Top scorer Tijana Boskovic and a handful of other starters had the night off.