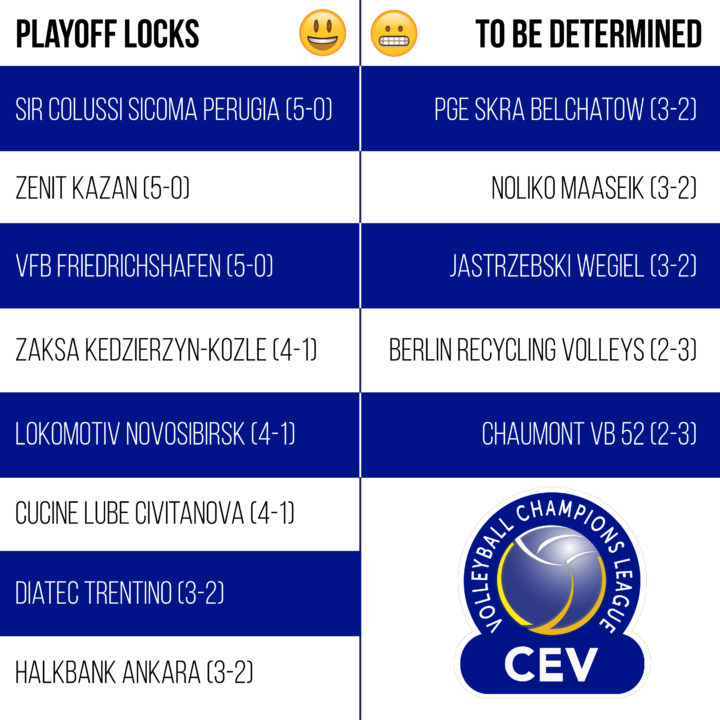 With only one more leg left to go in the Champions League pool stage, the battle for a coveted spot in the playoff stage heats up. A deep playoff run in one of volleyball’s most prestigious tournaments brings a lot of attention to a club, which can lead to more fans and new sponsors. Out of the 20 teams that have participated in the pool stage, 12 will make the playoffs. 8 teams have already guaranteed themselves a spot:

7 teams have been eliminated from contention, which means that 5 teams are fighting for 4 playoff spots. I’ll be explaining the scenarios in which each potential playoff team will make (or miss) getting to the next round.

The key matchups of our analysis:

After starting out 0-2, Belchatow has won their last 3 games and is all but guaranteed to make the next round. Srecko Lisinac has looked like the best middle in the tournament, operating as the first option for Belchatow and even hitting balls out of the back row. They will only miss the playoffs in the following scenario: Maaseik beats Trentino, Berlin beats Wegiel 3-1, and Chaumont beats them 3-0. This would mean 4 teams would be tied at 3 wins. In this case, ranking points are used as the tiebreaker (3 points for a 3-0 or 3-1 win, 2 points for a 3-2 win, 1 point for a 2-3 loss, and 0 points for a 1-3 or 0-2 loss). Belchatow and Wegiel would be tied at 8 ranking points. The next tiebreaker is your ratio of sets won and lost. In this scenario, Belchatow (10-12) would lose out to Wegiel (10-11). All these teams have poor odds to win their matches so all three of them winning so decisively would be unlikely.

Like Belchatow, Maaseik will only miss the playoffs under a specific set of circumstances. If Berlin and Chaumont both win and Maaseik loses to Trentino 3-0 or 3-1, then the Belgian team will not get to the next round with 3 wins and only 7 ranking points, while the other teams would have 3 wins and 8 or 9 ranking points. Maaseik is a recent Belgian Cup champion and is a veteran of the Champions League. Led by youngster Jolan Cox, they have dark horse potential in the tournament.

Another 3-2 team that will most likely be safe. Their path to losing their spot is similar to Belchatow’s. Wegiel must lose to Berlin 3-0, Belchatow must lose to Chaumont 3-0 or 3-1, and Maaseik beat Trentino. They would be tied with Belchatow with 8 ranking points and lose in set ratio, 9-11 vs 10-12.

The path for Berlin is tougher than the previously mentioned 3. If Berlin loses and Chaumont wins, they are out of the tournament no matter what else happens, as they would be the only 2 win team. If they both lose, but Berlin loses 3-0 or 3-1 and Chaumont loses 2-3, then Chaumont will make it with 7 ranking points and Berlin will miss with 6 ranking points. If they both lose 3-0 or 3-1, they will be tied in ranking points at 6 and Chaumont (10-15) will beat Berlin (8-13) in set ratio. Berlin will have a better set ratio if they lose 3-1 and Chaumont loses 3-0. Missing the playoffs would be particularly disappointing for Berlin, who made the final 4 in last year’s Champions League.