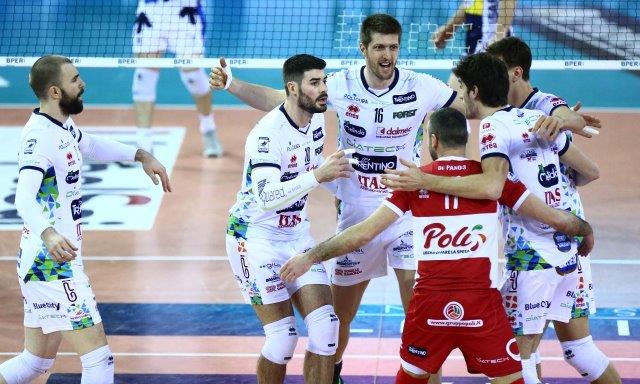 As the regular season comes to close, teams at the top of the standings jockey for playoff positioning  Current Photo via legavolley.it

Despite the return of opposite Andrea Argenta and a combined 16 points from the Ngapeth brothers (Earvin and Swan), Modena suffered their 2nd loss in the last 3 games. While Trentino is still unlikely to catch Modena in the standings, Stoytchev’s squad is showing some serious red flags that could come back to haunt them during the playoffs. They are having issues closing out games, unable to produce consistent attacks when the game is tight. This weakness was especially apparent against Trentino, where 4 out of 5 sets were decided by 2 points. Filippo Lanza deserves some credit for a professional 21 point performance that came just a few days after the Trentino lifer had been booed by his own fans after a champion’s league loss to Zaksa Kedzierzyn-Kozle.

Perugia has continued their complete domination of volleyball, winning both their SuperLega match and their Champion’s League match against Fenerbache Istanbul earlier this week. While the personnel of the club for next season is the subject of many rumours, there have been no signs of slow down for the current group. Ivan Zaytsev has definitely found his groove as a receiver, passing 35% of balls perfectly despite clearly being the target of Castellana’s servers. Aleksander Atanasijevic keeps on making his case as one of the best players in volleyball period, with an easy 10 kills and 5 aces.

A devastating loss for playoff-hopeful Kione Padova, who was defeated in 4 sets by Milano. Klemen Cebulj continued his run of impressive performances with 29 points, including 5 aces. It will be interesting to see how Nimir Abdel-Aziz will fit back into the offense of Milano with Cebulj operating so well with such huge volume. With Modena and Civitanova as 2 of their last 3 opponents, Padova’s playoff dreams have all but disappeared. We have our 8 playoff teams, barring any catastrophic collapses, which means the last 3 matches will be all about jockeying for position.

Milano can vault itself ahead of Verona and into 5th place with a 3-0 or 3-1 win against Verona. This would mean it could avoid a first-round playoff matchup with the three powerhouses at the top of the standings. Nimir Abdel-Aziz is set to make his return this week, making Milano a potential serious playoff threat. Aziz still leads the league in aces by 12, despite missing the last few weeks to an abdominal injury.