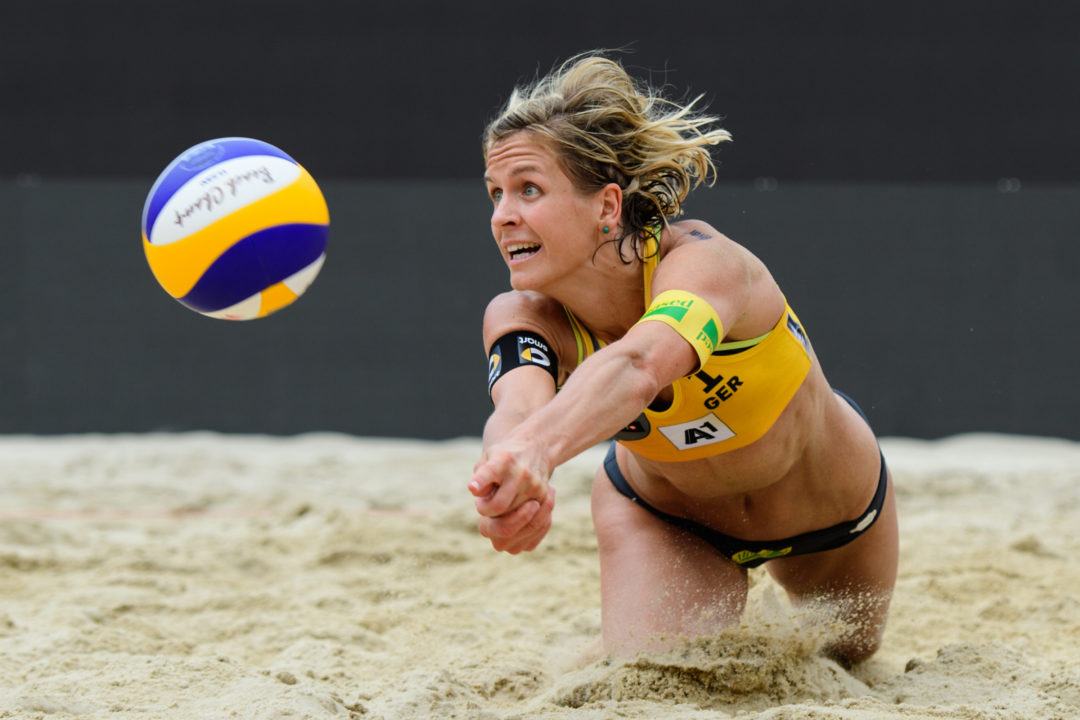 Defending Olympic gold medalists Laura Ludwig and Kira Walkenhorst are one of four teams on to the semifinals at the Beach World Championships. Current Photo via FIVB

April Ross and Lauren Fendrick are the lone remaining team outside of the Top 12 as the semifinal field was decided on Friday. Ross, who won Olympic bronze with then partner Kerri Walsh Jennings in 2016, and Fendrick moved into the final four with a win over Brandie Wilkerson and Heather Bansley of Canada.

Ross scored a match-high 20 points, with 13 kills and four aces, while Fendrick chipped in 13 kills, two blocks and an ace. The Americans outdid their Canadian foes in every facet of the game, 29-20 in kills, 2-0 in blocks and 5-2 in aces.

“It feels good to at least tie my career high, but our goal is to win this tournament, so it’s one more step in the direction,” Fendrick said. “Every win feels good and obviously nothing is guaranteed.  We are still working and focused. I am really excited to rest and recover here a little bit and go through the preparations and see what happens.”

“Yes, we’re back,” Ludwig said. “I like to say that. We are coming closer and closer to Ludwig/Walkenhorst Beach Volleyball and that’s what we wanted, that’s what we were aiming for this tournament and I’m so happy and satisfied that it’s working.”

While there was disappointment on the side of the Americans, Ross said this is a jumping off point for the duo as the season progresses.

“I wasn’t making enough moves on the block or the right moves,” Ross said. “It wasn’t our game, I got dug on a lot of rallies and they ended up winning the rally. They played really well, we didn’t play well and the combo showed in the score. We had so many good games here and I’m excited. This is a good way to finish this FIVB Tour and we’ll move onto Manhattan (Beach).”

“I think we are playing good,” Talita said. “I can’t say that no one can stop us, but if we play good together and strong, it is hard for anyone to beat us.  When I play against Brazil we try to do something different because we know each other so well.  We play here on the FIVB Tour and on the Brazilian tour.  Today we did better than them.”

No. 2 seeded Chantal Laboureur and Julie Sude were gracious in defeat to Pavan/Humana-Paredes in a match that saw the Canadians put up five blocks and split the offensive load with 11 and 13 kills respectively.

“We lost in two sets, we’re a little disappointed but they deserved to win because we didn’t play very well,” Sude said. “Of course we are disappointed we didn’t reach the semifinals, but all in all we found the rhythm in the World Championships so we are very happy about the result and the season is not finished yet.

The first semifinal will pit the Brazilians against the Germans in a rematch of the Olympic semifinal. The other match will pit the Americans vs. the Canadians for just the second time in FIVB action.

Both Ross and Pavan joined up with new partners in 2017. Pavan/Humana-Paredes won the lone previous meeting, topping the Americans at the Olszstyn Four-Star Event in July.