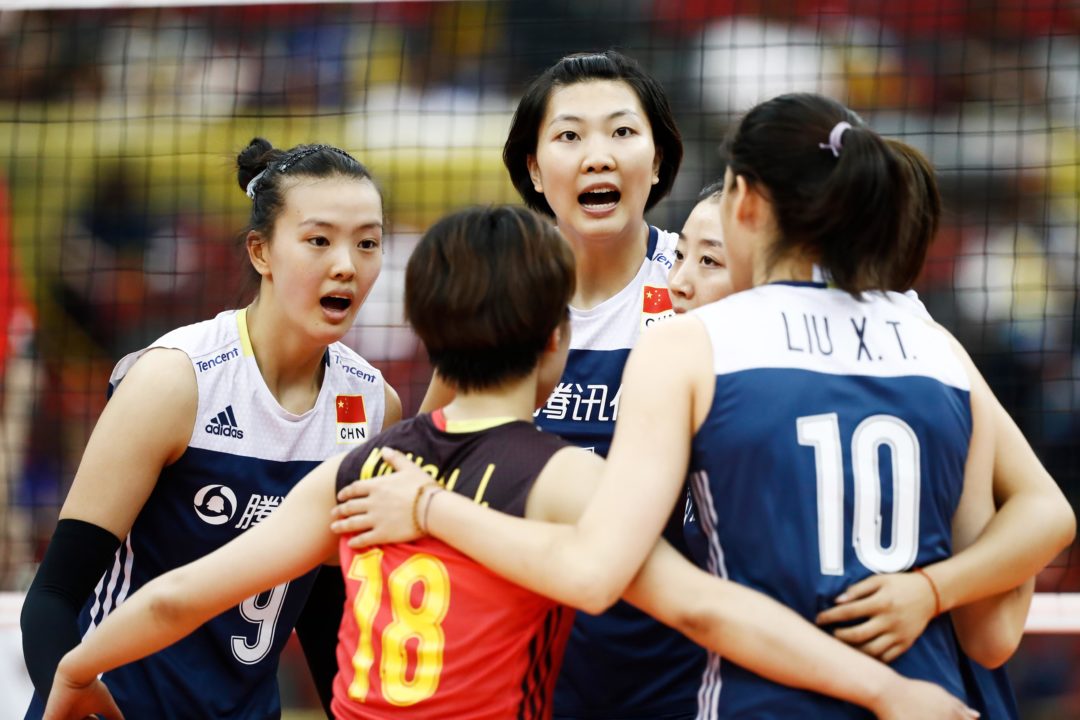 We have had some amazing blowouts this year, some of which we covered here on Volleymob. But while they are somewhat common in college play, or FIVB youth tournaments, due to the inevitable lack of parity between the teams, we don’t expect them at FIVB’s Senior International Circuit. Nevertheless, it’s just what happened in today’s game between China and Korea.

The Chinese opened up the second set of the game in an incredible 15-0 run, with Zhu Ting serving. Korea only got their first point from a service error by Zhu and could only score three more points before China seized the set. When all was said and done, Korea scored only 30 points against China, fewest for any team at this Grand Champions Cup edition. The Chinese won the blocking game 13 to 0, and only received 29 services the whole game, to Korea’s 68, showing what kind of match up the fans were treated to.

Here are the players’ post match reactions, doing their best to show diplomacy and sportmanship:

China captain Zhu Ting: Before today’s match, we had our coach’s instructions in our head and we were able to play as a tight unit of six players. It’s true I had a long stretch (15-0) of serving in the second set but we were just thinking about playing efficient volleyball.

Korean coach Hong Sungjin: Today, we lost to the power and height of the Chinese team. Once again, we were reminded that China is the best team in the world. My players are still learning and in today’s match it was important that our players learned many things. That was the reality of today’s game.

Korean captain Kim Su Ji: Our team consists mainly of younger players and the lack of experience really showed today. The Chinese are tall and we couldn’t compete with our lack of experience, but in saying that, today’s experience was valuable for this new team. We kept losing points in the second set. We couldn’t break through against their block. I just told my players to be brave in their play.

The game threw some cold water in FIVB’s wildcard and scheduling politics. Let’s not forget Korea was invited to the WGCC, hence, have no real business fighting against its top teams. The Korean squad is well in their way, just as we predicted before in our power rankings, to be the first team in WGCC history to lose all its sets in the competition.

Of all the seven Grand Champions Cup held, Korea received wild card entries by FIVB in five of them. Its best ever finish was a fifth place in 2009. For this year’s tournament, coach Hong Sunjin showed that he really did’t care for his team’s poor historical bad performances in it, as he choose to rest his stars for the 2018 Asian Volleyball Confederation’s World Cup Qualifiers, due to be help at the end of September. Instead, he is relying on what amounts to be a second or third string Korean team. This is a priority for him, as Korea is going through a very busy Asian volleyball schedule.

Kim Yeon-koung, one of the best players in the world and 2012 Olympic Game’s MVP, Heejim Kim, Jeongah Park, Hyo Jin Yang, and Sola Lee aren’t in uniform. They are by far Korea’s brightest stars. Thus, why did FIVB gift Korea with a wildcard, pretty much knowing they would go to the competition with a non-competitive team? This kind of politics only hurts the sport. They should have given the wild card to a team that would have make the tournament more interesting instead, such as 2016 Olympic Games’ silver medalists Serbia. Fans pay money in the expectation to watch a competitive match, not a massacre.