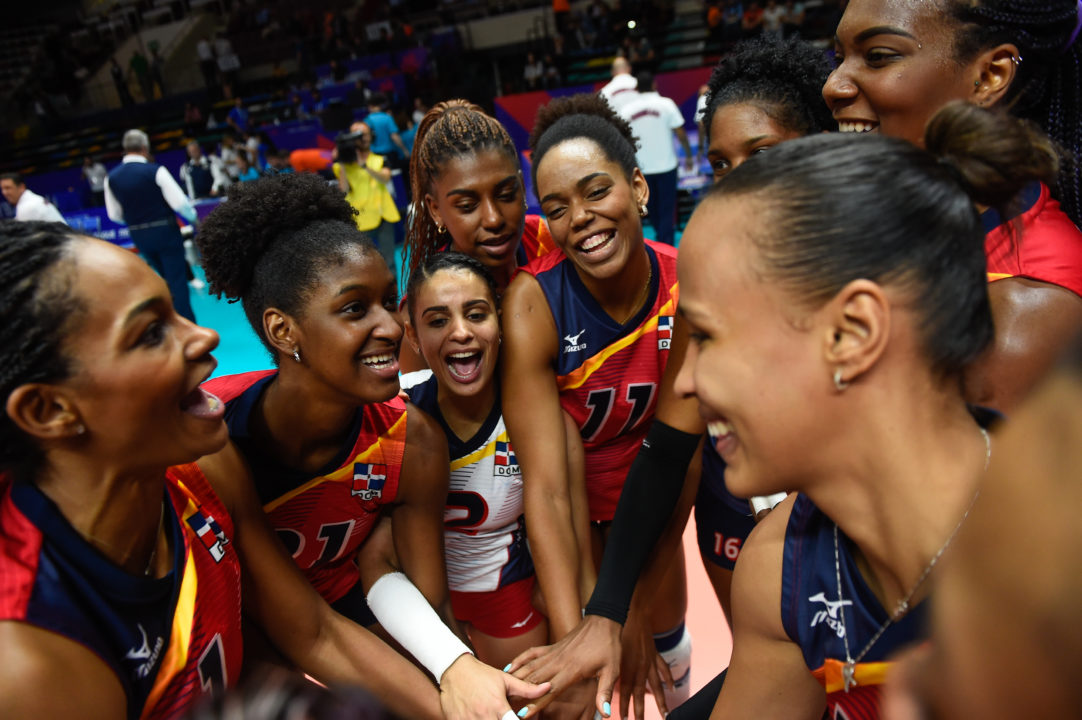 The Dominican Republic bested Argentina in every statistical category in a sweep for its first Volleyball Nations League win, while Brazil used its powerful offense to hand home-standing Turkey its first VNL defeat.  Current Photo via FIVB

In a match featuring two deuce sets, the difference came down to a point here and there. The Dominican Republic boasted a 49-47 lead in kills, a 5-1 edge in blocks, a 2-1 advantage in aces and had help from three more Argentinian miscues (21-18).

Yonkaira Pena and Brayelin Martinez paced the DR with 15 points apiece, each notching 14 kills and a block, while Annerys Victoria Vargas Valdez added 10 points with eight kills and two stuffs.

Anahi Florencia Tosi tallied 15 points, all on kills, for Argentina, while Elina Rodriguez (11) and Antonela Fortuna (9) tacked on nine kills apiece. Rodriguez also served up the team’s lone ace and accounted for the team’s sole block.

The Dominican Republic held a slight advantage at 8-7 and 16-15 in Set 1 and built a three-point edge at 20-17, but Argentina charged back with a 6-1 run to jump ahead 23-21. Argentina won a challenge on a pending set-point call to tie it up at 24, but Martinez came through in the clutch with two putaways to seal the 26-24 win for the DR.

Argentina boasted the lead at both technical timeouts and had a set-point try at 24-21, but couldn’t hang on as the Dominicans rattled off five straight points before eventually stealing it away at 26-24.

The DR built a 14-10 edge midway through Set 3 and kept things rolling to its first Volleyball Nations League win.

Brazil poured on 22 more kills (65-43), but Turkey did not go quietly in suffering its first loss of the Volleyball Nations League in front of rowdy home crowd of 2,500. Head coach Giovanni Guidetti went deep in his bench to keep the match going, playing 13 of his 14 rostered players.

After a knot-up at 6 in Set 1, Brazil was off to the races with a seven point lead by the second timeout as Tandara caught fire and continued to blast away en route to a 25-17 win.

After trading points early, it was a 6-0 run that gained the Brazilians some breathing room at 10-4. The lead was short lived, however, as Turkey charged back to knot it up at 17-all. Brazil notched the final rally, however, stealing back the set at 25-19 with help from a pair of Drussyla putaways.

Turkey found itself at the intermission, bolting to a 6-2 lead in Set 3. Brazil chipped away, erasing the deficit, tying the score at 10 en route to a 13-11 lead of its own. The Turkish side, fueled by the crowd, Guidetti and Brazilian miscues, snagged the 25-23 lead to extend the match.

Brazil trailed 8-7 in Set 4, before turning things around with 9-3 run. Trailing 16-11, Turkey fought back to within two, but could not break through, falling 25-21 to fall into the loss column for the first time.