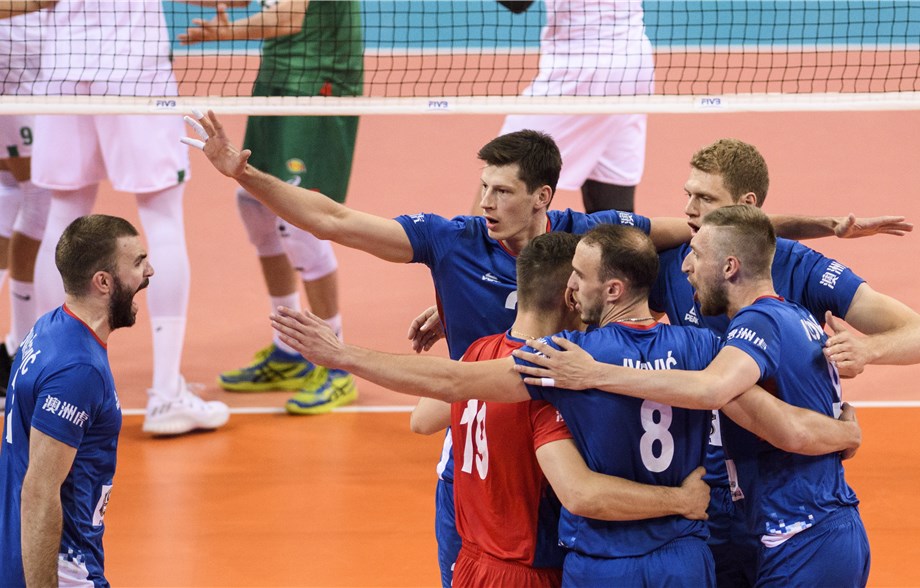 Russia took advantage of 36 Australian errors and boasted an 11-4 lead in blocks in a four-set win on Friday. Forty Bulgarian errors helped fuel Serbia in a five-set comeback victory.  Current Photo via FIVB

Russia took advantage of 36 Australian errors and boasted an 11-4 lead in blocks in a four-set win on Friday.

Those two factors helped the Russians overcome a deficit in kills (48-39) and aces (7-3). Russia gave away 27 points on errors.

After falling in the first two sets, Australia found its footing in Set 3. Russia led 8-7 at the first technical timeout, but Richards and Williams took control for the Aussies and grabbed a 25-18 win.

Down 8-2 in Set 4, Russia snapped out of its lapse, scoring eight of the next 11 points to draw within one at 11-10. From there, the Russians returned went on to victory.

The nine-point differential in points off errors (40-31) offset a 54-49 Bulgarian edge in kills. Serbia also boasted a slight 9-8 advantage in aces.

Drazen Luburic notched 20 points to lead four Serbian players with double-digit scoring tallies. Srecko Lisinac (14), Petar Krsmanovic (12) and Marko Ivovic (10) rounded out the group. Uros Kovacevic chipped in nine points to round out a balanced Serbian attack. Luburic was dominant on offense with a match-high 17 kills to go with three aces. The rest of the group posted seven or more putaways: Lisinac (9), Ivovic (8), Krsmanovic (7) and Kovacevic (7). Lisinac was the team’s top blocker with five. Krsmanovic served up three aces and added two blocks.

Bulgaria suffered an epic collapse in Set 5, leading 10-5 and earning two match-point tries before falling 16-14 on a Krsmanovic ace.