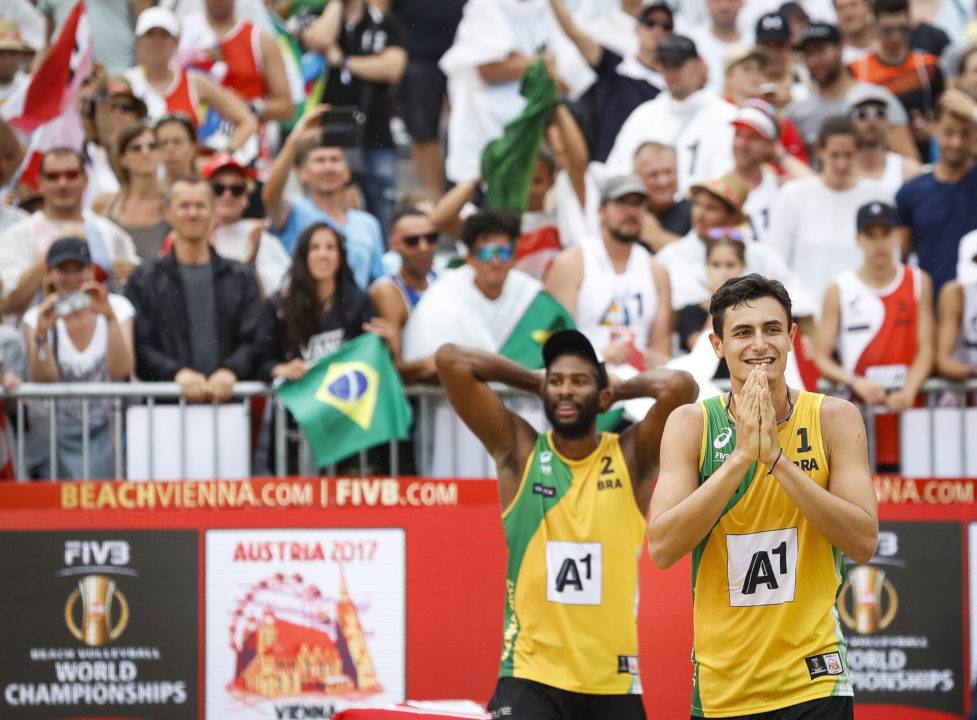 The final day of the 2017 FIVB Beach Volleyball World Championships, featuring the men’s semi-finals and medal matches, lacked the overall drama that the women saw in their championship rounds. All four of the day’s matches were decided by 2-0 scores. The championship match, at least, was still incredibly competitive with both of those sets being pushed into extra points before Evandro/Andre eventually disappointed the home crowd and knocked off Doppler/Horst 2-0 to take gold.

That marks Brazil’s 7th gold medal, and 14th overall, at this version of the beach World Championships. In 11 tournaments, Brazil is the only nation to have won more than one men’s title. For both Evandro Oliveira and Andre Stein, however, this is their first – Oliveira took bronze last year with then-partner Pedro Solberg.

Evandro and Andre bulled their way into the final with a relatively-easy victory over the Dutch #2 pair Varenhorst/Van Garderen. The Brazilians hit a whopping 68%, as the Dutch had trouble earning side-out on the Brazilian serve.

Meanwhile, the Netherlands had no aces and Andre had no problem handling the lions-share of their serves, all while having just 2 hitting errors and 1 shot blocked in 29 swings.

Inspired by a sell-out center court crowd of 10,000+, the Austrian 12th seeds plowed through to create more history in Vienna. Not only are they the first Austrian team, male or female, to ever make the semi-finals of this tournament, they won to become the first to ever play for gold in the 20-year old tournament.

In the first set, the Russians served primarily at Clemens Doppler, and he responded by landing 12 of his 15 shots.

The Russians eventually tried to shift their strategy late in the 2nd set, but not before Doppler landed another 10 of his 11 shots.

Horst struggled relatively speaking (hit only 40% in the 2nd set, had 5 service errors in the 2nd set), but he did just enough to support his teammate to the win.

In total, Austria had 6 aces to just 2 for Russia, and Russia out-blocked Austria 3-0.

The Russians had won the teams’ prior matchup this season, in extra points in a tie-breaker set, at the Ft. Lauderdale major. 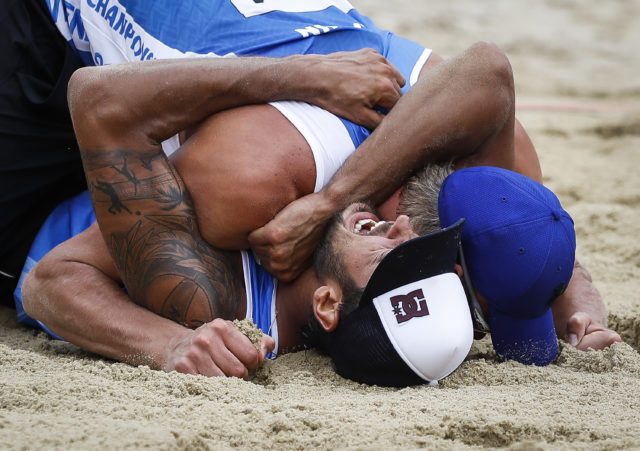 In the emotionally-challenging final-day format, Russia had to recover from their semi-final loss and quickly turnaround and play for bronze against the Dutch. Besides the significant upgrade in prestige from 4th place to ‘on the podium,’ the difference between winning and losing makes a $7,000 difference in prize money.

The Russians were successful in their quest, beating their Dutch opponents 2-0 for the second medal in the country’s history at this tournament – the last being a silver in 2007.

“It’s good to have such a victory after our defeat in the semifinals. Playing against the Austrians and their home crowd in the semifinals was tough for us, it was really hard to keep our focus. Nikita played a great tournament and our coach and our staff also did a great job on preparing us.”

After what seemed to be a tactical mistake in the semi-finals, in the finals Russia again targeted the Dutchman, Van Garderen, who hit better in the match. This time, though, Russia was able to jump to early leads thanks fo strong passing and big serving (14-9, 14-8 openings, respectively) and then trade side-outs with the Dutch until they eventually won. 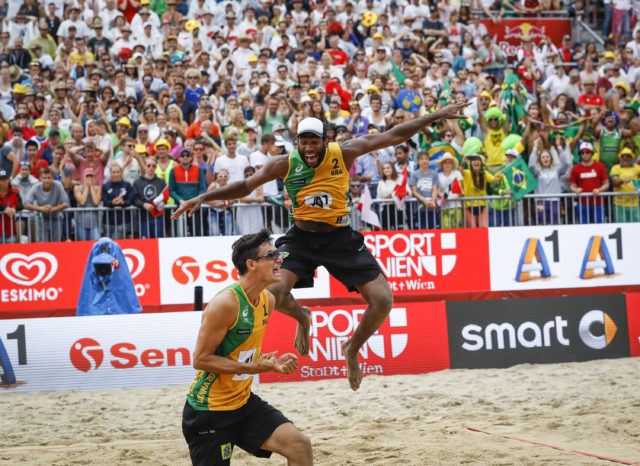 Another huge service day from Evandro Oliveira of Brazil led them to a 2nd win. Brazil had 7 total aces in the match, including 6 from Evandro.

“I’ve been training really hard with my serving, something I’ve done for awhile,” Evandro said. “It’s nothing new for me, the last two years I’ve been serving well on the World Tour. At the end of the first set it was good to have some serves that changed the game a little bit but this is not all about me. My coaching staff, may partner Andre, they all helped me get better so it’s not just my serves, it’s my serves and my staff. The last tournament we played before the World Championships was Poland and we did really bad. Being the more experienced of the two of us I knew that when he got here, it’s a new tournament, a new story so we were really strong mentally for this tournament. All we wanted was to play well every match and we actually went further than we expected to, so when we got to the finals it was just something that every athlete wants. I have this strong feeling of giving this gift to Andre and help making him the youngest World Champion, this is amazing.”

His partner Andre, stepped up in the match with 4 blocks, as many as the other three players in the match combined, which makes him the youngest Beach World Champion at just 22 years old.

“I didn’t know about that so I’m really happy and emotional about that but there’s no way I can talk about this game and this tournament without talking about what Evandro did, especially in the first set when he got those aces,” Andre said. “I look at him now and I see a superhero. He made the difference not only in this game but in the entire tournament.”

Doppler had 25 of the team’s 34 points, including 21 kills, 3 blocks, and an ace. But the Austrians made too many errors – 13 in just 2 sets – forced mostly by Evandro’s service, and that was enough to give the Brazilians the match.