FIVB Volleyball Nations League to Make Debut in May 2018 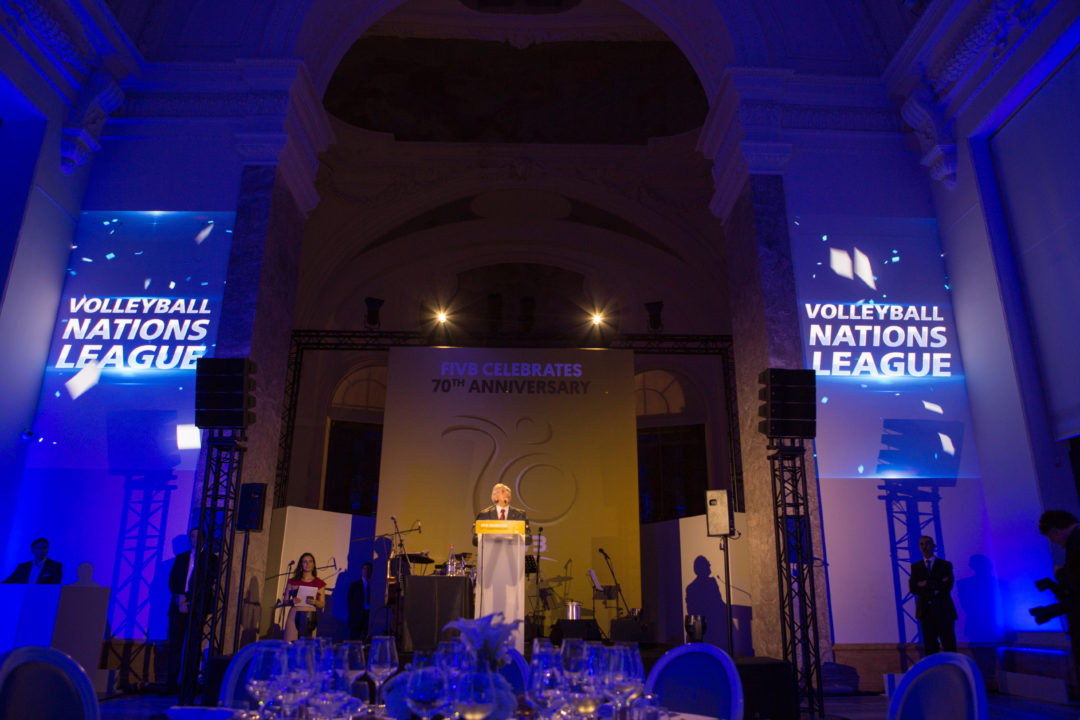 As part of the FIVB's 70th anniversary celebration in Paris, the organization announced the formation of the Volleyball Nations League, a 16-team, 130 match round-robin slate for men and women set to begin in May 2018.  Current Photo via FIVB

As part of the FIVB‘s 70th anniversary celebration in Paris, the organization announced the formation of the Volleyball Nations League, a 16-team, 130 match round-robin slate set to begin in May 2018.

The league, a joint project between the FIVB, IMG and 21 national federations, will featured 16 men’s and 16 women’s teams, with 12 on each side being designated as core teams and four as challenger teams.

Each team will play a minimum of 15 matches and each of the 12 core nations will play host to at least one pool of matches during the eight-week season from May to July, 2018.

On the men’s side, the core teams are: Argentina, Brazil, China, France, Germany, Iran, Italy, Japan, Poland, Russia, Serbia and the USA. The four challenger teams are: Australia, Bulgaria, Canada and South Korea.

Left out from the 12-team 2016 Olympic field are: Mexico, Egypt and Cuba. Brazil took the gold, besting Italy in the championship match, followed by the United States (bronze) and Russia (fourth). France won the 2017 World League title followed by Brazil, Canada and the United States.

On the women’s side, the core nations are: Brazil, China, Germany, Italy, Japan, the Netherlands, Russia, Serbia, South Korea, Thailand, Turkey and the USA. The four challengers are: Argentina, Belgium, the Dominican Republic and Poland.

The tournament is thought to be a replacement for both the men’s World League and women’s Grand Prix tournaments. Joining the events under one name for men and women. The payout for the winning teams will be equal across genders.

“This is a pivotal moment in the future of our sport,” FIVB president Dr. Ary S. Graca said at the announcement. “The Volleyball Nations League is the most important competition in the FIVB’s history and will revolutionize how volleyball is presented; making it more fan-centric and placing our fans, both inside and outside the stadium, at the very heart of the action.

“The FIVB has enjoyed great success over the last 70 years; volleyball has grown to become one of the most popular and widely practiced sports in the world. But, we must always look forward and find ways to evolve and innovate as we aim to become the world’s number one family sport. The Volleyball Nations League will help us to achieve our vision and set the standard for athlete and viewer experience.”

With IMG on board as producer and rights holder, the tournament will be broadcast digitally with “new and diverse angles,” and in a easily digestible fashion.

The FIVB also is hoping to boost fan support and in-venue interactions with “active engagement,” keeping fans involved in every rally by imitating match situations.

In addition to the introduction of the Nation’s League, the FIVB announced a second league, the Challenger League, which will include promotion and relegation, to keep the level of play as competitive as possible.