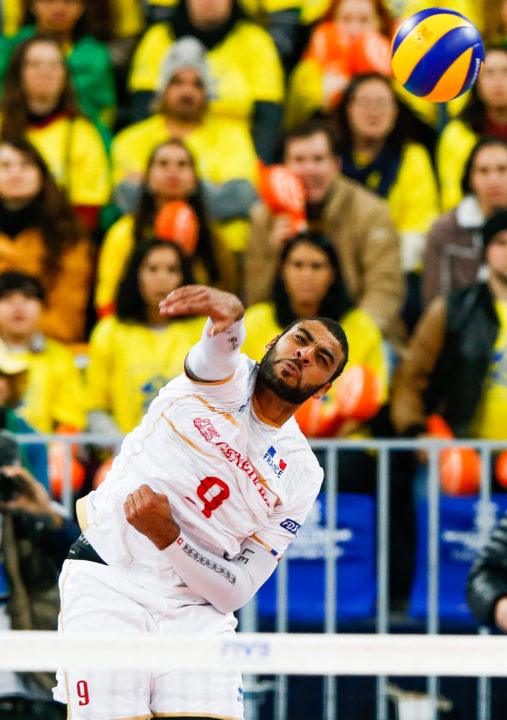 France wins the Gold at the 2017 FIVB World League after winning a thrilling five-set match with Brazil. Current Photo via FIVB

In 2006, Brazil defeated France 3-2 for the FIVB World League title. This time around, it was the French side that came out on top in five sets. Earvin Ngapeth starred in the match for France, as he was named the tournament’s MVP and best outside hitter shortly after the matches’ conclusion.

The reigning Olympic champion Brazil was in their fifth World League final in seven years. However, the last five times now have been losses for the South American side. For France, it was their second ever World League title with the first coming two years ago.

These were the two best teams throughout the entirety of the tournament, with France coming in at 11-1 and Brazil at 9-3. In front of a sea of yellow, the teams treated the audience to a treat of a match. It was suspenseful, it was emotional and most of all, it was competitive.

Just as it ended, France started the match with a bit of a surprise, as Trevor Clevenot, not Julien Lyneel got the start. For Brazil, the starting lineup was consistent with what they had been putting out to begin the match of late.

With both teams trading the lead in the first, neither could collect a multi-point edge until Brazil ran off a 4-0 stretch to take a 17-14 lead. Brazil would hold that three-point edge until Mauricio Souza registered a block on Clevenot for a four-point cushion. At that point, even an out-of-reach ball that deflected into a camera and caused a re-do could save France. Souza would put down the final kill from the middle as Brazil won the first 25-21.

The French side responded with a quick 5-1 start in the second. They held that difference until Stephen Boyer rejected Mauricio Borges to jump ahead 12-7. Brazil’s deficit only increased, even reaching double-digits where it ended at 25-15. For a French side that has struggled at times in the tournament with putting down blocks, they logged six to Brazil’s none in the set, which tied the match at 1-1.

France handled the strong Brazilian serve well on the day, and had an early 9-3 run to give them a 10-5 lead. Later on, it looked as if France was going to go up 19-14 when Brazil hit a ball long, but on review the ball touched the back line, changing the score to 18-15. They would win the next two to close within a point. Eventually Wallace De Souza (22 points) threw down a kill to tie the match at 20, and he wasn’t done either. He hit a cross shot for a 21-20 advantage as the crowd erupted. However, Brazil couldn’t use the energy as they had two straight unforced errors. Wallace amended the mistakes with another kill to tie at 22, but Earvin Ngapeth threw a windmill shot off the block to rotate the lead back to the European side. In what seemed like a one-on-one between Wallace and Ngapeth, it was the French player who had a kill to give his team a set point at 24-23. Then, Ngapeth paired with Kevin Le Roux (eight points, four blocks) for the set-winning block. In total, Ngapeth gathered eight points in the third to give France a 2-1 set lead.

Heading into the fourth, Brazil decided to utilize a lineup that included both liberos. It worked well as they jumped all over France in the fourth, going up 8-3 at the first technical timeout. Using the break, France regrouped. A serve by Boyer hit the tape and just squeaked over the net, falling in between the defense to lessen Brazil’s lead to two at 11-9. Wallace provided another thumping shot though moments later to balloon the lead back to four. Brazil would carry that through and come out on top 25-19 to force a fifth and decisive set.

Ricardo Lucarelli (22 points) got Brazil off on the right foot in the fifth, with the first four Brazilian kills.  Through 14 points though, the match was even at seven. A handful of points later, France was trailing by a point. Wallace struck one so hard off of Ngapeth in the back middle that it lined over the Brazilians and into the back corner of their side of the court. The incredible shot was compounded by a Lucarelli shot that went long and an overpass by Brazil that was put down by Barthelemy Chinenyeze for a 13-11 France lead. Ngapeth would make it 14-12, before Brazil would stay alive at 14-13. On match point it wasn’t Earvin Ngapeth, who had a match-best 29 points, to take a swing. Nor was it Stephen Boyer, who had 18 points and was one of the tournament’s top scorers. Again, it was a bit of a surprise as Clevenot got the opportunity. He put it down for his 12th and final point as jubilation immediately spread through the French team.

In total, France ended the match on a 6-2 run. It’s the second title in World League for France who won their first in 2015, when they also did so on Brazilian soil. They also finish the tournament at 12-1 – a remarkable run considering every other country had at least four losses.