France and Germany Sit Atop Pool A, To Compete for Tie-Breaker 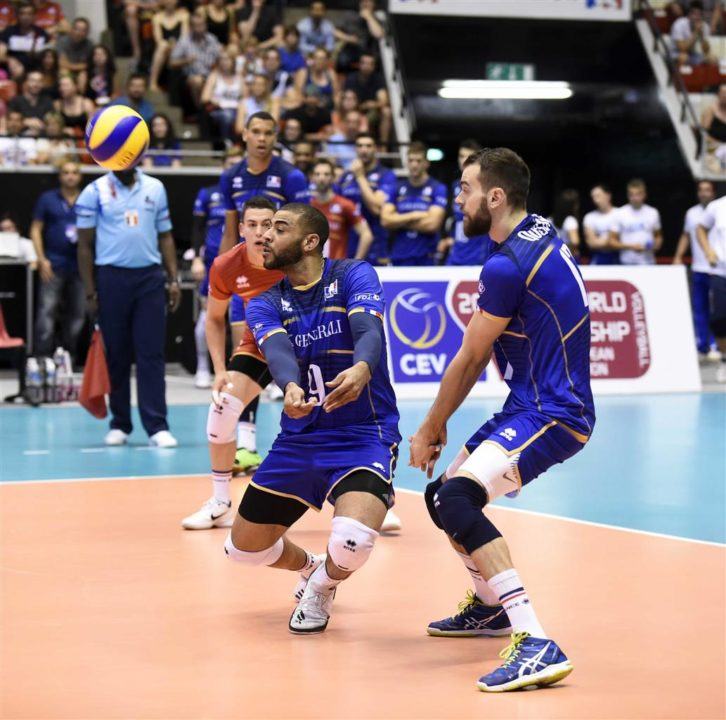 France and Germany to play for first place in Pool A with winner advancing to the third round of qualification. Current Photo via CEV

POOL A IN FRANCE

#1 France and #7 Germany are tied for first place in Pool A with perfect records, with the tie-breaking game determining who will advance to the third round of qualifications.

Ukraine’s Head Coach Ugis Krastins was happy with the way his team performed, “We didn’t play a perfect game but I am happy with the players’ attitude, they kept the concentration high all the time. We lost two games with our starting six, so now everyone will be having some playing time.”

In the first set, Ukraine used five service aces to roll to a 25-12 set win. Iceland kept the second set close all the way to 8-9, before Ukraine’s physical play at the net gave them the second set win 25-19. Ukraine showed its dominance over Iceland with a 25-15 win in the third and final set.

#1 France saw input from its whole roster as the team rolled to a 3-0 sweep over #37 Azerbaijan, 25-16, 25-17, 25-15. France’s opposite hitter Stephen Boyer was the top scorer of the match, finishing with 15 kills, one service ace, and three blocks. “I had perfect sets, and that’s why I performed at such level, but the whole team performed really well. We managed to save precious rest time before tomorrow’s match.”

The first set saw France take an early lead and hold on to it to finish with a 25-16 set win. The second set was a lot like the first and once again saw France toll to a 25-17 set win. France’s tough serving (eight service aces in total) gave Azerbaijan trouble in the third set as they would fall to France 15-25.

The first set displayed Germany’s world-class playing ability as they rolled to a 25-17 set win. However, the second set saw both teams exchanging points with Turkey taking the lead at the middle of the set and keeping it util the second technical timeout. Germany then capitalized off of Turkish errors to come back and take a 25-20 set win. In the third set Turkey played well and found themselves on top 23-19. Germany used a 6-0 scoring run to close out the third and final set 25-23.

Captain and setter of the German team, Lukas Kampa said that defense played a key role in the team’s win, “We controlled the match when we defended well. I am happy that we won the third set because it was maybe the first time we had some problems here and we managed to come back and keep the game short. It’s a good exercise because for sure tomorrow we will face complicated situations. This match is decisive for the qualification and France showed here that they are confident and they have a strong team. I think that we are prepared too, let’s see how it goes tomorrow.”