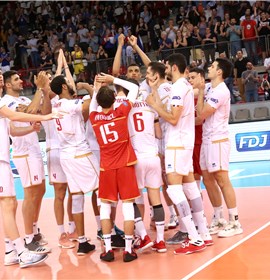 Lincoln Williams scored a match-high 18 points, but it was not enough to help Australia overcome 24 errors in a 3-0 loss to Iran. Japan gave away 28 points on errors and trailed France at the net in kills and blocks in a four-set loss. Current Photo via FIVB

Lincoln Williams scored a match-high 18 points, but it was not enough to help Australia overcome 24 errors in a 3-0 loss to Iran.

The Iranians scored 24 points on Aussie miscues, while also besting their foes 42-40 in kills and 5-4 in blocks. Both teams served up five aces. Iran limited its errors to 15.

Williams downed a match-leading 17 kills and added an ace, while Luke Smith also scored in double-digits (12) with nine kills, two aces and a block. Beau Graham was next on the team with six points, including a team-high two blocks.

Set 2 was a back and forth battle with ties at 6 and 14. A pair of Williams putaways gave the Aussies a two-point edge, but again they could not hold on, falling 25-23 on a Shafiei putaway.

Japan gave away 28 points on errors and trailed France at the net in kills and blocks in a four-set loss.

The French boasted a 54-51 lead in kills and a 10-6 advantage in blocks, plus earned eight extra points on miscues (28-20) in the win. Both teams served up three aces.

Yuji Nishida and Naoya Takano led the Japanese charge with 15 and 11 points respectively. Nishida notched a team-high 13 kills and two blocks, while Takano turned in eight kills, two aces and a block. Issei Otake added nine points, all on kills.

France jumped ahead 5-1 in Set 1 and upped its advantage to eight points midway through at 16-8 as Boyer and Tillie excelled offensively. Japan rallied, but fell short in a 25-16 score.

The Japanese turned the tables in Set 2, scoring five of the first six points. The teams were level at 6, but Japan countered to grab a four-point lead at 16-12. France was within three at 22-19, but Boyer proved his humanity with a serve into the net to give Japan the 25-20 victory.

It was just a one-point game at 12-11 in Set 2, but the French came through in front of their home crowd to clinch it 25-20 on a Tillie putaway.

France led 10-4 in Set 4 as Barthelemy Chinenyeze got in on the offensive action. In the end, it was a Japanese miscue the sealed the match at 25-22.