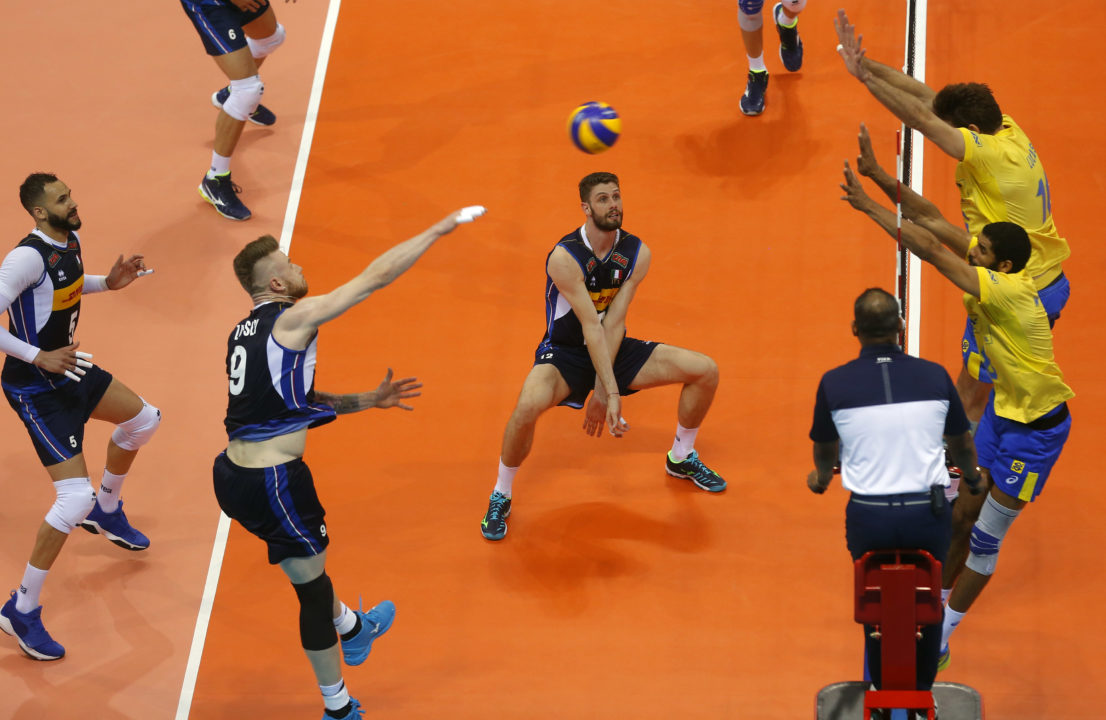 Italy served up 14 aces and put up 12 blocks, while Ivan Zaytsev racked up a tournament-best 32 points to lift the team past World #1 Brazil in five sets on Saturday. Drazen Luburic and Uros Kovacevic teamed up to lead Serbia to a four-set victory over Germany. Current Photo via FIVB

Italy served up 14 aces and put up 12 blocks, while Ivan Zaytsev racked up a tournament-best 32 points to lift the team past World #1 Brazil in five sets on Saturday.

After missing out on an opportunity to close out the match in Set 4, Italy dominated the decisive fifth set, capping the win on a reverse one-handed tip shot by Giannelli. The Italians surged ahead 8-3 behind Zaytsev and Juantorena and never looked back en route to the upset.

Brazilian coach Renan Dal Zotto switched up his lineup in the match, putting four new starters from Friday on the court, but the team did not miss a beat, cruising to a 25-18 Set 1 victory.

Italy turned the tables in Set 2 with Zaytsev starring and Juantorena earning the final kill as a touch was awarded in a challenge.

Brazil led early in Set 2, but a string of aces by Zaytsev put Italy on top 13-10. Nelli followed with three aces of his own which lifted Italy to the 25-21 win and a 2-1 lead in the match.

Dal Zotto went back to his match 1 starters to try to save the day and it worked momentarily, but Italy rallied and thwarted a pair of set point attempts, before falling 26-24 after the Brazilian block showed its colors.

Drazen Luburic and Uros Kovacevic teamed up to lead Serbia to a four-set victory over Germany.

Luburic pounded down 18 kills and served up three aces to score a match-high 21 points, while Kovacevic added in 14 kills, two blocks and an ace (17 points). Marko Ivovic (12) and Srecko Lisinac also were key in the victory with nine kills and a match-high four blocks respectively.