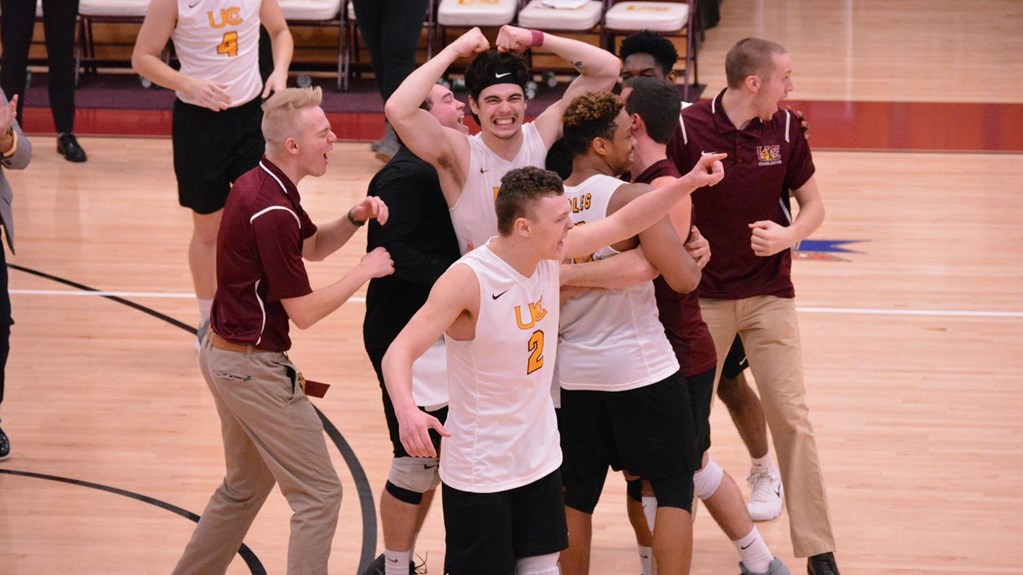 No. 19 Concordia-Irvine rallied from down 2-0 to score a five-set home win over No. 17 UC San Diego, while... Current Photo via Charleston (WV) Athletics

No. 19 Concordia-Irvine rallied from down 2-0 to score a five-set home win over No. 17 UC San Diego, while No. 5 Loyola and Charleston (WV) also picked up five set victories at home.

No. 20 George Mason and No. 8 Lewis also held home court, winning via sweep.

It Was Over When: George Mason built a five-point lead early in Set 3 at 9-4 and held the advantage at 13-8, before Barton scored four in a row, with two Angelos Mandilaris kills and one from Leary to cut the margin to one at 13-12. The Bulldogs tied it up at 16 and the teams traded points over the next 12 points, leading to a 22-all tie. The Patriots ended the set on a 3-0 run, capped by a Jack Reese kill and Luis Velez ace.

Key Stats: Charleston earned their first ever EIVA win in three seasons in the league with the five-set thriller. The Golden Eagles won the match despite being outhit .239 to .198 and facing a 61-48 deficit in kills. Charleston made up the difference with a 9-6 lead in aces and an 11-6 edge in blocks. Princeton outhit Charleston .455 to .333 in the final stanza, but came up short.

Stat Leaders: A balanced attack with three double-digit kill totals led the Golden Eagles to the historic win. Senior outside Ryan Santos (13), freshman outside Max Senica (11) and junior middle Eugene Stuart (10) made up the group. Stuart hit at a team-high .438 clip and notched six blocks, while Santos served up five of the team’s nine aces. Sophomore middle Adriel Roberts turned in five kills and five blocks.

It Was Over When: The teams split the first 12 points of Set 5, before Charleston vaulted ahead with a 3-0 run, including a Santos kill and Stuart ace. Princeton cut the lead to one twice, at 12-11 and 13-12. In the end, putaways by Stuart and Stefan Krumerac sealed the victory. Stuart tallied two kills and two blocks in the final stanza.

Stat Leaders: Junior outside Collin Mahan (14), senior opposite Ricky Gevis (13) and junior outside Will Tischler (12) led the scoring for Loyola with double-digit kills, while each hitting nearly .300 or better. Junior middle Paul Narup added seven kills on a team-best .500 hitting effort to go with a match-high 10 blocks. Gevis served up two of the team’s five aces. Freshman setter Garrett Zolg recorded a 41-assist, 13 dig double-double.

It Was Over When: Loyola charged out to a 10-4 lead in Set 5, forcing a Quincy timeout. Three Hawk hitting miscues and two blocks and two kills by Gevis paced the Ramblers to the lead. Quincy rallied to within two at 13-11 as Winter notched two kills and Loyola committed three errors. The Ramblers called timeout and forced a service error out of the break. Mahan served up an ace to clinch the 15-11 win.

Key Stats: Lewis committed just eight errors en route to a .371 hitting effort, while also topping Lindenwood 5-1 in aces and 6-3 in blocks. The Flyers, which notched their seventh straight victory, hit better than .400 in Sets 1 and 3.

It Was Over When: Lewis ran out to a 16-5 lead in Set 3 and never looked back. Mitchem recorded three kills and two blocks, while the Lions chipped in five points on errors. Yoshimoto and Coenen also served up aces in the early run. Lindenwood would get no closer than 10 the rest of the way. A Coenen kill and Lion hitting error closed out the 25-13 win and the sweep.

Stat Leaders: Redshirt sophomore outside Raymond Barsemian and senior outside Jonathan Predney led the way for the Eagles with 16 and 15 kills respectively, although neither hit better than .200 for the match. Four other players turned in six or more putaways. Senior middle Taylor Falduti hit .500 with eight kills and a team-leading eight blocks. Predney added seven stuffs, while junior middle Hunter Howell and Barsemian put up six apiece. Redshirt junior setter Chandler Gibb notched a 52-assist, 16-dig double-double, while also chipping in six kills and four blocks.

It Was Over When: Concordia led Set 5 12-9 with help from kills by five different players. The set was far from over, however, as UC San Diego rallied with four straight points to grab a 13-12 edge. Two Syftestad kills and one from Zhu guided the Triton attack. The Eagles called timeout and scored three straight to complete the comeback victory. A UCSD miscue, a Falduti ace and a solo stuff by Howell capped the win.