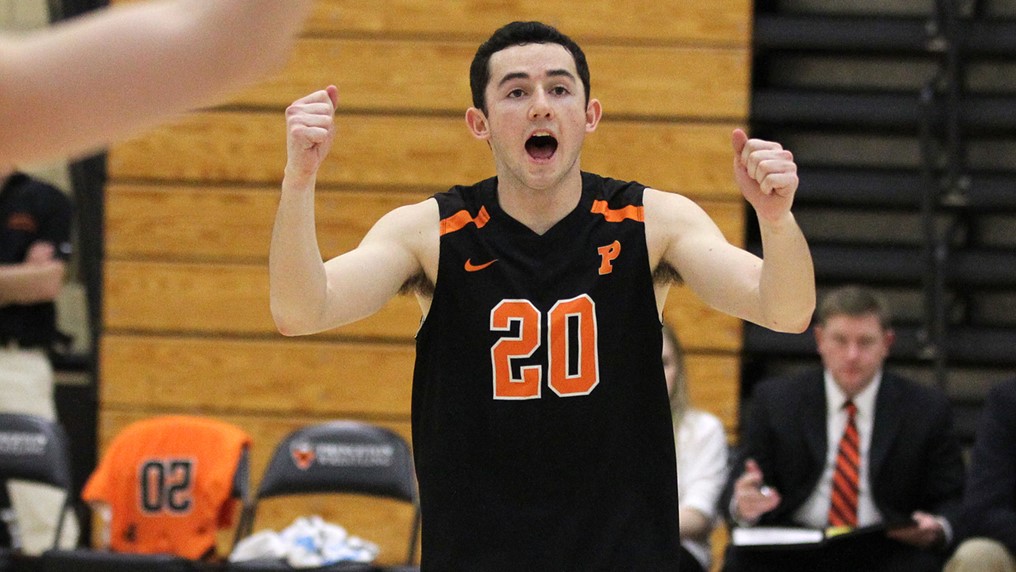 Princeton issued the upset of the night, picking up a home victory No. 18 Saint Francis in four sets with... Current Photo via Princeton Athletics

Princeton issued the upset of the night, picking up a home victory No. 18 Saint Francis in four sets with help from a strong blocking effort.

No. 11 Penn State and No. 15 George Mason earned road wins over NJIT and Sacred Heart respectively to move to 5-1 and 5-0 in EIVA action.

No. 17 Fort Wayne and Barton grabbed non-conference victories to pad their resumes to wrap up Friday’s early evening slate.

It Was Over When: Penn State used an 8-0 run to pull away in Set 3, turning a slim one-point edge to 13-4 blowout. Gear accounted for two blocks and a kill, while Albrecht served up an ace in the rally. NJIT would get no closer than seven the rest of the stanza. Five Highlander miscues and aces by Luke Braswell and Albrecht helped PSU to the 25-15 win.

It Was Over When: Set 4 was a one-point game midway through at 14-13 Princeton, when the Tigers pulled away. A kill and a block by Oboh, three kills by Luck and two by Huhmann helped Princeton to a 22-15 lead. The Red Flash did not go away, however, rallying to within four three times, last at 24-20 on a triple block by Cole Thompson, Carver and Buck. A putaway by Jess Hunt cut the SFU comeback short, closing out the match at 25-20.

It Was Over When: The Pioneers led it 4-2 in Set 4 after a block and two Patriot miscues. A 12-2 run turned the tides for George Mason as Wagner notched two blocks, a kill and an ace, and Gatling registered two blocks and a kill as the Patriots went up 14-6. Sacred Heart rallied to within four at 22-18 behind four Waumans kills and two by Chatterton. GMU called timeout and got a kill from Wagner and a Brian Negron ace out of the break to set up match point at 24-18. A stuff by Langston Payne and Wagner gave the Patriots the win.

Key Stats: The Mastodons dominated the net with 12 blocks, while also outhitting Alderson Broaddus .282 to .130 in a four-set non-conference win. The Battlers edged Fort Wayne 45-44 in kills, but trailed 12-4 in blocks and 2-1 in aces.

Stat Leaders: Sophomore outside Pelegrin Vargas and redshirt junior outside Colton Stone accounted for 32 of Fort Wayne’s 44 kills, turning in 17 and 15 respectively, while each serving up an ace. Stone hit at a team-best .565 clip and added seven digs, while Vargas hit .375. Freshman outside Austin Gerwig downed seven kills, while redshirt junior outside Tony Price put up eight blocks and freshman setter Frederico Santos added five stuffs.

Freshman outside Alex Sands and senior outside Francisco Cabrera split the load for Alderson Broaddus, each notching double-digit kill efforts with 14 and 13 respectively. Cabrera rounded out a double-double with 12 digs and the team’s lone ace, while freshman middle Chase Christiansen tallied eight kills on a .500 hitting effort. Senior middle Myles Miller added five kills and a team-high three blocks.

It Was Over When: After splitting the first 20 points of Set 4, Fort Wayne made its move, pushing out to a six-point edge at 20-14 with help from five Battler miscues and two Gerwig putaways. Anderson Broaddus scored four of the next five, including two Mastodon miscues and kills by Christiansen and Cabrera to pull within three at 21-18. Two Stone putdowns lifted the Mastodons to match point at 24-19. A Vargas kill ended the match.

Key Stats: Barton won every statistical category in a non-conference sweep of Queens, outhitting the Royals .242 to .051 with help from a 12-7 lead in blocks. The Bulldogs also held a 39-27 edge in kills and 6-2 advantage in aces. Barton was consistent in hitting over .200 all three sets, while Queens got worse throughout the match, starting with a .185 effort and ending with a -.067 clip.

Junior right side Marco Vecellio tallied 10 kills to lead Queens, while freshman middle Aleksandar Perisic chipped in six kill and seven blocks, while hitting at a .500 clip. Senior outside Jake Dube added five putaways, but hit .000 for the match.

It Was Over When: Queens boasted a 7-4 lead early in Set 3 as Barton committed three errors and Perisic added a kill and a block. The Bulldogs turned things around with a 9-2 run, including three Royals miscues and three blocks by Lord. Down 13-9, Queens called timeout and pulled within two at 14-12, but Barton scored six straight to make it 20-12. Vasilis Mandilaris added two blocks and Angelos tacked on a kill and a block to help the Bulldogs pull away. The margin stayed at five or more the rest of the way. A Lord putaway capped the night.