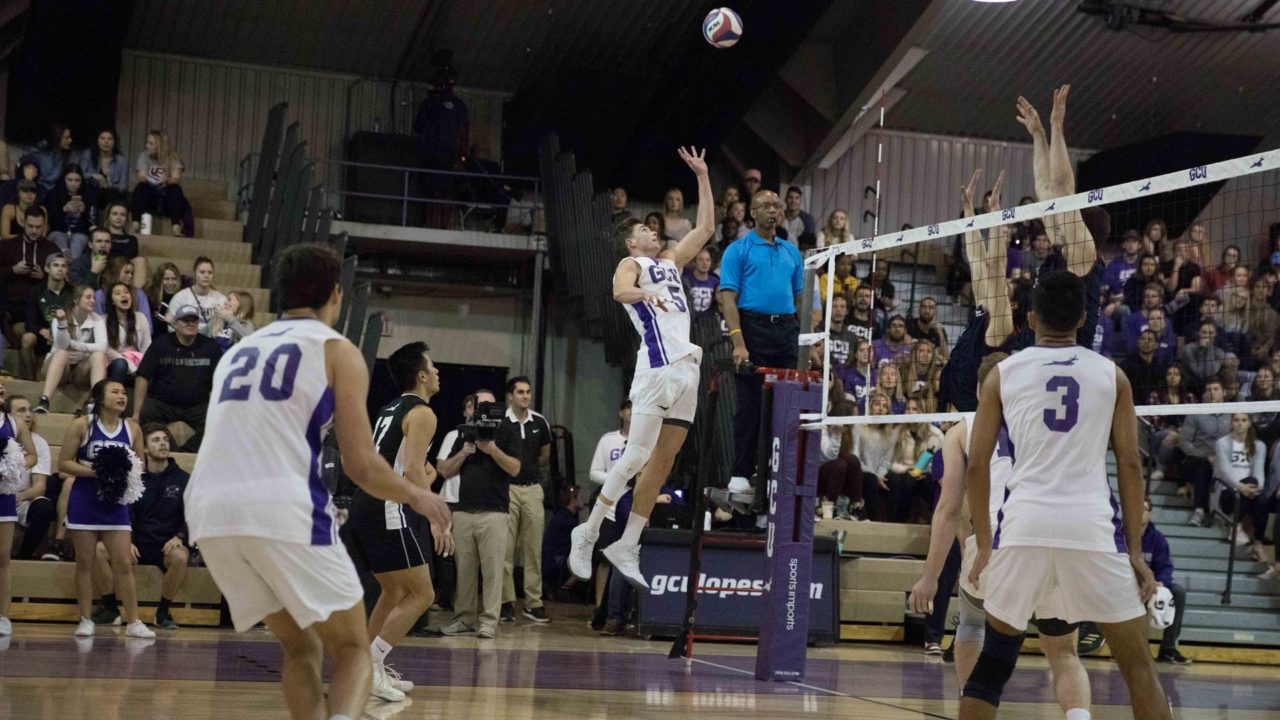 No. 13 Grand Canyon held on for a four-set home win over No. 15 Concordia Irvine with a strong block and efficient hitting to highlight Friday night action. Other winners were No. 8 Ohio State, No. 16 George Mason, No. 18 McKendree, Barton (RV) and Harvard. Current Photo via Grand Canyon Athletics

No. 13 Grand Canyon held on for a four-set home win over No. 15 Concordia Irvine with a strong block and efficient hitting to highlight Friday night action. Other winners were No. 8 Ohio State, No. 16 George Mason, No. 18 McKendree, Barton (RV) and Harvard.

It Was Over When: The teams split the first 20 points of Set 4, before Williams notched two kills to lift the Lopes to a 13-10 advantage. Concordia countered with a 5-1 run of its own, including a kill and an ace by Barsemian, to grab a 15-14 lead. Down 18-17, GCU scored four straight, including two Eagle hitting errors and a stuff by Blazer, Williams and Puna Kaniho. Two Blazer putaways and a Williams ace pushed the Lopes ahead 24-20. A Blazer kill clinched the match at 25-21 two points later.

It Was Over When: Ohio State raced out to a 9-4 lead in Set  3 with Szerszen accounting for two aces and a kill and Hervoir adding a kill and a block. Quincy rallied to tie it up at 14-all as the Buckeyes committed four errors and Winter notched three kills and an ace. The teams traded points over the next 12 serves leading to a knot-up at 20. OSU pulled away with two Hervoir putaways and a solo stuff by Laffin, which made it 24-21. A service error and hitting miscues kept the set going, before Szerszen closed out the night.

Senior outside Ryan Santos was the lone Golden Eagle in double digits with 13 kills on a team-high .611 hitting effort (13-2-18). Junior outside Brandon Greenway followed with nine kills, while freshman outside Max Senica chipped in four kills, two blocks and the team’s lone ace, but hit -.150.

It Was Over When: Down 4-3 early in Set 3, George Mason put together a 7-2 run as four players notched kills and Gatling and Negron teamed up for a block. Charleston cut the margin to two three times, last at 12-10, before the Patriots surged ahead by six at 19-13 with two kills by Malias and two Eagle miscues. Charleston scored five of the next eight with help from three GMU errors, but that only had the Eagles within four at 22-18. The Patriots wrapped up the match at 25-18 with a 3-0 run, including a kill and a block by Gatling.

Key Stats: McKendree evened the weekend score, rebounding from Thursday night’s loss to Princeton with a four-set victory. The Bearcats outserved the Tigers 7-3 and boasted a 56-42 lead in kills and .242 to .160 edge in hitting efficiency. Princeton boasted a 9-8 edge at the net. McKendree hit .265 or better in the first three sets, but hung on to win Set 4 despite hitting just .081. Princeton hit -.061 with eight errors to go with just six kills in the finale.

Sophomore middle George Huhmann put down a match-high 18 kills and added a team-best eight digs and four blocks for the Tigers, while hitting at a team-high .238 clip. Sophomore outside Greg Luck added 10 kills and eight digs and sophomore outside Parker Dixon followed with nine putaways. Senior middle Junior Oboh served up three aces and notched three blocks and five kills.

It Was Over When: McKendree jumped out to an 8-2 lead in Set 4 with help from two kills and an ace by Rueter and a solo stuff by Schmidt. Princeton slowed the Bearcats with back-to-back points, but couldn’t stop the 4-1 McKendree run that followed. Kills by Schmidt, Rueter and Wilcox gave the Bearcats the 12-5 edge. The teams traded points over the next 20 serves leading to a 22-15 score. McKendree earned its first set point try at 24-18, but Princeton thwarted six attempts to tie it up at 24. Two Oboh aces and three Bearcat miscues helped the Tigers extend the match. In the end, a service error and hitting error gave McKendree the win.

Four NGU players put down six or more kills, led by junior opposite Aaron Campbell‘s 10. Senior middle Matthew McManaway (8), sophomore outside Jackson Gilbert (6) and sophomore middle Ben Hamsho (6) followed. Hamsho hit at a team-high .385 clip and was one of five Crusaders with an ace and one of four with a block assist.

It Was Over When: After a tie at 4-all, Barton broke off a 6-1 run, including three NGU miscues and an ace by Leary. Trailing 10-5, the Crusaders narrowed the gap to two at 13-11 and eventually tied the score at 17. Four Bulldog errors, kills by four players and aces by Hamsho and Campbell aided the 12-7 rally. Two putdowns each by Brkovic and Angelos Mandilaris set the table for the final point by Barton at 24-22. Michael Perez issued the final blow.

Redshirt junior right side Emerson Waumans was tops for Sacred Heart with 14 kills, eight digs and five blocks. Freshman outside Jakob Karlsson (10), redshirt junior middle Taylor Bloomquist (7) and junior outside Blake Cox (7) rounded out the offense. Bloomquist hit .357 and put up five blocks, while Karlsson served up all three of the team’s aces.

It Was Over When: SHU took the early 4-2 lead in Set 4, but Harvard quickly tied things up at 4, 5 and 6 before surging ahead 12-8. Moore notched three kills and Ctvrlik added two in the 10-4 run. The Pioneers would get no closer than two the rest of the way. Up 14-11, the Crimson pulled away with an 8-4 rally, including a block and a kill by Gretsch. Sacred Heart did not go away though, scoring six of the next seven to slice the margin to two at 23-21. Two Karlsson aces and two Waumans kills aided the Pioneers. In the end, Gretsch supplied a kill and a block to wrap up the 25-21 win and the match.