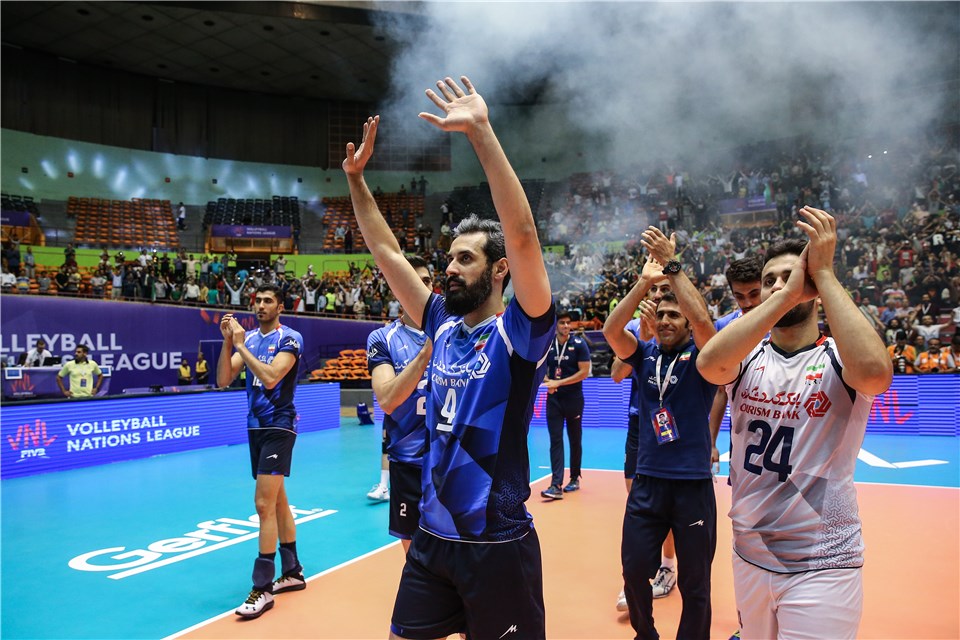 A 10-2 lead in blocks and help from 26 South Korean miscues lifted Germany to a sweep on Saturday. Meanwhile, Iran bested Bulgaria in every way in a four-set win for the home side.  Current Photo via FIVB

A 10-2 lead in blocks and help from 26 South Korean miscues lifted Germany to a sweep on Saturday to bring the team level at 7-7 in VNL play.

South Korea boasted a slight 38-37 lead in kills, but could not contend with the Germans at the net (10-2 in blocks) or at the service line (3-2 in ace). The Koreans also gave up 26 points on errors, while receiving 18.

Noah Baxpohler took advantage of his chance at playing time with 11 points (9 kills, 2 block), while four other players chimed in with six or more points. Simon Hirsch (10), Christian Fromm (9), Ruben Schott (9) and Tobias Krick (6) rounded out the group. Fromm downed nine kills, while Schott added seven putaways and two stuffs. Hirsch checked in with six kills and a team-leading four blocks. Krick tacked on five kills an one of the team’s three aces. Marcus Bohme sat out and Moritz Reichert played in just the third set as a substitute, recording a kill and an ace.

Kwang-In Jeon paced South Korea with 14 points on a match-high 13 kills and a block. Jae-Duck Seo followed with 10 points on nine kills and an ace, despite playing in just the first two sets. Jiseok Jung and Sung-Min Moon added five and four putaways respectively. Moon did not come on until Set 3, while Jung played in just the first two sets. South Korean utilized 12 players in the match.

Germany trailed midway through Set  but rallied thanks to Korean miscues and a strong serving run by Fromm. A net touch capped the 25-23 comeback win for the Germans.

Set 3 saw the Germans seize a 16-9 lead and never look back to close out the sweep.

“This was an interesting match and it was tougher than yesterday,” Germany coach Andrea Giani said. “We played with a different mood and we played flawlessly. We were so strong in side out today and that helped us to serve better as well. This is very important

“In the first part of the first set, we had difficulty gaining our rhythm but we later got better in defense and blocking. This victory is important for our ranking. I am happy that my younger squad focused and improved their performance tonight.”

Iran bested Bulgaria in every way in a four-set win for the home side.

Rozalin Penchev notched 16 points for Bulgaria, all on kills, and Nikolay Uchikov turned in 13 of his own, but it was not enough. Krasimir Georgiev added nine points on five kills, a team-best three blocks and an ace, while Svetoslav Gotsev tacked on six kills and two stuffs.

Iran raced out to a 10-3 lead in Set 1, but had to stave off a rallying Bulgarian side. A Faezi putaway finally capped the 25-22 win.

The Iranian issued a crushing 25-15 victory in Set 2. Bulgaria saved the first of what could have been up to 10 set point tries, but an Uchikov service error gave Iran the 2-0 lead in the match.

Bulgaria did not go quietly, however, coming through to steal away Set 3 after knotting the score at 22-all. A Valentin Bratoev service error put Iran up 23-22, but Penchev came through to close out the rally and the 25-23 Bulgarian victory.

Unwilling to play a decisive fifth set, Iran turned it on in Set 4, cruising to a 25-14 victory, sealed by a Kazemi ace.