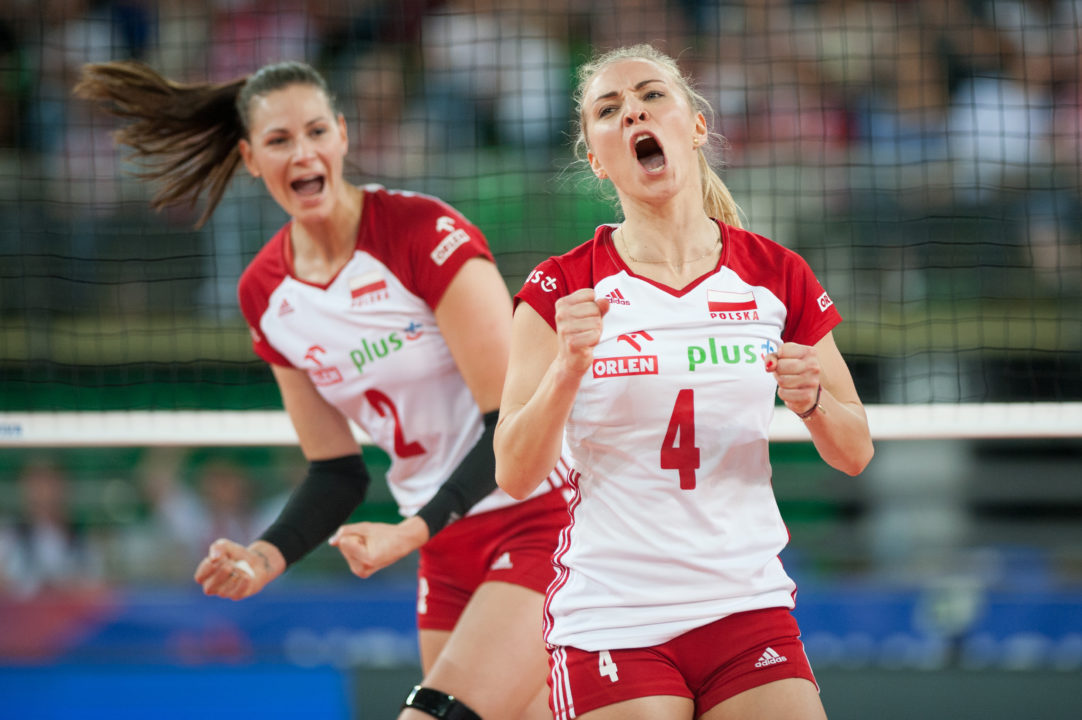 Nineteen-year old Hanna Orthmann took the spotlight after entering the match as a substitute in Set 1 of Germany's blanking of winless Argentina. Malwina Smarzek dropped a match-high 23 points as Poland edged Serbia in four sets.  Current Photo via FIVB

Nineteen-year old Hanna Orthmann took the spotlight after entering the match as a substitute in Set 1 of Germany’s blanking of winless Argentina.

Orthmann piled up a team-leading 12 points (9 kills, 2 aces, 1 block), while Louisa Lippmann added 10 points in the first two sets (8 kills, 1 block, 1 ace). Jana Franziska Poll also chipped in eight putaways, while Marie Scholzel and Denise Hanke aided the team from the service line. Scholzel served up two aces to go with her five kills, while Hanke recorded a team-best three perfect serves. Ten of the 13 players who saw court time in the match, scored for the Germans, including just one point from Maren Fromm, who registered one kill in five offensive swings in Set 1.

Sol Piccolo scored a team-best 10 points for the Argentines, with nine kills and an ace. Antonela Fortuna added six points with four putaways, a block and a kill. Seven other players scored as the team went 12 deep in its lineup. Agnes Tosi played in just the third set, registering three points, all on kills.

Scholzel set the tone in Set 1, notching four of Germany’s first eight points, including a pair of aces. Hanke served up six straight points to boost the German lead to 22-13 to put the set out of reach.

Germany scored six straight points in Set 2, including aces by Lippman and Kimberly Drewniok, as the team ran away with a 25-13 win.

Hanke served up two aces in Set 3 to give the team a good start, the Pia Kaestner took over with a few kills in a 25-16 win over the overmatched Dominicans.

Malwina Smarzek dropped a match-high 23 points as Poland edged Serbia in four sets to keep the victors mathematically eligible for the Final Six.

Smarzek downed 22 kills and added a block, scoring nine of her points in Set 4, to pace Poland. Agnieszka Kakolewska tacked on 13 points with seven kills and a team-best three blocks and three aces. Julia Twardowska played sparingly until Set 5, but came through with seven points, all on kills. Gabriela Polanska and Natalia Medrzyk rounded out the offense with four and five kills respectively. Polanska also added two blocks.

Belgium caught Poland off guard in Set 1 and kept things close until the final set.

After evening the match at a set apiece, Poland turned to Twardowska to spark the team to victory in Set 3. In addition to several putaways late in the stanza, she teamed up with Zuzanna Efimienko on a block to wrap up the 29-27 win.

Set 4 saw Smarzek soar with nine points, including four of the team’s first seven in the stanza. Four more Smarzek points gave Poland a 17-11 lead and three more putaways had the Poles on top by nine at 23-14. Twardowska and Kakolewska took over in the end with a kill apiece to cap the 25-14 victory and the match.