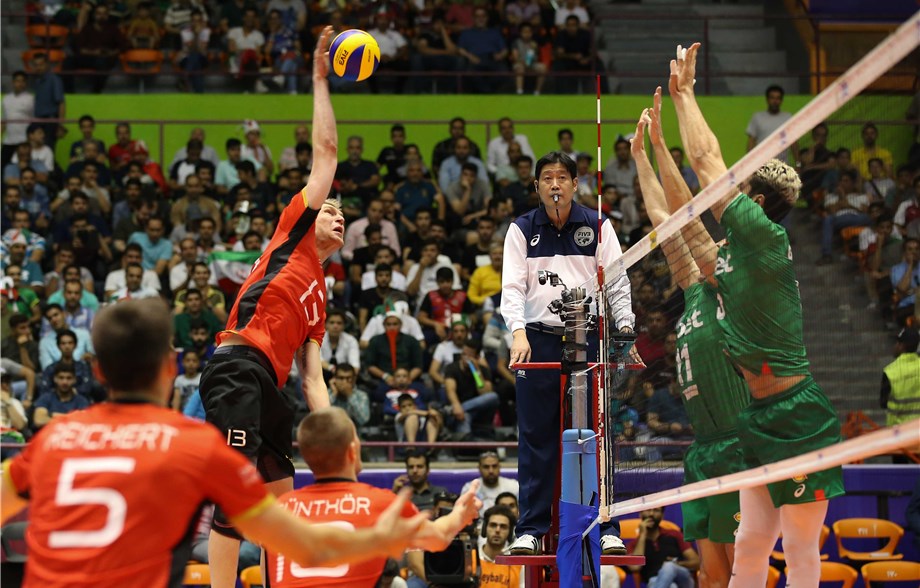 Both teams scored 109 points in the match, but it was Germany that rallied from down 2-1 in the match to steal away the five-set win over Bulgaria. Thirty-five errors were too much for South Korea to overcome in a four-set loss to Iran on Friday.  Current Photo via FIVB

Both teams scored 109 points in the match, but it was Germany that rallied from down 2-1 in the match to steal away the five-set win over Bulgaria.

The Germans boasted the advantage in kills (60-52), but trailed 4-2 in aces and gave up 46 points on errors (to 40 for Bulgaria). Both teams put up seven blocks.

With Tobias Krick and Christian Fromm resting on the bench, Moritz Reichert led a group of five starters with eight or more points in the match for Germany. Reichert scored 19 points, all on kills, while Simon Hirsch added 17, also all via putaway. Moritz Karlitzek (13), Marcus Bohme (12) and Jakob Gunthor (8) followed. Bohme turned in 10 kills and two blocks, while Karlitzek added nine putaways, two blocks and the team’s two aces. Gunthor put up a team-leading three blocks to go with his five kills.

Germany boasted a 16-12 advantage midway through Set 2 and held on for the 25-22 win despite the best efforts of Bratoev.

A back and forth affair was tied at 23-all in Set 3 before Bulgaria broke away for the 25-23 with kills by Yordanov and Batoev.

Hirsch and Karlitzek turned in on in Set 4 as Germany sent the match to a decider with a 25-23 victory, which was clinched as Uchikov served long.

Germany struggled from the service line early in Set 5, but their block and Karlitzek came through to give the team a 12-8 lead. The margin was too much to overcome for the Bulgarians, who had their two-match win streak snapped at 15-10.

Thirty-five errors were too much for South Korea to overcome in a four-set loss to Iran on Friday.

Milad Ebadipour racked up a match-high 17 points (16 kills, 1 block), while Morteza Sharifi and Saber Kazemi poured in 12 and 11 respectively for Iran. Sharifi downed 10 kills and added two blocks, while Kazemi starred at the service line with four of the team’s five aces, to go with six kills and a block. Masoud Gholami put up a team-best three blocks as part of his seven point tally in just over two sets.

Korea built a 12-8 lead in Set 1 and Na and Kazemi traded blows throughout the stanza, before Iran stole away the stanza on its third set-point try at 27-25.

The Koreans boasted a 5-2 lead to open Set 2 and made their way through a close set to knot the match with a 25-23 win.

Kazemi led the way for Iran early in Set 3, while Shafiei and Ebadipour starred late as the hosts edged to a 25-22 win and a 2-1 lead in the match.

Iran led 8-4 in Set 4, but Korea kept the pressure on throughout the final set, before a Taekeui Hwang service error ended the night.