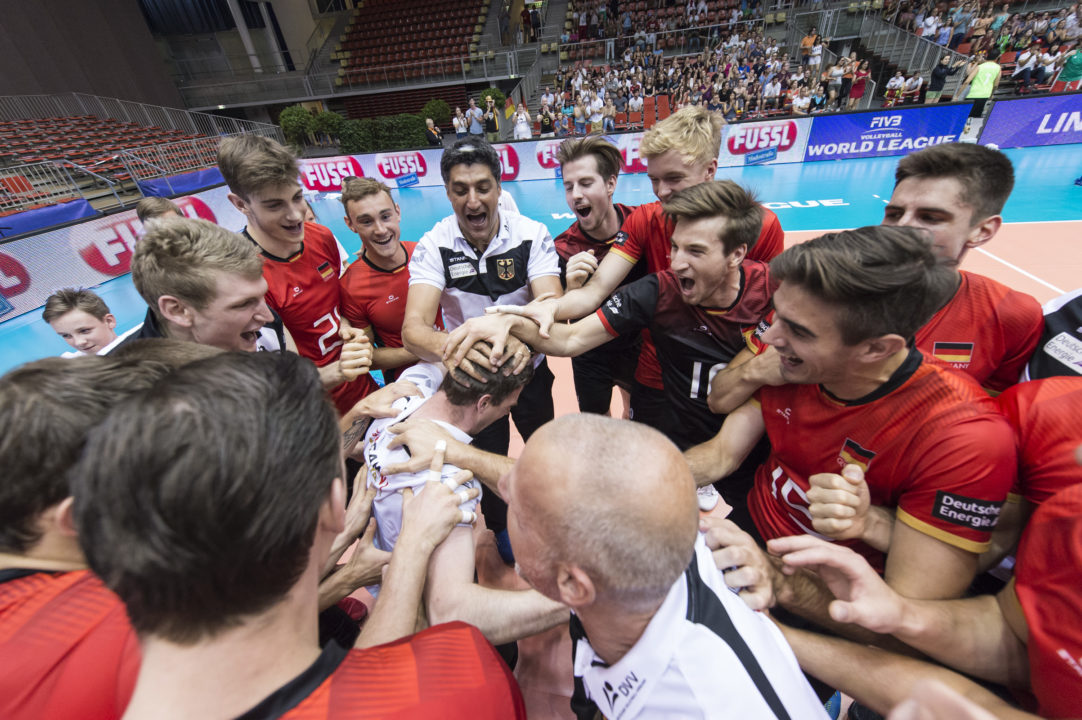 Germany earns a spot in the gold medal match of the European Championships for the first time in their history.  Current Photo via FIVB

For the first time in their history, Germany will be playing for gold at the European Championships. Despite losing the first two sets, the 10th ranked German squad was able to rally and win the final three sets against the 11th ranked Serbian team. Set scores were 24-26, 15-25, 25-18, 27-25, 15-13. Gyorgy Grozer lead the German side with  21 points on 20 kills and an ace while Denys Kaliberda chipped in 14 points on 11 kills and 3 blocks and 18 year old Tobias Krick scored 11 points on 8 kills and 3 blocks. Germany will face the winner of Russia and Belguim in the gold medal match.

Serbia jumped out to a quick lead behind the strong play of wing spikers Kovacevic and Nemanja Petric, opening up a 5 point lead midway through the set. But the Germans made a late rally, tying the score at 22. 18 year old Tobias Krick was a dominant force at the net and Grozer carried the same heavy load he has been all tournament long. However, the Serbians were able to pull out the first set behind a huge solo stuff block from Licinac.

Set two started with a strong kill off the block from Grozer. The set remained close until four straight hitting errors from the German side opened up a 10-5 lead for Serbia. The middle of the set became a battle of strong serving with each team making a four point run. Germany’s run came on the serve of Grozer and Serbia’s came from the right hand of Lisinac. A strong kill from Marko Podrascanin helped the Serbians reach the 20 point mark first and they never looked back, finishing the set on a double block from Kovacevic and Lisinac.

Set three started off in a similar fashion for Serbia as Lisinac started the scoring with a strong kill. An ace from Petric and a kill from Drazen Luburic gave Serbia their first three point lead of the set at 6-3. However, after the technical timeout, the Germans would rally. A kill from Grozer and a solo block from Christian Fromm gave Germany a 9-8 lead. A huge double block from Krick and Denys Kaliberda opened up a 12-10 lead for the Germans and forced Serbian head coach Nikola Grbic. It did not slow down Germany as Lukas Kampa instantly fired three straight aces. A wild swing out from Petric and a solo stuff from Kaliberda opened up a 17-10 lead for Germany. Aleksander Atanasijevic entered the game for Serbia and made an instant impact, delivering back to back kills to pull his team within four points. However, an attacking error from Kovacevic helped Germany open a 20-15 lead and they never looked back, finishing the set on a kill from Grozer.

Set four opened with points being traded on Serbian service errors, and kills from Podrascanin. A Kaliberda kill off the Serbian block opened a 5-2 lead for the German side, forcing Grbic into an early timeout. A Jovovic quick kill lead to three straight for Serbia to draw the score even at 5. A key moment in the set came on back to back kills on scramble plays from Petric. Although it only tied the score at 10, it was clear that momentum was back on the Serbian side. Atanasijevic was substituted into the game and again made an instant impact with back to back kills. A Lisinac quick kill gave Serbia a 20-19 lead and forced Germany into a timeout. However, the timeout worked as Lisinic missed a serve. The teams traded the next ten points, tying the score at 25. The German squad was finally able to take a lead and earn a set point after a double block barely clipped the end line. A double block by Grozer and Marcus Bohme ended the set and forced the match into a decided fifth set.

Kampa started set five with a service error, but a quick kill from Krick tied the score at 1. A huge kill from Grozer knotted up the score at 3, but he went back and served long, the third miss serve for Germany in the set. A huge solo block from Bohme gave the Germans their first lead of set five, but another missed serve tied the score at 5. Kovacevic and Grozer traded off kills and errors before a tip kill from Kaliberda gave Germany an 8-7 lead at the side switch. During the side switch, the trainer attended to Grozer who appeared to suffer a finger injury. As he did all match long, Lisinac had a response, crushing a kill to the floor to tie the set at 5, forcing a timeout from Germany. Out of the timeout, a huge serve from Lisinac lead directly to a kill off the block of Germany, a play confirmed by replay. After a Grozer swing out, the Germans were forced to call their final timeout, trailing 10-8. Simon Hirsch was subbed into the match for Germany and served back to back aces to give his team an 11-10 lead. A wild swing from Atanasijevic opened up a 13-11 lead, forcing Serbia to use their final time out. Bohme crushed a quick kill down the middle to bring Germany to match point. Kovacevic tooled the block to keep the match going, but a huge triple block from Kampa, Bohme and Kaliberda finished the match and the comeback for Germany.

Kovacevic lead the Serbians with 20 points while Lisinac and Petric chipped in with 11 and 10 points respectively. Serbia will play the loser of Russia and Belgium for bronze.