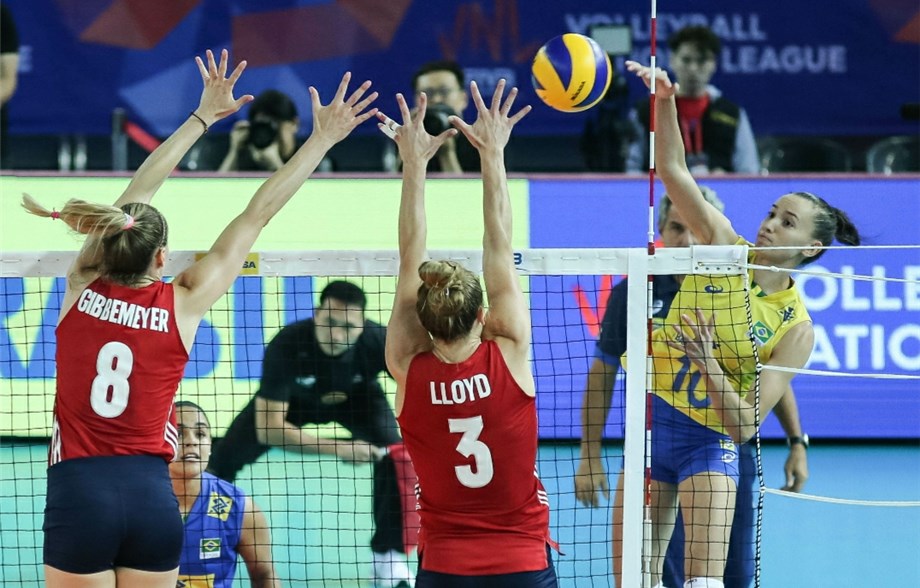 Lauren Gibbemeyer had a breakout game, posting a match-high 16 points, including eight of the USA's 14 blocks, as the Americans rolled on to its ninth straight win on Wednesday, besting Brazil 3-1.  Current Photo via FIVB

Lauren Gibbemeyer had a breakout game, posting a match-high 16 points, including eight of the USA’s 14 blocks, as the Americans rolled on to its ninth straight win on Wednesday.

The United States gave up 28 points on errors, but made up the difference with a 60-47 lead in kills and 14-11 edge in blocks. Brazil boasted a slight 4-3 advantage in aces and gifted the USA 23 points on miscues.

The Americans trailed by as many as five in the opening stanza (11-6) and were down 15-12 before putting together a 5-1 run to surge into the lead at 17-16 en route to a 25-23 win. Larson, Hill and Akinradewo shined offensively in the USA rally. Brazil tied it up at 29, but a Drews kill and Bartsch-Hackley ace gave the United States some breathing room at 23-21. As it turned out, they needed it as Brazil tied it up at 23, before a Akinradewo ace and Brazilian hitting error sealed the victory.

Team USA played from behind again late in Set 2, trailing 22-20 and facing two Brazilian set-point tries, before earning one of its own at 26-25. In the end, Brazil held on for the 28-26 win and snapped the United States’ 25-set win streak. Early on in the set, Brazil led 11-8, before the Americans rallied to take a 14-13 lead. The Brazilians went up 22-20, but a Gibbemeyer block and kills by Larson and Hill gave the USA a 23-22 edge. Brazil had the first set point try at 24-23, but a kill and a block by Akinradewo gave the USA a chance to save it set-winning streak at 26-25. Brazil closed out the set with three straight points.

The USA took an early 6-3 lead in Set 3, but boasted a 16-13 advantage midway through. Murphy, Hill, Akinradewo and Larson notched kills as the United States picked up steam down the stretch, tying it at 16 and 18 before charging ahead 21-19.  The Americans posted a final 4-0 run to clinch the 25-21 win with a Gibbemeyer putaway issuing the final point.

The USA turned a 5-3 deficit into an eight-point lead courtesy of an 11-3 run before capping the match with a 25-18 victory. Despite boasting a 5-3 lead, Brazil fell apart early on in Set 4 with three errors, which put the United States on top 8-5. The Americans carried the momentum to a 14-8 lead on a Murphy putaway. Gibbemeyer added a kill to make it a seven-point game at 16-9. In the end, the margin was too large for the Brazilians to overcome and a hitting error and service error gave the United States the win and the match.