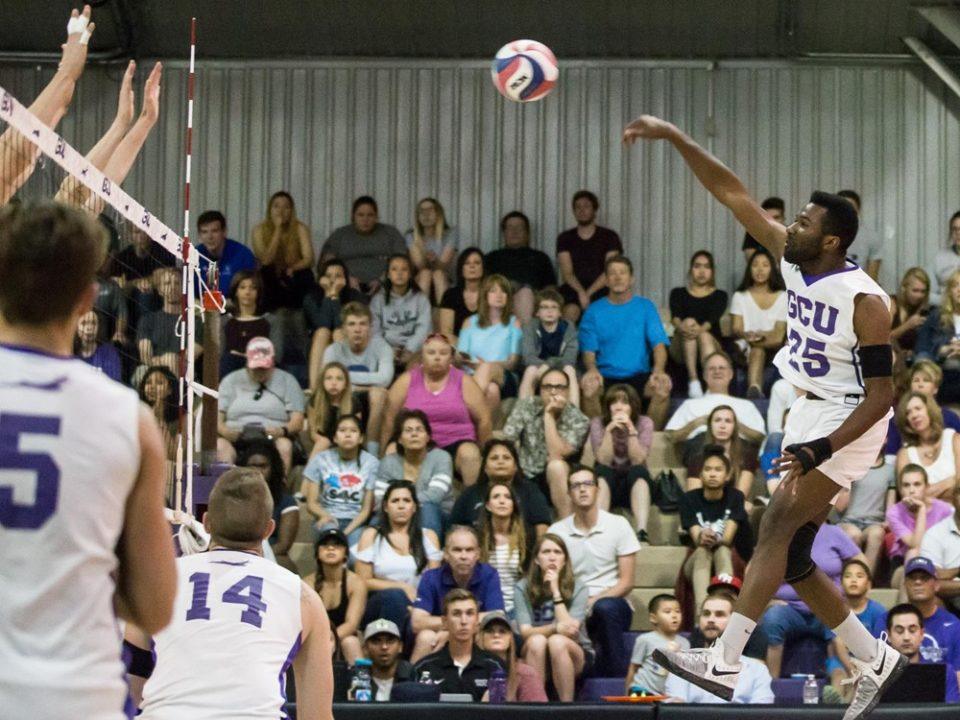 The set to decide a place in the MIVA Finals saw six lead changes and the teams deadlocked 11 times. A block and a kill by Saada lifted GCU to a 5-3 lead. Two hitting errors coupled with a block and kill by Perinar put Lewis up 8-7. The teams tied at 8, 9 and 10, before the Antelopes vaulted ahead 13-10 on an ace by Williams. Two Coenen putaways aided a 4-0 Flyer run, which put the home team up 14-13 and gave Lewis a match-point chance.  A Saada kill leveled the score and one each by Kinnebrew and Saada stole away the victory.

After splitting the first 20 points of the night, two kills and an ace by Weiskircher aided a rally that put GCU on top 19-15. Another Weiskircher putaway made it 23-21 Antelopes. A Saada kill and Kinnebrew ace knotted it at 23. Lewis scored four of the final six points, winning the set at 27-25 on its third set point chance via a kill by Perinar.

Grand Canyon boasted a 16-9 lead midway through Set 2. Two aces and two kills by Kinnebrew and three kills and a block by Silbernagel helped the Antelopes build the advantage. Lewis would get no closer than four the rest of the stanza.

After hitting .538 in Set 2, the errors piled up for GCU in Set 3 as they hit .091 in Set 3. Three hitting errors, two blocks and two service errors pushed Lewis ahead 14-8 in the stanza. GCU scored two of the next three points, but the Flyers built the advantage to nine at 21-12 on an ace by Coenen. Down 22-13, Grand Canyon battled back with a 5-1 run, including a kill and a block by King. Weiskircher and Perinar putaways, however, gave Lewis the 2-1 lead in the match.

A kill and two blocks by Williams helped GCU to a 10-6 start in Set 4. A trio of Perinar kills and two by Schmiegelt pulled Lewis within one three times, last at 16-15. Three straight kills by Williams and an ace by Kinnebrew put some distance between the teams at 20-15. Kinnebrew and Silbernagel sealed the set with the final two kills.

ROMEOVILLE, ILL. – Fifth time is the charm for the Grand Canyon men’s volleyball team. For the fifth consecutive season, the Lopes traveled to face the Lewis Flyers in the MIVA Playoffs. For the first time, GCU emerged with the win. With the victory, the Lopes will play in the MIVA Playoff finals for the first time in program history. GCU improves their record to 19-10 and Lewis ends their season with a 23-7 record. Both teams played with a bit of nerves at the beginning of the first set, as they combined for seven straight errors to open the contest. The teams kicked the nerves and play became reminiscent of how the series has been all season. With the score tied at 25, Lewis knocked down two straight kills to take the set by a 27-25 score.

GCU dominated the second set from start to finish. Matthew Kinnebrew opened Set 2 with two aces, and the Lopes later knocked down three straight kills to force Lewis into a timeout down 2-7. Grand Canyon extended its lead to 18-12 on a kill by Shalev Saada, and the outside hitter finished off the set with another two straight kills. The Lopes took the second set with a decisive 25-18 score.

In the third set, the Flyers earned a dominant win of their own. Saada began the set with a kill but GCU fell behind early and never regained the lead. Lewis recorded 12 kills in the set and earned a 25-18 win.

The momentum shifted again in Set 4, this time in favor of the Lopes. Cody Williams started things off with a kill and GCU continued to stretch their lead. The Lopes maintained a two-to-three point advantage before the attackers took over. Drake Silbernagel knocked down two huge kills during the stretch, including the final point, to finish the set 25-19.

In the decisive fifth set, Williams again opened things with a kill. Later in the set, Williams added an ace to put the Lopes up 13-10. Lewis then scored four straight points to earn the first match point of the night. Saada notched a huge kill to tie the match at 14, then Kinnebrew gave the Lopes match point with a kill of his own. On the final play of the game, Saada slammed a kill to give GCU the win.

GCU advances to the MIVA Finals and will face the top seed Ohio State on Saturday in Columbus, Ohio. Live stats and video will be available.