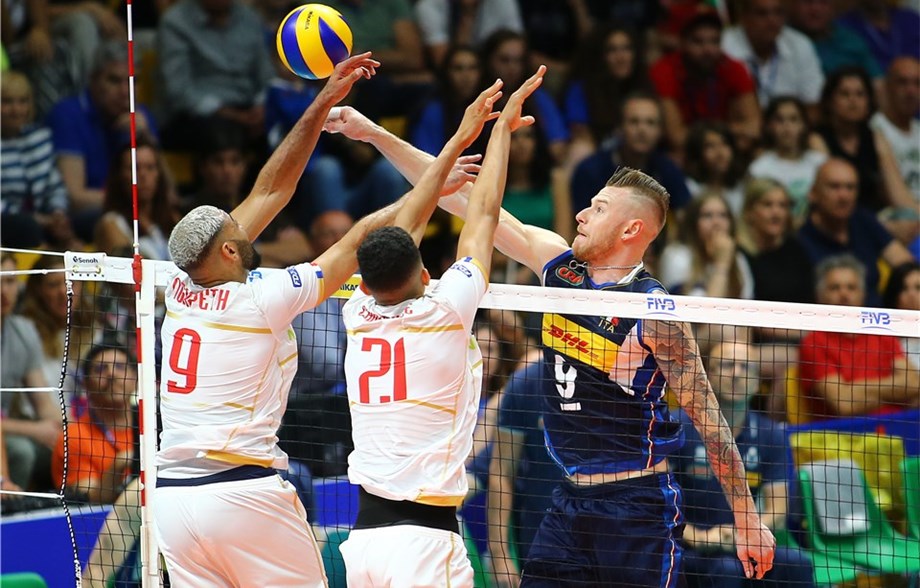 Italy put up 15 blocks and star Ivan Zaytsev chalked up a match-high 23 points to lift the team past first place France to keep its Final Six hopes alive on Saturday.  Current Photo via FIVB

Italy put up 15 blocks and star Ivan Zaytsev chalked up a match-high 23 points to lift the team past first place France to keep its Final Six hopes alive on Saturday.

Italy, now 9-5, will have to await Sunday’s result between Poland and Australia, to see if that is still the case ahead of its final match with the United States.

Zaytsev left no question on Saturday, turning in 16 kills, four blocks and three aces. Filippo Lanza led a group of four other players with seven or more points for the Italian side. Lanza posted nine points, all on kills, followed by Simone Anzani (8), Luigi Randazzo (7) and Daniele Mazzone (7). Anzani chipped in four kills and a team-best four blocks, while Mazzone also put up four stuffs and Randazzo added three.

Italy boasted a 15-5 lead in blocks and a 36-34 edge in kills. France had help from 32 Italian miscues, but gave up 28 points of its own on errors. Both teams served up three aces.

Italy built a 23-21 advantage in Set 1. Anzani gave the team a set-point try and Ngapeth missed the court on his next swing to give Italy the 25-21 win.

France went up 16-12 at the second technical timeout of Set 2, but a Zaytsev putaway capped a 5-0 run for Italy and knotted the score at 17. The crowd of more than 5,000 fueled the Italians to a 25-22 victory with the star of the show once again coming through with the game winner.

Italy led by as many as four in the early going of Set 3, but France kept pace and boasted a 19-16 lead later in the stanza. A challenge proved a Zaytsev foot fault and put the French just four points from the set. Zaytsev more than made up with the miscue, giving the Italians three match-point tries before Mazzone ended the upset with a block.

France will face Russia on Sunday with the top spot in the standings on the line. Italy will hope that its match with the United States still has meaning by its 2:30 p.m. ET first serve.