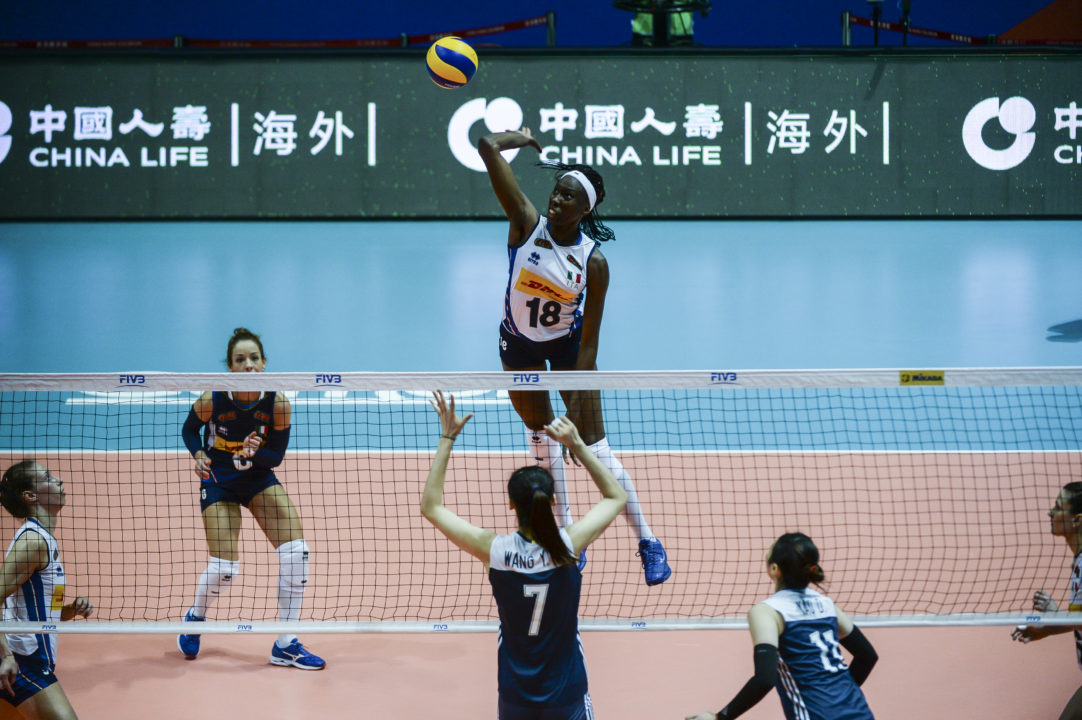 Japan was just too much for Argentina offensively, registering 15 more kills, in a sweep, which mathematically eliminated Argentina from Final 6 contention. Paola Egonu and Miryam Fatime Sylla paced Italy with double-digit scoring efforts as the Italians issued top-ranked China their first loss in Pool 12.  Current Photo via FIVB

Japan was just too much for Argentina offensively, registering 15 more kills, in a sweep, which mathematically eliminated Argentina from Final 6 contention.

The Japanese bested the Argentines 39-24 in kills and 4-2 in blocks in the victory which saw both teams tally five aces and commit 27 miscues.

Risa Shinnabe and Ai Kurogo posted 11 points apiece to lead Japan, while Yuki Ishii and Aika Akutagawa registered seven each. Kurogo downed a team-best nine kills, while Shinnabe followed with eight putaways and three aces. Ishii chipped in six kills and an ace, while Akutagawa tallied five kills and a team-leading two blocks. Sarina Koga saw her first action in Hong Kong, chipping in five points, all on kills, after entering the match as a substitute in Set 2.

Anahi Tosi once again led the Argentines, posting eight points, with six kills, a block and an ace. Agnes Tosi followed with seven points (5 kills, 2 aces) with Agostina Soria (6) and Antonela Fortuna (5) right behind. Twelve of the 14 Argentine players saw the court in the match, but just seven contributed to the team’s scoring.

Japan head coach Kumi Nakada: “ During the three matches in Hong Kong, we had a lot of gains as well as things to improve. We had two wins and a loss which was not perfect, but I am satisfied. Next week we will face some other strong opponents and we will certainly fight hard.”

Argentina head coach Guillermo Orduna: “Congratulations to team Japan. We improved in every match. This match serves as a valuable experience to prepare us for the upcoming FIVB Volleyball Women’s World Championship as we can raise our standard with more experiences. Thank you Hong Kong for your hospitality.”

Argentina captain Julieta Lazcano: “Our team encountered some problems in the match but we did a good job and played really well. The conditions of today’s match were tough as we do not have much experience of playing in front of such a large group of people as at this high level competition.”

Egonu notched 13 points with 12 kills and an ace, while Sylla pounded down 11 putaways to guide the team in the four-set win, Italy’s third straight over the Chinese dating to the 2017 World Grand Prix.

China, which already owns a spot in the Final 6 as the host team, will head home to Jiangmen to face No. 2 United States, No. 4 Brazil and No. 5 Russia, while Italy travels to the Netherlands to take on Serbia, the Dominican Republic and the host Dutch side.