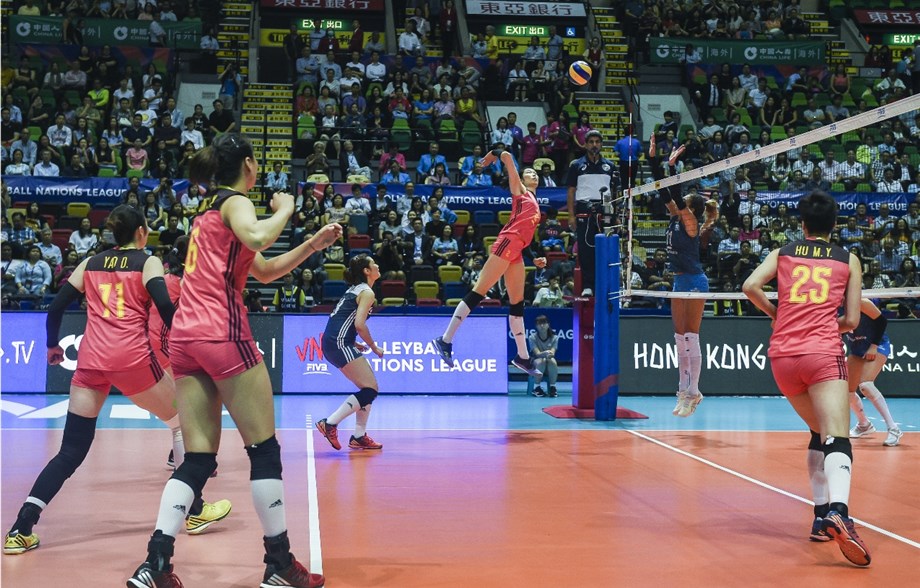 Italy outscored Japan 107 to 105 and bested its foe in kills, blocks and aces, but committed 53 errors in a five-set loss on Tuesday. Meanwhile, China dominated the net with 18 blocks in a sweep of Argentina to open Week 3 of VNL play.  Current Photo via FIVB

Italy outscored Japan 107 to 105 and bested its foe in kills, blocks and aces, but committed 53 errors in a five-set loss on Tuesday.

Paola Egona scored 25 in her VNL debut with 18 kills, five blocks and two aces, all team-highs, but it was not enough. Miryam Fatime Sylla tacked on 12 points (9 kills, 2 blocks, 1 ace) and Lucia Bosetti chipped in 10 points, all on kills.

Japan countered with 16 points from Ai Kurugo, all on kills, and 12 from Yuki Ishii (11 kills, 1 block). Kanami Tashiro served up two of the team’s three aces. Japan sat out Sarina Koga for the match with Wednesday’s match with top-ranked China looming.

Japan head coach Kumi Nakada: “We had some frustrating games last week at home and we made lots of corrections today. We managed to step up and improve. Our team showed lots of courage today. This made me really happy.”

Italy head coach Mazzanti Davide: “Congratulations to Japan. We gave away too much today leading us into a tough situation, especially having trouble in attacking. Although I am upset with today’s performance, I believe we just need some time to work together and improve the team.”

China dominated the net with 18 blocks in a sweep of Argentina to open Week 3 of VNL play.

Zhu Ting made her presence known in her VNL debut with 16 points, downing 11 kills and adding four blocks and an ace. Liu Xiaotong led a group of five other players with five or more points. Xiaotong notched nine points with eight kills and an ace. Wang Yuanyuan (7), Yan Ni (7), Gong Xiangyu (6) and Yang Fangxu (5) rounded out the group. Ni put up a team-best six blocks, while Yuanyuan served up a team-high two aces.

Anahi Tosi paced Argentina with 10 points (8 kills, 2 aces), while six other players got in on the offensive action with two or more kills. Florencia Reyes added six points with four kills, a block and an ace, while Julieta Lazcano tacked on five points, all on kills.

China head coach Lang Ping: “Today our team is still in the process of figuring out cooperation. Our understanding against Argentina was not very clear at first. Some passes were not accurate and we needed to adjust our rhythm. Our team’s reaction was a bit slow and some of our players lack experience. We hope our team’s cooperation will improve.”

China captain Zhu Ting: “During the first set, we were not cooperating well. But improvements can be seen in the second and third sets and we performed well just as in our trainings. There are still plenty of things to learn from this match. Argentina are a strong team and they played well too.”

Argentina head coach Guillermo Orduna: “We have a young team, today’s match was a challenge for us, though we opened the game quite well. But the mistakes made in the following sets led to our loss. We have found what we need to improve.”