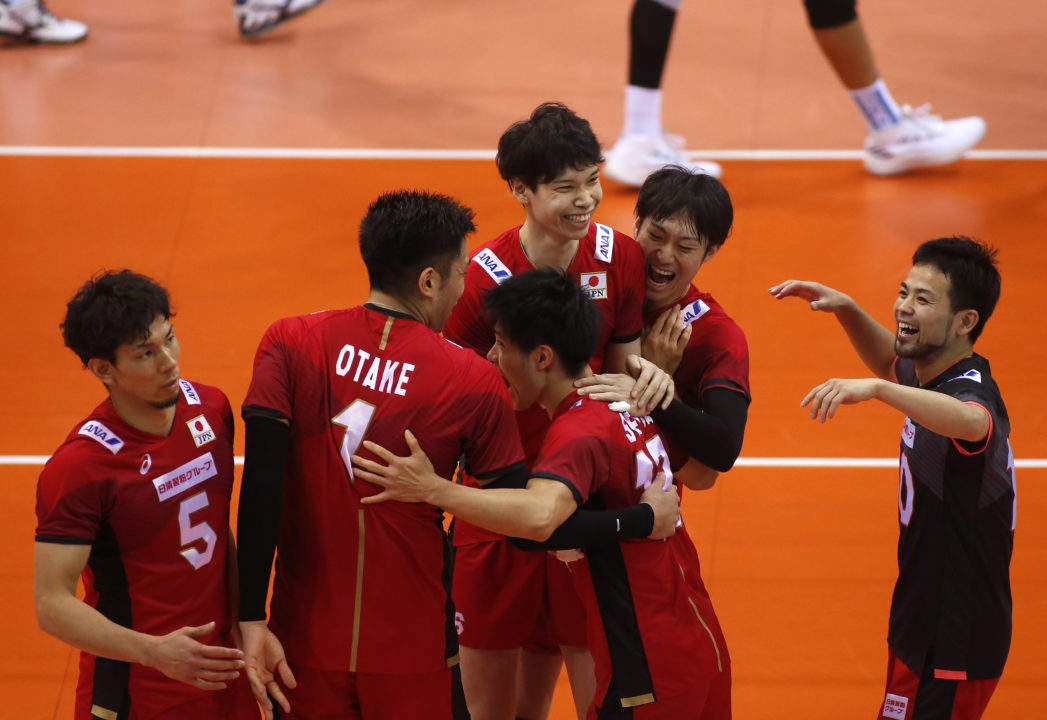 In a match that featured three deuce sets, 15 blocks were not enough to lift Argentina past Japan, which won its second five-set affair of the week. Romanas Shkulyavichus and Dmitriy Muserskiy scored in double digits to lead Russia past Germany in a sweep. Current Photo via FIVB

In a match that featured three deuce sets, 15 blocks were not enough to lift Argentina past Japan, which won its second five-set affair of the week.

Tatsuya Fukuzawa and Masahiro Yanagida paced Japan with 16 points apiece, while Issei Otake and Haku Ri added 12 each. Fukuzawa downed 16 kills, while Yanagida, Otake and Ri chipped in 15, 10 and 10. Otake served up a team-best two aces, while Yanagida and Ri accounted for the team’s two blocks.

The teams traded leads in Set 1, first an 11-9 edge for Argentina followed by a 20-18 advantage for Japan, but were eventually knotted at 20. A net violation followed by a Yanagida putaway sealed the 26-24 win for the Japanese.

Argentina battled back, cruising to a 25-12 win in Set 2. Argentina led by four early and boasted an eight point lead midway through at 15-7. The set included an interesting moment as the officials overruled the review that clearly showed a net touch, by stating the ball hit the floor before the violation occurred. It was of no effect, however, as the Argentines dominated the stanza.

The teams were fairly level in Set 3, playing to a tie at 11-all before Argentina crept ahead by two at 16-14 with a pair of blocks. The Argentines led 21-19, before Yanagida tied it up with two putaways. Ramos gave Argentina a set-point try and Otake gifted the team the win with a hitting attempt that sailed way long.

After that miscue, Otake exited the game and Hiroaki Asano took his spot. Japan excelled down the stretch in Set 4 as Yanagida starred and the team earned a 22-20 lead and went on to a 25-23 win to even the match.

It was a back and forth affair in Set 5 with Argentina going up 3-1 early, only to fall behind 8-6 at the changeover. Japan built a four-point lead and had a few match point tries, before clinching it at 15-12.

Romanas Shkulyavichus and Dmitriy Muserskiy scored in double digits to lead Russia past Germany to continue to build its resume for the Final Six and garner its fifth-straight win.

Seven German players scored in the match, but none reached double digits. Simon Hirsch was the closest with nine points (8 kills, 1 block), while Christian Fromm followed with eight points (7 kills, 1 ace). Tobias Krick (6) and Moritz Reichert (5) were not far behind. Lukas Kampa managed a team-best two blocks and two aces.

Russia quietly the home crowd by going up 22-17 in Set 1 and carrying the momentum from there.

In Set 2, the home side had a bit more to cheer for as the Germans boasted a slight edge throughout much of the stanza. The teams were tied up at 20 before Germany grabbed a 23-21 edge and earned a set-point try at 24-22. Krick served long and Muserskiy downed a kill to bring it level at 24. Volkov stole away the set for Russia in extra points at 26-24.

Russia carried the momentum out to an 8-5 lead in Set 3 and soon boasted a six-point margin at 13-7. Germany didn’t put up much of a fight from there, falling 25-18 on a Muserskiy putaway.