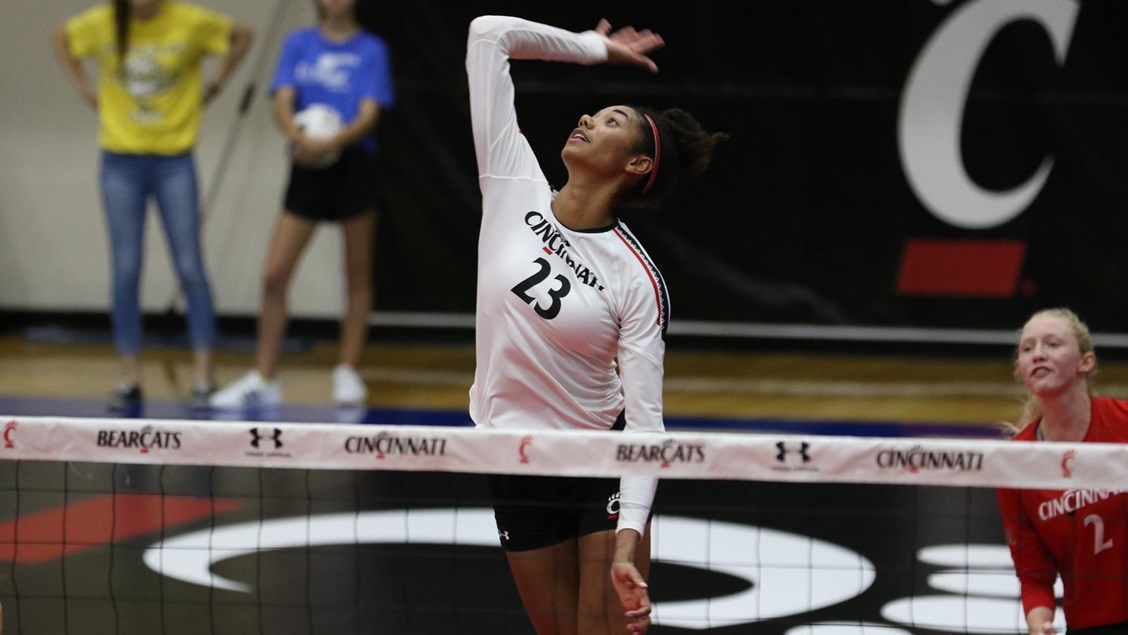 There were two monster performances that stood out above the rest, but an all around effort and two conference records gave Cincinnati's Jordan Thompson the edge and her third VolleyMob Player of the Week nod this season. Current Photo via Cincinnati Athletics

There were two monster performances that stood out above the rest, but an all around effort and two conference records gave Cincinnati’s Jordan Thompson the edge and her third VolleyMob Player of the Week nod this season.

Thompson averaged 8.33 kills and 2.67 digs per set, while hitting .587 and becoming the American Athletic Conference’s all-time season record holder for kills (660) and points (729.5). The redshirt junior outside hitter posted 24 kills and five digs while hitting .611 against Wichita State. She then downed 26 kills in a sweep of Tulsa, the most in a three-set match in league history, while hitting .564 and adding 11 digs and two blocks en route to her sixth American Athletic Conference Player of the Week nod.

The defensive standout performance of the week came from Bradley’s Yavianliz Rosado, who notched 8.86 digs per set, putting her in the top spot among our Week 11 Honorable Mention honorees.

Averaged 8.86 digs per set and made good on all 30 serve reception tries; notched 20 digs and four assists in a 3-0 loss against UNI; posted school match record 42 digs and added two assists and an ace in a four-set win against Drake, snapping a record which had stood since 2005; Missouri Valley Defensive Player of the Week

Averaged 6.71 digs per set and made good on 96.7 percent of her serve reception chances; posted 24 digs and five assists at UConn; notched 23 digs and seven assists at Temple; American Athletic Conference Defensive Player of the Week

Averaged 5.88 kills and 1.75 blocks per set, while hitting .471 against Minnesota and Michigan; notched a career-best 30 kills vs. Minnesota, hitting .560 and adding three digs and four blocks in a four-set loss, while snapping the program’s 25-point rally scoring record; posted 17 kills, 10 blocks and three digs, while hitting .343 in a four-set loss to Michigan; Big Ten Player of the Week

Averaged 2.38 blocks per set, while hitting .588 in wins over Colorado and Utah; posted school rally scoring record with 15 blocks vs. the Buffs, while downing eight kills and hitting .727 (8-0-11); added three kills and four blocks, while hitting .333 vs. the Utes; Pac-12 Defensive Player of the Week