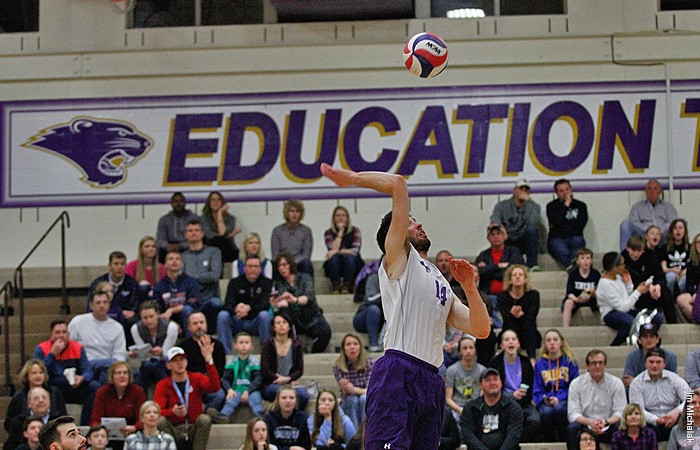 McKendree bested No. 18 Saint Francis at home behind a double-double by Nolan Rueter, while No. 4 Loyola swept No.... Current Photo via McKendree Athletics

McKendree bested No. 18 Saint Francis at home behind a double-double by Nolan Rueter, while No. 4 Loyola swept No. 6 Pepperdine and No. 8 Lewis moved past No. 15 Penn State in four sets in Honolulu. No. 13 Grand Canyon recorded its third straight sweep, topping Mount Olive to round out the early action on Saturday.

It Was Over When: Saint Francis jumped ahead 12-7 midway through Set 4 with help from three kills apiece from Buck and Braswell. McKendree countered with five straight points, including a Ross ace and a solo block by Dimke, to tie it up at 12. The Red Flash scored six of the next nine, including two stuffs by Koszelak and Kegerreis to go up 18-15. Three Wilcox putaways knotted the score at 21. Trailing 23-21, the Bearcats scored three straight, with a kill and block by Rueter to earn their first match-point try at 24-23. Another Rueter putaway gave McKendree another shot at 25-24. In the end, a Ross kill and Brendan Schmidt ace gave the Bearcats the come-from-behind 27-25 win and the match.

Key Stats: Loyola outhit Pepperdine .355 to .228 in a road sweep on Saturday to rebound from Thursday’s loss to Concordia-Irvine. The Ramblers also bested the Waves in kills (40-35) and aces (6-5), but Pepperdine won the blocks 5-4. Loyola hit at a match-high .423 clip in the final stanza.

Stat Leaders: Junior outside Collin Mahan and senior outside Ryan Jamison turned in 11 and 10 kills respectively to lead the Ramblers. Jamison rounded out a double-double with a match-high 11 digs and two aces. Senior middle Jeff Jendryk followed with eight kills on a perfect 1.000 hitting effort (8-0-8) and a team-best two blocks. Junior middle Paul Narup added six kills and two blocks with a .750 hitting effort, while senior opposite Ricky Gevis also notched two stuffs.

It Was Over When: Loyola broke open Set 3 with a 7-3 midset run, turning a 12-11 advantage into a 19-14 edge. Four different players tallied kills in the stretch, while Pepperdine chipped in two service errors. The Waves countered with four of the next five points, including a Wieczorek ace and kills by Harriman and Harthaller to narrow the gap to two at 20-18. Up 21-19, Loyola put together a final 4-1 run. Two Mahan putaways and one from Jendryk set up the final point, which came on a Pepperdine hitting error.

Key Stats: Lewis racked up 11 blocks and seven aces and hit at a .351 clip to overcome a 17-kill deficit in the match and grab its first victory in three tries in Honolulu. The Flyers bested the Nittany Lions 11-4 in stuffs, 7-6 in aces and .351 to .282 in efficiency. For its part, Penn State racked up 56 kills to 39 for Lewis. Twenty five miscues plagued PSU.

It Was Over When: In a fourth set that featured 12 ties, the match came down to the wire, with Lewis pulling it out with a final 4-0 run. The Flyers led by as many as three in the early stages, last at 13-10, with help from eight PSU miscues. The Nittany Lions leveled the score at 14 and even took a 17-16 lead as Albrecht downed two kills. Penn State owned a 22-21 advantage after kills from Mackiewicz and McLaren, but could not hold on. Two errors, a block by Murray and Jaconb Kerschner and a final putdown by Coenen gave the Flyers the 25-22 win and the match.

Key Stats: GCU posted 16 more kills and three more aces in the sweep to overcome deficits in hitting percentage and blocks. Mount Olive outhit the Lopes .318 to .288 and outblocked them 13 to 5.5. Grand Canyon made up the difference with a 51-35 lead in kills and 6-3 advantage in aces. The Lopes edged the Trojans 26-24 in Set 2 despite being outhit .433 to .333.

It Was Over When: GCU snapped a 6-all tie with a 9-4 run, including three Williams kills and two each by Mosher and Saada. Mount Olive charged back with six of the next nine, including an ace by Yasalonis and two blocks, narrowing the gap to two at 18-16. The teams split the next 10 points leading to a 23-21 score, before Williams and Saada closed the door with putaways for the final two points of the 25-21 win.