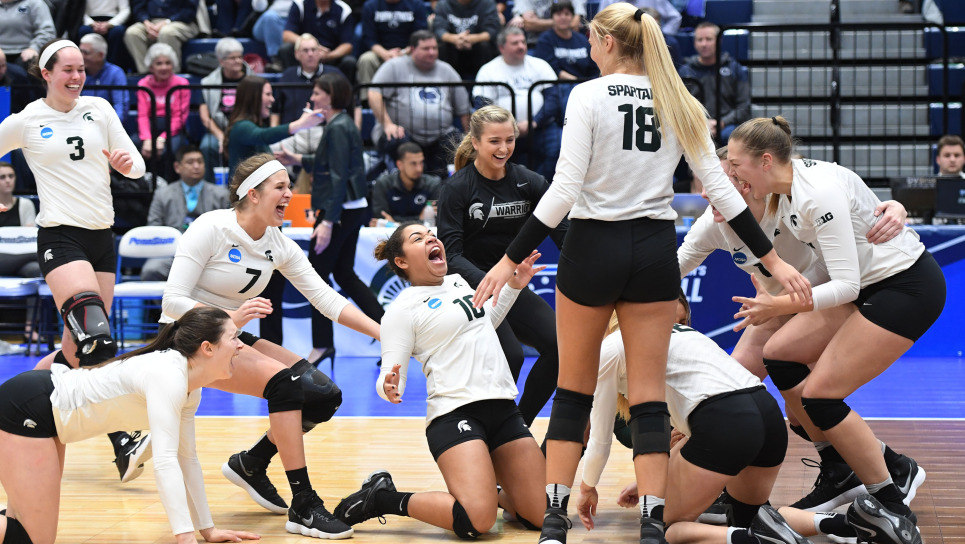 In a battle between un-seeded Big Ten Cinderellas, Michigan State knocked off Illinois on Friday, earning them the right to play yet another Big Ten opponent, Penn State, in the national quarterfinals on Saturday. The winner will advance to Kansas City to play in the NCAA Final 4.

“It was the battle I think we were expecting from Illinois,” Michigan State head coach Cathy George said after the match. “We knew that the match we played in the regular season wasnt indicitave of what they could accomplish. I was so very proud of our players for responding and never backing down. Advancing deep into the NCAA Tournament has been something that this group has had their eye on since last December – so its incredibly rewarding to see them continuing on with a chance at a Final Four.”

The Spartans’ offense improved in each of the 4 sets. They hit .222 in the opener, a tight win, and even as Illinois took a comfortable 2nd set win, Michigan State’s hitting jumped to .250. The Spartans then hit .263 in the 3rd and .282 in the clinching 4th to win the match and advance.

The defense that carried them to this point held strong, however. They kept Illinois to just .248 hitting in the match in spite of being out-blocked 12-8. An aggressive service game, including 9 aces, helped keep Illinois off balance, and aside from the 2nd set where they hit .419, the Illini couldn’t put balls to the floor. Michigan State’s Jamye Cox had 14 digs, while Rachel Minarick had 11.

The Spartans’ high-hitting outside duo of Autumn Bailey and Holly Toliver led the way in scoring. Bailey had 12 kills (6 errors, .194 hitting) to go along with 9 blocks and 5 aces, including the one that finished the game in the 4th set.

Just before Bailey’s game-winning ace, things got heated between the two teams, so much so that the officials had to step in and tell Bailey to “settle down a bit,” according to George. With the Spartans on match point, Bailey ripped a shot down the line, and out, but she felt that the ball was touched by an Illinois player. After an official review, the call on the court stood, meaning the set was tied up at 27. On the next point, she hit a kill off the Illinois block, and then went back and ripped an ace to end the game.

Meanwhile Toliver had 14 kills (6 errors, .250 hitting), coupled with 8 digs, 2 block assists, and an ace to help send the team to its first Regional Finals since 1996.

Illinois had one big set, and according to coach George, Michigan State’s struggles in its service game, and a surge in Illinois’ serves, made the difference in the 2nd.

“Well, we were making a lot of service errors, and we weren’t serving very well in game two, and they (Illinois) were. They were doing a nice job picking away at our passers. We weren’t staying in system. We weren’t getting our offense cooking like we needed to, and they are too good of a blocking team, as you well know, one of the top in the country. For us to not be able to do that makes it difficult and puts a lot of strain on our pin hitters. We needed to settle down, obviously, ebbs and flows. I think Illinois is a really good serving team, and I thought they did a nice job really working it and working our passers and not letting them get settled in anywhere. I thought that was a great effort, but then we got our service game back a little bit and started making runs at points. But, it was really the team that was going to make a couple runs here and there. That’s really what the difference was going to be.”

Illinois’ young team (their only senior is libero Brandi Donnelly) was led offensively by sophomore Jacqueline Quade (16 kills, 4 errors, .353 hitting) and freshman Megan Cooney (15 kills, 4 errors, .333 hitting). Those two combined for slightly more than half of the team’s attempts; the rest of the Illinois roster combined to hit just .166.

See how @MichStVB booked its first trip to the regional finals in 21 years. #NCAAVB pic.twitter.com/epxIbCaXb0