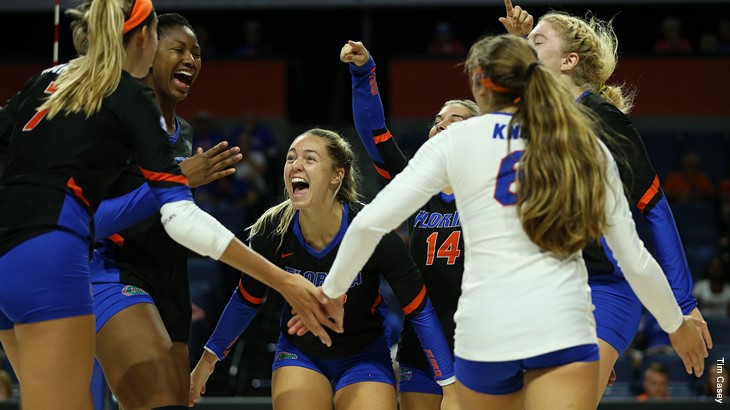 The Florida Gators play host to the Gainesville Regional Semifinals and Finals this weekend with one of four teams heading to the Final Four. Archive Photo via Florida Athletics

Just 16 teams remain in the NCAA Tournament with two weeks of the season left. Specifically in just the Gainesville Region, four teams are still alive. That all changes this week though, as one will emerge above the rest and clinch a Final Four bid as the regions’ winner.

Winning this regional should be a fight to the finish too, as it is the only one of the four that features all four ranked/seeded teams. That means we get plenty of big-name matchups, as the SEC and Big Ten each go head-to-head with a Pac-12 counterpart.

Below we have team profiles followed by predictions for both Regional Semifinals matches that lead into a prediction for the projected Regional Finals match.

How They Got Here: Florida (27-1, 17-1 SEC) earned an automatic berth after winning the tiebreaker with co-SEC champion Kentucky. In the opening rounds, they defeated Alabama State (3-0) and Miami (FL) (3-1).

Individual Stat Leaders: Carli Snyder paces the offense with 3.46 kills per set and is followed by Rachael Kramer (2.85), Rhamat Alhassan (2.69) and Shainah Joseph (2.53). In total five players have triple digit kills with four over 200, as Kramer has been the most efficient at .434 (also leads the SEC) with Alhassan at .399 and Joseph at .368.

Two setters pace the balanced attack for the Gators in a 6-2 system as Allie Monserez starts most often and leads the team at 7.60 assists per set. Cheyenne Huskey ranks second at 4.26 assists per set.

From a serving standpoint, Snyder has 49 aces, almost double anyone else on the team as her 0.50 aces per set rank atop the SEC. Paige Hammons is second with 27 and Monserez third at 20.

The Bruins utilize one setter in Loyola Marymount senior transfer Sarah Sponcil, who averages 11.25 assists per set. She was an outside hitter before her time with UCLA though and is plenty versatile with 3.35 digs per set and 0.54 blocks per set as well.

How They Got Here: Minnesota (28-5, 15-5 Big Ten) earned an at-large bid after finishing third in the Big Ten standings. In the opening rounds, they defeated North Dakota (3-0) and Northern Iowa (3-1).

Making things easier for that offense and more efficient is the spark-plug to it all in All-American setter Samantha Seliger-Swenson. She averages a Big Ten best 12.22 digs per set as the lone setter for the system.

Individual Stat Leaders: Four Trojans average over two kills per set, led by Khalia Lanier (4.19), Brittany Abercrombie (3.13) and Niki Withers (2.57). Abercrombie is also hitting .285, which is only trumped by Jordan Dunn (.374) for players who consistently play.