No. 8 Cal State Northridge Picks Up Road Sweep of No. 16 Stanford 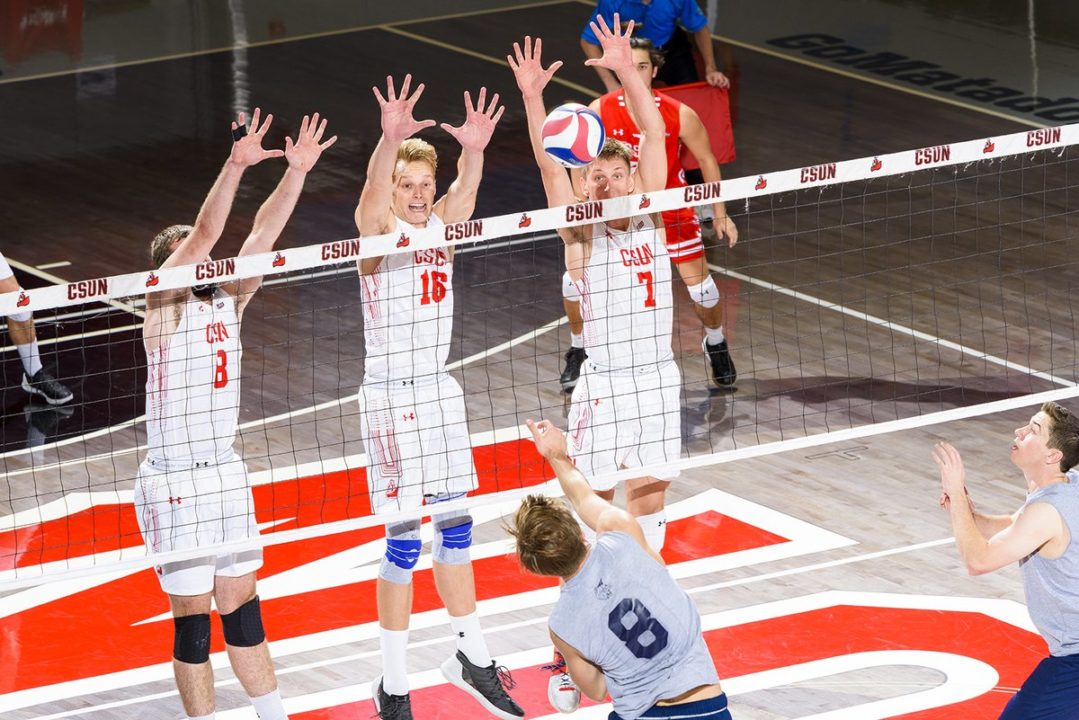 No. 8 Cal State Northridge is starting the season with a 5-0 mark for the third straight season, after extending its season-opening win streak to five matches with a road sweep of No. 16 Stanford on Wednesday.

The win, which marked the Matadors’ first sweep at Stanford since 2013, also marked the first victory for Emmett Enriques over his older brother Evan in five tries. In the battle of the liberos, Emmett managed four digs and an assist for CSUN, while Evan notched six digs and two assists for Stanford.

Of note for Stanford is that sophomore setter Paul Bischoff, who returned to the starting role after missing the team’s first three matches due to injury, did not play. Junior Russell Dervay guided the team, dishing out 31 assists. For CSUN, senior opposite Arvis Greene did not play in the match.

Northridge kicked off the match on a 5-1 run with kills by three different players. Down 10-5, Stanford narrowed the gap to three only to see CSUN score four in a row and surge ahead 16-9. Tomsia served up two aces and added a kill in the run. The Cardinal would get no closer than five the rest of the stanza.

After falling behind 3-0 in Set 2, Stanford rallied briefly to go up 4-3 and 5-4. Northridge scored four of the next five, including aces by Lucas Timm and Kalchev to go up 9-6. The Cardinal answered with a 5-0 run of its own, including a trio of Matador miscues, to take an 11-9 lead. Northridge tied it up at 14 and 15 en route to an 18-15 edge. Two kills and a block by Chance put CSUN on top. Stanford cut the margin to one at 21-20 and 22-21, but could not break through. A pair of service errors and a kill by Kalchev sealed the 25-22 Northridge victory. The Cardinal hit .471 in the set to Northridge’s .333 effort in the set.

Stanford led 10-6 early in the final set, but Northridge tied it up at 11, the first in a string of four ties, last at 15-all. Two Tomsia kills and a block by Byers helped the Matadors tie the score. Another kill and an ace by Tomsia pushed CSUN ahead by three at 21-18. Two putaways by Rakestraw and one by Henken pulled Stanford within one at 23-22. A solo stuff by Sam Porter put Northridge at match-point, but things were far from over. A service error and a block by Thoenen and Dervay knotted the score at 24. The Matadors finished the sweep with a block by Porter and Chance and Tomsia’s 12th kill.

Sophomore Ksawery Tomsia put down a team-high 12 kills to go with a season-high five aces to lead the seventh-ranked CSUN Matadors to a 25-17, 25-22, 26-24 sweep over the Stanford Cardinal Wednesday night at Burnham Pavilion.

CSUN improves to 5-0 for the third consecutive season and earns its first win and sweep at Stanford since the 2013 season.

Tomsia had his 12 kills on a team-high 25 swings to hit .240 but served tough throughout the match, ending up with a season-high five aces. Junior Dimitar Kalchev added six kills (.286) and a pair of aces while Josiah Byers and Eric Chance each chipped in three kills.

Junior setter Sam Porter posted 19 assists and matched Kalchev with two aces as the Matadors served a season-high 11 aces as team. Despite winning in three sets, the Matadors were out-high by the Cardinal .200 to .194 but out-blocked Stanford 10.0 to 4.0.

“It was a great win especially since we played without Arvis (Greene),” said CSUN head coach Jeff Campbell. “Ksawery played really well for most of the match but it’s really a testament to how tough and gritty our team is playing right now. Anytime you can beat a Pac-12 school on the road is a great win.”

With Tomsia serving, CSUN jumped out to a 5-1 lead in the opening set and never looked back. After Stanford trimmed the Matador lead to 12-9, Tomsia served a pair of aces in the middle of a 4-0 run CSUN run that pushed the lead to 16-9. The Matadors’ largest lead of the set was the final margin 25-17.

After struggling offensively in set one, both teams cracked up the hitting in the second set. CSUN hit .333 compared to Stanford’s .471 but the Matadors had enough to pull out the 25-22 decision. The set was tied at 15 when Chance and Kalchev put up a co-block followed by a Chance kill of a Cardinal overpass. Kalchev’s ace made it 20-16 CSUN before the hosts rallied back to within 22-21.

A Stanford service error and a Kalchev kill set set the Matadors up with set point at 24-21 before Stanford saved one set point before a Cardinal serve sailed long.

A Kevin Rakestraw ace gave Stanford an early 10-5 lead to open the final set. Following a CSUN timeout, the Matadors outscored the Cardinal 6-1 over the next seven points to knot the score at 11. The lead see-sawed back and forth until a pair of Stanford hitting errors put CSUN in front 17-15.

The Matadors maintained the lead and went up by two at 24-22 when Porter put up a solo block. Then, after Stanford saved a pair of match points to even the set at 24, Porter and Chance teamed up for another block and Tomsia’s attack could not be returned by the Cardinal on match point.

CSUN returns home to host Concordia-Irvine on Friday with first serve at The Matadome scheduled for 7 p.m.