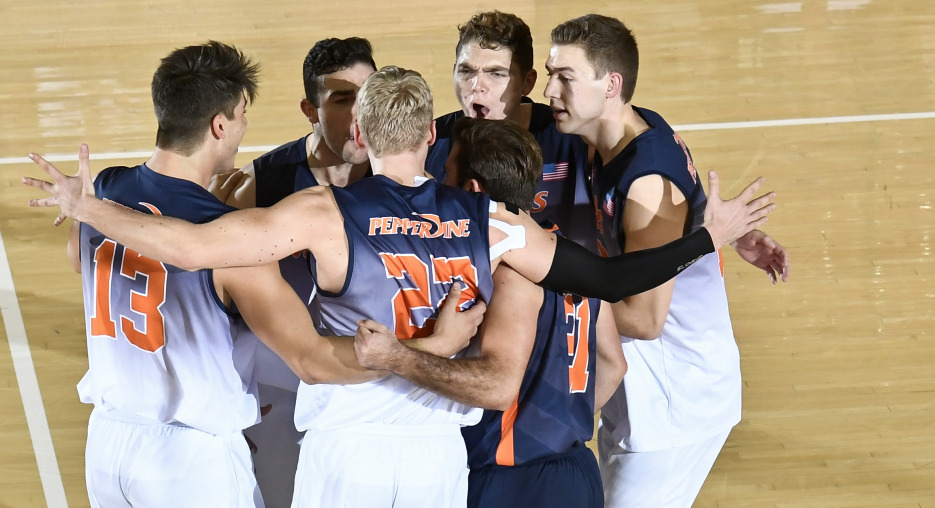 No. 8 Pepperdine used a strong service game and big block to issue No. 3 Hawaii its third straight loss.... Current

Junior outside Stijn van Tilburg did his part for the Rainbow Warriors, dropping 20 kills on a team-high .421 hitting effort, while junior outside Brett Rosenmeier added 14 putaways. Sophomore opposite Rado Parapunov (7), junior middle Dalton Solbrig (6) and redshirt sophomore middle Patrick Gasman (6) followed. Solbrig put up a team-best five blocks, while Gasman hit at a .417 clip and Parapunov served up the team’s lone ace. Sophomore outside Austin Matautia did not play in the match.

It Was Over When: Hawaii took an early 8-4 lead in Set 4 as Parapunov notched two kills and a block. From there Pepperdine took over, putting the match out of reach with a 17-6 run, going ahead 21-14. Chamberlain, Harriman, Robert Mullahey and Kaleb Denmark served up aces, while four players posted kills, including three by Wieczorek. Chamberlain and Harriman also teamed up for a pair of blocks in the stretch. Hawaii made a comeback with five of the next seven points, including four van Tilburg putaways, but it was too little, too late. Kills by Wieczorek and Harriman wrapped up the match at 25-20.

Key Stats: Penn State ended its five-match losing streak with a .370 hitting effort in a sweep of Saint Francis. The Nittany Lions hit .350 or better in all three sets, including a .400 effort in Set 3. PSU also won the blocks 6-3 and boasted a 44-37 edge in kills. The Red Flash outdid Penn State at the service line with a 5-2 edge in aces.

It Was Over When: Down 7-6, Penn State scored five straight, including two Mende putaways to go up 11-7 and take a lead it would not relinquish. Saint Francis sliced the margin to one twice, at 13-12 and 15-14, but the Nittany Lions broke away for good with a 6-1 run, featuring two kills each by Gear and Albrecht, which made it 21-15 PSU. A hitting error gave Penn State its first match-point try at 24-17. A block and a kill by Braswell kept the Red Flash in the game, but Mende issued the final blow at 25-19.

Key Stats: NJIT wrapped up a weekend sweep of Charleston with a .361 hitting effort and a 54-36 lead in kills in a 3-0 win on Sunday. The Highlanders hit .278 or better in all three sets, including a .457 effort in Set 2, while also boasting a 3-2 edge in aces. Both teams notched six blocks.

Stat Leaders: Sophomore opposite Piotr Namiotko downed 18 kills and hit at a .468 clip to lead NJIT. Freshman opposite Alvaro Gimeno chipped in 15 putaways and an ace, while senior middle Kevin Myren (8) and sophomore middle Luca Berger (7) rounded out the offense. Myren turned in a .583 hitting effort  and two blocks, while Berger added a team-high four blocks and two aces.

Senior outside Rajahl Moxey posted double-digit kills for Charleston with 12 putdowns, six digs and two blocks. Freshman outside Max Senica added seven kills and seven digs, while senior outside Ryan Santos turned in six kills and a team-best three stuffs. Senior setter Anthony Rivera notched five kills at a team-high .714 clip (5-0-7), while also registering 25 assists and a team-high eight digs. Junior middle Eugene Stuart posted four kills, hit .500 and served up both of the team’s aces. Junior outside Brandon Greenway and sophomore middle Adriel Roberts only played in two sets for Charleston, with Greenway notching a kill and a block, but hitting .000, while Roberts posted one kill, hitting -.143.

It Was Over When: Trailing 8-7 in Set 3, Charleston scored five of the next six, with two kills and two blocks by Santos to go up 12-9. NJIT worked its way back into ties at 13 and 14 before grabbing the lead at 15-14 thanks to three Highlander miscues. The Eagles used a 5-2 run, including two kills and a block by Rivera, to pull ahead 19-17. Down 21-19, NJIT turned things around and scored six of the final eight to close out the sweep. Four different players posted kills in the final run, including the game winner by Raymond Kowalski, and Gimeno served up an ace in the stretch.