Poland Hangs On in 5-Setter vs. Italy; Bulgaria Sweeps Japan 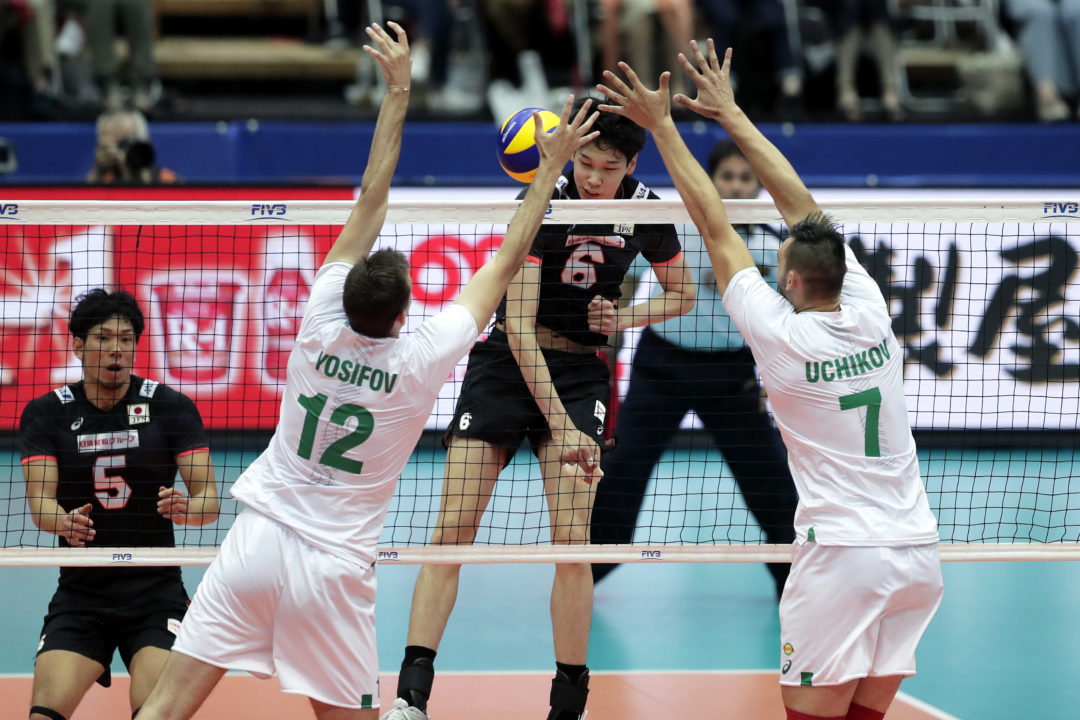 Poland piled up 15 blocks and had help from 33 Italian errors in a five-set win Friday to stay atop the men's Volleyball Nations League standings. Bulgaria snapped a three-match losing streak with a sweep of Japan, despite missing starting setter Georgi Brateov and Todor Skrimov. Current Photo via FIVB

Poland piled up 15 blocks and had help from 33 Italian errors in a five-set win Friday to stay atop the men’s Volleyball Nations League standings. With the loss, Italy dropped its second straight match, following a sweep at the hands of Argentina last week.

Gabriele Nelli notched a match-high 25 points for Italy, with 21 kills, three aces and a block and had help from two other double-digit scorers, but it was not enough. Filippo Lanza chipped in 15 points (14 kills, 1 block) and Simone Parodi tacked on 12 points (11 kills, 1 ace) after playing as a substitute the first two sets. Simone Giannelli put up a team-best three blocks.

Italy captain Filippo Lanza: “It was a good match and both teams played a competitive game. The Polish team played really well, on the other hand, we were behind most of the time. There were many unforced errors on our side. We will try to be well prepared for the next game.”

Italy coach Gianlorenzo Blengini: “I’m not satisfied with this result. The Polish team put us in a difficult situation. We had a hard time at the end of every set, but our players never gave up till the end. We had a good reception in the beginning of the game and we started playing well in attacking and defense as the game went on. We have two more weeks to go. We will try a new combination this weekend, with eight old team members and six new members. This was the first opportunity to play with these players, and I think that we have made one step forward.”

Poland coach Vital Heynen: “All I want to say was said by the Italian head coach. Two teams are fighting hard with different players every week and this was just today’s result. I’m satisfied with this result. One problem is that our team is tired after playing five sets, to get ready for the next shot against Japan tomorrow.”

Bulgaria snapped a three-match losing streak with a sweep of Japan, despite missing starting setter Georgi Brateov and Todor Skrimov. Neither player’s replacement on the roster saw action on Friday, but the team performed valiantly without them, outdoing Japan in every way.

Yuji Nishida and Akihiro Yamauchi led Japan with 11 and 10 points respectively. Nishida downed 10 kills and added an ace, despite playing as a substitute in Set 2. Yamauchi gave the team an all-around effort with six kills, to go with a team-best two blocks and two aces. No other player scored more than five points.

Japan led early in the last two sets before being overpowered by the Bulgarians, leaving the home crowd stunned.