Poland Names Their Roster for the World Championships 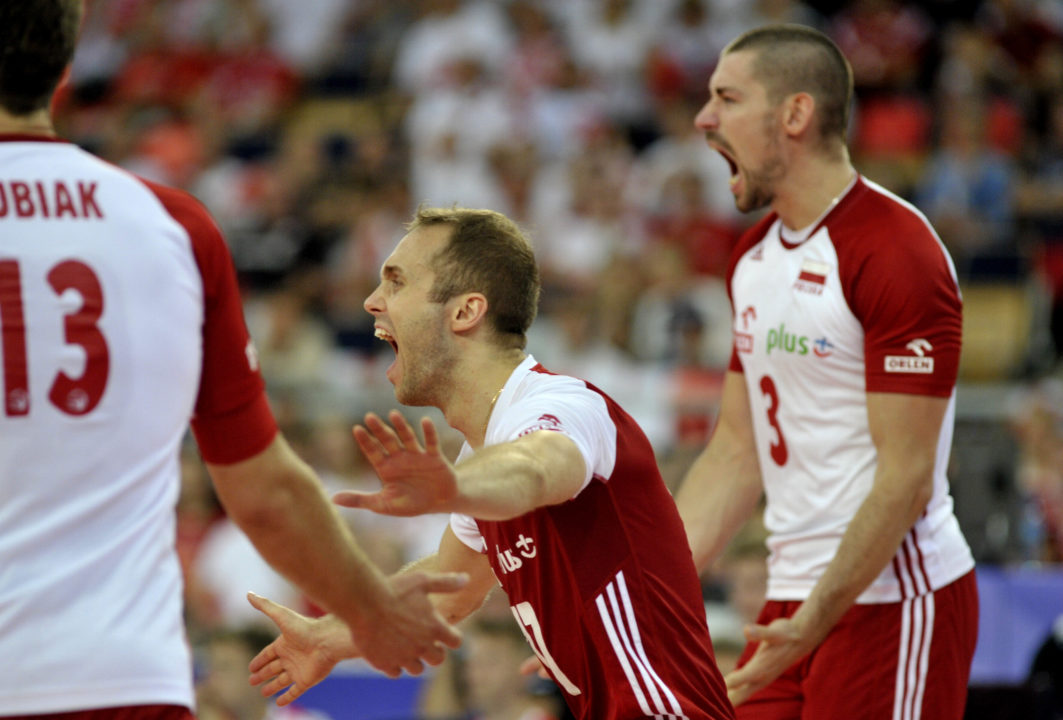 Poland's coach, Vital Heynen, has named his roster for the FIVB World Championships. Pawel Zatorski and Dawid Konarski are trying to get back on top of the podium in Italy this October.  Current Photo via FIVB

Just one day after being eliminated by the United States from the 2018 Volleyball Nations League, Vital Heynen, has announced his roster for the FIVB World Championships. Heynen explained that he is going to train with 15 players, one of them being a reserve player. Of the 15 players on the roster, all but 2 represented Poland at some point in the Volleyball Nations League.

Heynen stated in an interview with Polstat that it will be taking Tomasz Fornal as an extra player just for training purposes. Heynen explained that he did not want a player who was vying for a position on the team to be that reserve player because it can disrupt the morale of the team, but a younger player with potential to contribute in the future.  Fornal is a 20 year-old outside hitter who plays in the Polish PlusLiga for Cerrad Czarni Radom.

The other player chosen by Heynen who did not play in the Volleyball Nations League was Damian Wojtaszek, a 29 year-old libero from ONICO Warsaw. He will be expected to back up Pawel Zatorski.

Mateusz Mika, who just had an appendectomy, will miss the World Championships. The outside hitter who just singed with Asseco Resovia was a key contributor for Poland when they won the 2014 title. Though they lost an outside hitter to injury, they gained another. Michal Kubiak, who missed much of the Volleyball Nations League as he tried to recover from chronic conjunctivitis, is back on the roster.

Dawid Konarski is back with the team after getting a rest the last few weeks. He will join Bartosz Kurek and Damian Schulz at the opposite position. Heynen said in the television interview mentioned earlier that Poland has a great deal of talent at the opposite position, and this has not always been the case. With that in mind, he decided to keep three opposite player on the roster.

The setters will be both setters who played with Poland at the Final Six. Grzegorz Łomacz  of PGE Skra Bełchatów, who started for Poland throughout much of the Volleyball Nations League is included on the team. Fabian Drzyzga, Poland’s setter when they won the World Championships in 2014, is the other setter included by Heynen.

Piotr Nowakowski is back for Poland after missing much of the latter part of the Volleyball Nations League. The world champion from 2014 will join Mateusz Bienek and Jakub Kochanowski in the middle. They are only taking three middle blockers since they have three opposites.

With Mika missing due to his recent surgery, there are five players on this team who represented Poland in the 2014 edition of the tournament. Nowakowski, Zatorski, and Drzyzga were starters for the team that won the gold medal. Kubiak and Konarski were used as reserves off of the bench.

There are a number of players who played for Poland in the Volleyball Nations League who did not make the cut for the World Championships. Bartosz Bednorz, Bartłomiej Lemański, Maciej Muzaj, Łukasz Kaczmarek and Michał Żurek will miss the tournament in September and October.