Poland Outlasts USA to Set Up WCH Finals Rematch From 2014 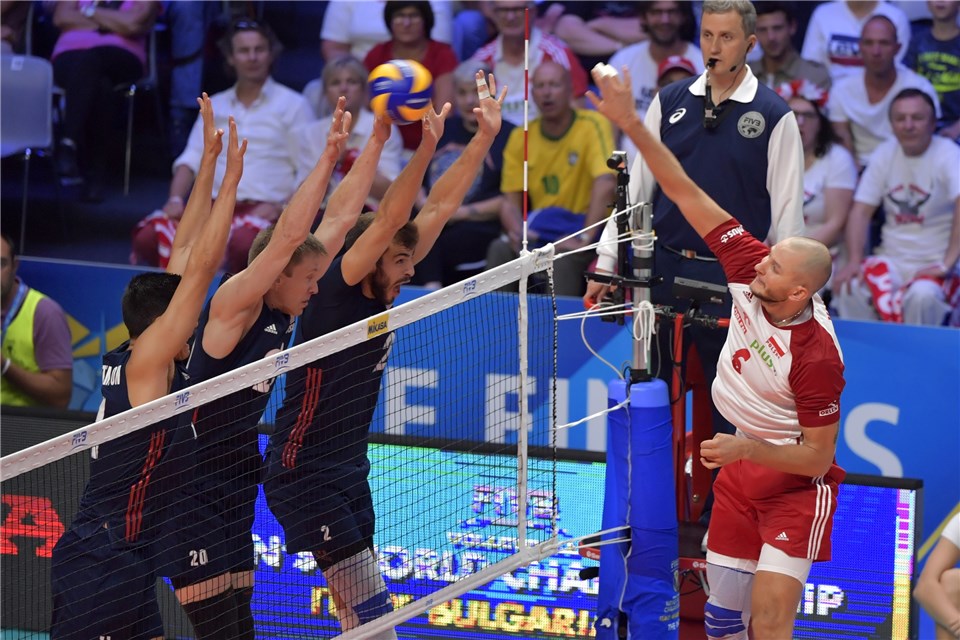 Bartosz Kurel gave a heroic performance against the United States to set up a finals rematch with Brazil. Current Photo via FIVB

Bartosz Kurek and Michal Kubiak accounted for 65% of the points earned by Poland. Kurek, an opposite, and Kubiak, an outside hitter, also took 68% of Poland‘s swings in attack. Though the majority of the attack went through those two players, both still hit over 50% (Kurek: 53%, Kubiak: 56%). They also found a tremendous amount of luck getting points by attack the right back position on the court.

In the end, Kurek was the outright star of the match. He finished with match-highs in points (29), kills (24) and blocks (5). Kubiak finished the match with 22 points on 18 kills, 1 block and 3 aces. Fabian Drzyzga also contributed 3 aces for Poland while setting them to a 52% hitting percentage.

Piotr Nowakowski was the leading scorer in the middle for Poland with 8 points. These points came from 4 kills and blocks. Mateusz Bienek and Jakub Kochanowski split time at the other middle blocker position with Kochanowski entering the match in the second set. Bienek scored 1 point on 1 kill, and Kochanowski finished the match with 5.

The United States put forth a more varied attack with Taylor Sander (19), Matt Anderson (19), and Aaron Russell (18) all producing double-digit points. Sander hit 15 kills with a 50% attack average. He also chipped in 2 blocks and 2 service aces. Anderson hit 49% while scoring on 17 kills. He also had a block and an ace. Russell put away 16 kills with a 43% hitting percentage. He, like Anderson, also contributed a block and a kill.

Dave Smith scored 12 points in the middle on 7 kills. 3 blocks, and 2 service aces. Max Holt and Dan McDonnell split time at the other middle blocker position. Holt started the match, played the first two sets, and also started the tie-break. He scored 8 points from 6 kills and 2 blocks. McDonnell scored 5 points on 3 kills and 2 aces.

Erik Shoji led the match with 13 digs. The libero also had a match-high 90% of his 22 service receptions rated as excellent. Micah Christenson scored 2 points in the match and set the United States to a 50% success rate in attack.