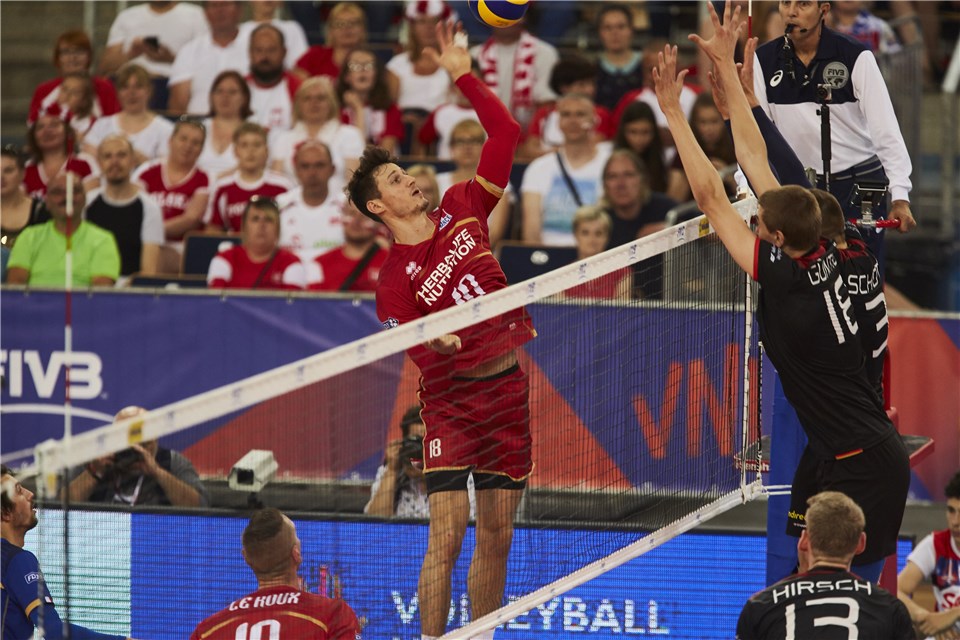 China had the top scorer in the match, but Poland owned nearly every other statistical category, rolling to an easy sweep and a 5-0 record atop the Volleyball Nations League standings. Thibault Rossard and Barthelemy Chinenyeze took their turn in the spotlight as the top scorers for France as the team swept past Germany in all phases of the game. Current Photo via FIVB

China had the top scorer in the match, but Poland owned nearly every other statistical category, rolling to an easy sweep and a 5-0 record atop the Volleyball Nations League standings.

Artur Szalpuk (16), Bartosz Kwolek (11), Dawid Konarski (10) and Jakub Kochanowski (9) provided a balanced scoring front for the Polish side. Szalpuk downed a team-best 14 kills and added two aces, while Kwolek chipped in eight kills and three perfect serves. Kochanowski racked up a team-leading five blocks and four kills, while Konarski tacked on three stuffs to go with six kills and an ace. Captain Michal Kubiak had the night off.

Chuan Jiang scored a match-high 18 points for China, with 16 kills, a block and an ace, but yet again found himself on an island on the scoring front. Jingyin Zhang was next on the team with just five points, all on kills. Shuhan Rao chipped in four points, all on kills.

Szalpuk made the most of his day in the starting lineup, tallying 10 points in the opening stanza as Poland took a 7-5 lead and ratcheted it up to six at 16-10. The Poles had six set-point tries if needed, but only needed two, with Szalpuk planting the second to seal at 25-19 win.

China turned the tables with a 5-1 lead to start Set 2. After a timeout, Poland returned to form, working its way to a 10-9 advantage. The Poles upped their lead to seven at 20-13 and maintained the gap en route to a 25-18 win.

The teams were close in the opening stages of Set 3, but by the midway point, Poland boasted a 12-10 advantage. In the end, miscues spelled the end of the night for China in a 25-21 loss.

Poland coach Vital Heynen: “We had a good first set, then we started the second set bad. We managed to turn the odds in our favour, which was very good. My players feel they are very good and they are sometimes a bit too relaxed.

“After the match I told my players that tomorrow is a special match for me against Germany, so we need the sixth win. We are not playing to lose, we are playing to win.”

China coach Raul Lozano: “The fact that coach Heynen makes so many changes is not a big problem for us because we need to play our game no matter who stands on the opposite side of the net. There are things that we need to do better, which today we didn’t. These things do not depend on what happens on the opponents’ side.

“We all make changes because we have to test new solutions and give some rest to those who are tired. We still have a lot of work to do especially on the technical side. There is a reason why China are outside of the top 20 in the world ranking. I am lucky in a way that once the Chinese play against a team more than once, they will know how to react and they will understand the opponents’ style. We still lack a lot of games against top teams. It would surely help my players if they played more abroad.”

Thibault Rossard and Barthelemy Chinenyeze took their turn in the spotlight as the top scorers for France as the team swept past Germany in all phases of the game to bounce back from Friday’s loss to Poland.

Rossard notched a match-high 10 points, while Chinenyeze added nine. Five players turned in five or more kills, led by Rossard’s eight. Chinenyeze and Stephen Boyer added seven apiece, followed by Kevin LeRoux (6) and Jean Patry (5). Chinenyeze also put up two blocks, while Rossard and Patry each served up an ace. Patry scored his six points all in the third set for the French in relief of Boyer.

Simon Hirsch was the top scorer for Germany, turning in nine points with eight kills and an ace. Linus Weber added eight points on five kills, a team-best two blocks and an ace, despite playing in just two sets. Ruben Schott (7) and David Sossenheimer (6) followed. A huge missing piece for Germany was on the bench as top scorer Christian Fromm sat out.

The French grabbed a 10-5 lead in Set 1 as Rossard served up an ace and Boyer hipped in a kill. The margin stood at seven (16-9) at the second technical timeout. Germany rallied and thwarted two set point tries by France, but Julian Lyneel capped the 25-21 victory.

After a 13-all tie in Set 2 it was nearly all France as the team scored eight straight to pull away and held on for the 25-18 win on a Boyer putaway.

Weber helped Germany stay within striking distance in Set 3 and his side narrowed the gap to just two points late, but the team could not get out of its own way with service errors. LeRoux sealed the match with the final kill at 25-23.