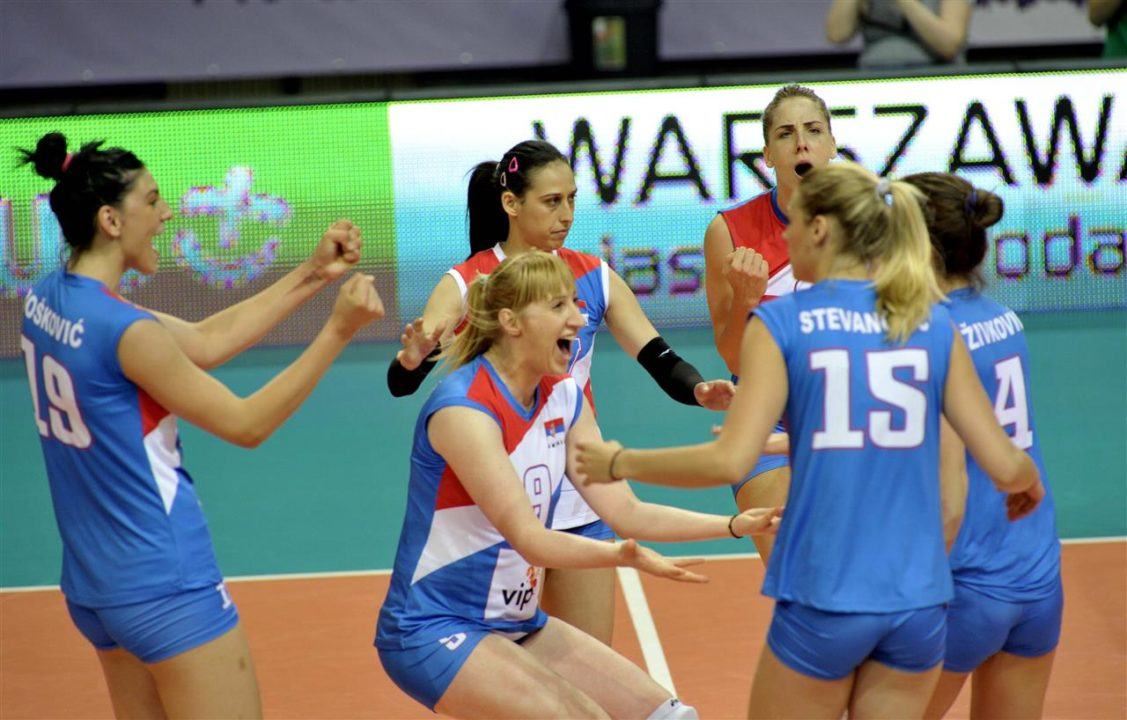 Only Pool B was in action on the women’s side of European Qualification for FIVB World Championships on Wednesday. The rest of the women’s pools continue play on May 30 or 31. No. 2 Serbia, No. 15 Slovakia and No. 9 Poland all won in sweeps on Day 2 of play in Warsaw, Poland. Poland and Serbia are now 2-0 on the tournament. Pool B play continues Thursday, Saturday and Sunday.

Serbia led Set 1 and 2 from start to finish, dominating the second set late, winning 25-19 and 25-18. The Czech Republic surged ahead 12-5 early in Set 3, but Serbia fought back to tie it up and take the lead at 16-15, before holding on for the win. The Czechs gave up seven points on errors in the final stanza.

Serbia put up 14 blocks, while allowing just four, and hit at a 47 percent clip, while holding the Czech Republic to a 37 percent effort.

“Maintaining our concentration throughout the game is something that we will try to improve for the next games,” Boskovic said. “We are happy with this 3-0 win. Every match and point counts here. The Czech Republic played really well, especially in defense and I think they are one of the best teams in this tournament.”

Slovakia dominated Cyprus across the stats sheet, outblocking them 5-2, outserving them 8-2 and outhitting them 63 percent to 26 percent in a sweep Wednesday afternoon. Slovakia won the match 25-15, 25-13, 25-10.

After a fairly even start, Slovakia took control of Set 1, leading by as many as 11 at 16-5 en route to a 25-15 win. Cyprus boasted an 8-7 lead at the first timeout of Set 2, but Slovakia quickly turned things around with a 9-1 run and cruised to the 25-13 victory. The 15th rank Slovakian side carried the momentum into Set 3, scoring eight of the first 10 points and never looking back, crushing Cyprus 25-10 in the final set. Slovakia managed 15 kills in the final set, while hitting at a 68 percent efficiency and holding its foes to just four kills in the stanza.

“These three points are important, but the big thing for me is that this was the first official game, and not an easy one from the mental side, for some of our very young, new players – the libero and the opposite,” Slovakia coach Marek Rojko said. “Letting them play in a real, national team game is important for our future.”

“This tournament and match is a great experience for my team,” Cyprus coach Petros Patsias said. “Our aim is to win gold in the Small Countries Division, so playing here is very good for my players.”

Set 1 was close through the second timeout as the home team led just 8-7 and 16-13. The Polish squad finished out the stanza on a 9-3 run. Set 2 was never in question as Poland went up 8-1 early and continued to dominate throughout, allowing Iceland just one kill, while turning in 13 of their own to go with two blocks. Iceland took an 8-3 lead out of the break, but Poland rallied with a 13-6 run to turn the tables and go up 16-14 en route to closing out the 25-18 win and the match.

“Our performance in the second set was really good, and regardless of how the opponents played, we made a minimal number of own mistakes and that was enough,” Polish coach Jacek Nawrocki said. “In the other two sets my players looked tense again – wanting too much too fast and this is not good for the flow of the game.”

“For us, for the second line-up, it was an important game – to go out there and take the responsibility for the match, especially when everyone expects a perfect result,” Tokarska said.

Pool B in POL