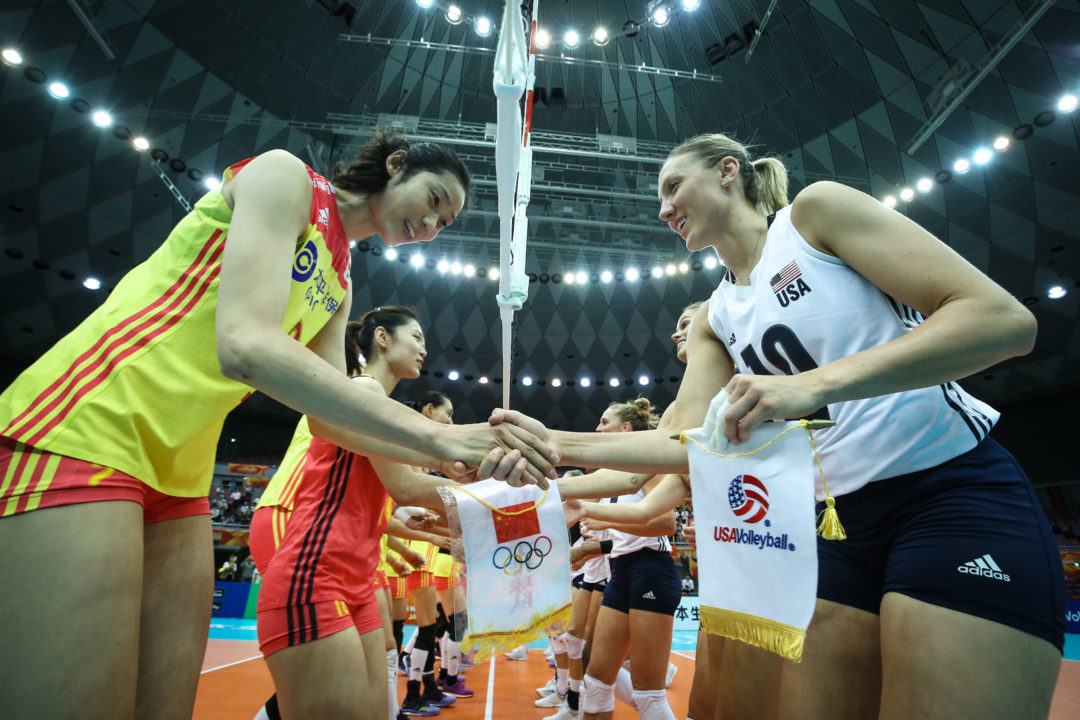 The Americans and the Chinese will meet for the 4th time this summer. The Chinese have won 2 of those matches. Archive Photo via FIVB

Pool draws for the Final 6 round of the 2018 FIVB Women’s Volleyball World Championships have been finalized. Via a live-streamed drawing on Thursday night in Japan, which went much more smoothly than did the men’s, teams were broken into 2 pools of 3 teams each.

The schedule was set later in the evening with the influence of television producers. Namely, the hosts Japan got prime-time spots for both of their matches, and on the day that they weren’t playing, neighboring China was put into the spotlight time slot.

Analysis: the host nation Japan got a tough draw here. Italy hasn’t been beaten at these World Championships, and Serbia hadn’t lost a match until their spot in the Final 6 was clinched. There are no easy draws at this stage of the tournament, but those two teams seem to be playing at a level slightly-above the rest at this point of the tournament.Italy are the wildcards here. They are loaded with weapons, and when they’re on fire, they’re on fire. But, we haven’t seen this group put it together for a whole tournament yet. They’re incredibly young, though, so every tournament has the potential to be the one where they put it together. With a Serbian injury to Tijana Boskovic, though, this pool gets very, very interesting.

Analysis: The Chinese and the USA have played thrice this year. At the Nations League, the Americans won 3-0 in pool play and 3-1 in the semi-finals. When they played last week in the 2nd round of the World Championships, however, China was dominant, taking a 3-0 sweep, hitting over 50%, and using a 9-3 blocks advantage to hold the Americans to just 39% offense. The Dutch have struggled, but put it together at the end of the tournament with a 3-0 sweep against Serbia (who admittedly had naught to play for). The Dutch have shown a lot of depth at a lot of position, and head coach Jamie Morrison has been willing to use that depth.

Watch the Draw Below: