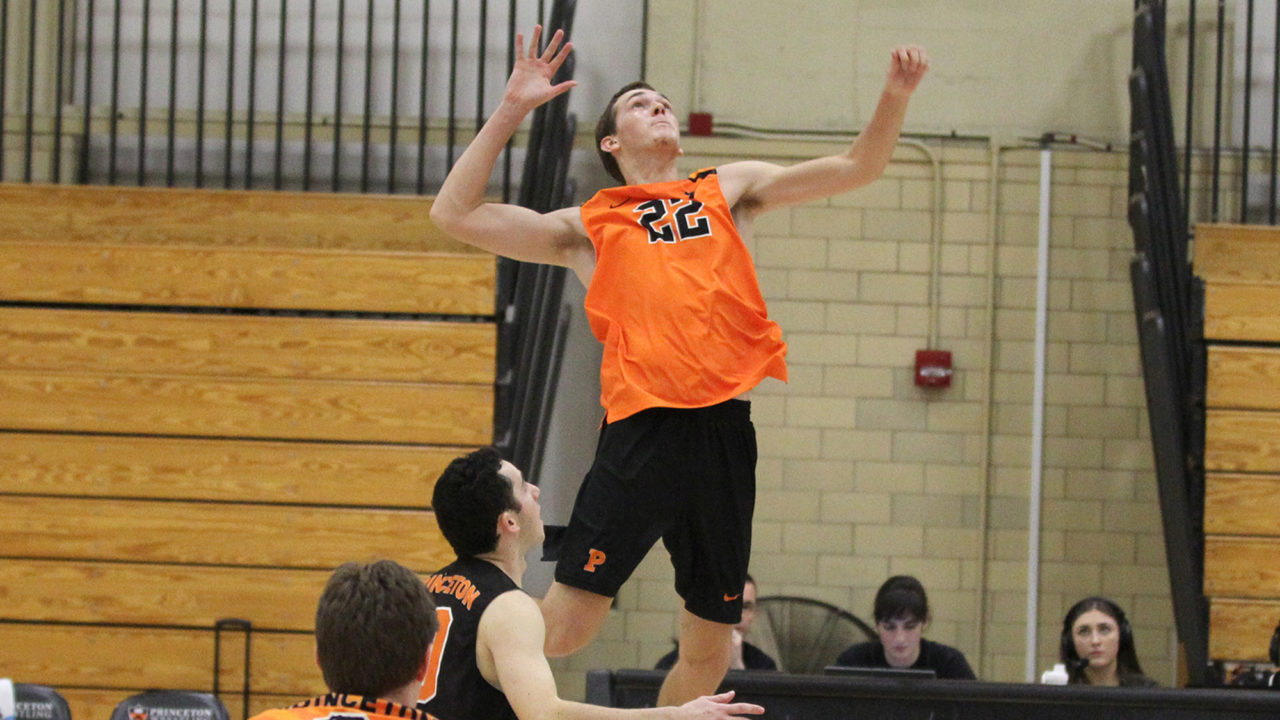 Princeton outlasted No. 18 McKendree in five sets on the road, but the remainder of the evening’s victors claimed home... Current Photo via Princeton Athletics

Princeton outlasted No. 18 McKendree in five sets on the road, but the remainder of the evening’s victors claimed home court advantage. No. 5 Loyola, No. 9 Lewis, Sacred Heart and Belmont Abbey posted home wins on Thursday.

Sophomore outside Matt Szews put down a match-high 12 kills, but it was not enough for the Cardinals. Sophomore outside Blake Reardon and senior middle Matt Walsh followed with seven apiece. Walsh hit at a team-high .417 clip, while Szews accounted for two of the team’s four aces. Four players turned in a block assist for BSU.

It Was Over When: Ball State rallied from down five at 13-8 to grab a two-point lead of its own at 17-15 with a 9-2 run with help from four Rambler miscues. Four different Cardinals notched kills in the stretch. Loyola countered with a 4-0 run, including back-to-back BSU errors and an ace by Jendryk. The teams were tied at 20, 21 and 22 before a pair of Szews putdowns gave Ball State a set-point try at 24-22. A Jamison kill, a hitting error and a solo stuff by Jendryk put Loyola back on top at 25-24. Facing a second match-point attempt at 26-25, Walsh and Szews came through to give Ball State another go at 27-26. Loyola closed out the night with a 3-0 run as two hitting errors set up a final Gevis kill at 29-27.

It Was Over When: After a tie at 8 in Set 3, Lewis pulled away with a 6-1 run, including two kills and a block by Murray and a Coenen ace. Trailing 14-9, Fort Wayne narrowed the gap to two at 16-14 and again at 18-16, thanks in part to five Flyer errors. It was nearly all Lewis from there as the Flyers wrapped up the match on a 7-2 run. Bugee and Coenen turned in two kills apiece to set up match point at 24-17. The teams traded service errors to end the night.

Key Stats: In the first of two matches at McKendree this week, Princeton held on for a five-set win on Thursday, extending its current win streak to seven matches, following five EIVA wins with a pair of non-conference affairs. The Tigers won the first two sets and rebounded to take Set 5. Princeton outhit the Bearcats .342 to .307 and boasted leads in aces (7-4) and blocks (11-7.5) in the win. McKendree downed four more kills (70-66).

Stat Leaders: Sophomore outside Parker Dixon (22), sophomore middle George Huhmann (19) and sophomore outside Greg Luck (17) accounted for all but eight of Princeton’s 66 kills. Dixon was on fire, hitting at a .500 clip (22-42-40) and rounding out a double-double with 16 digs. Huhmann turned in a match-high five blocks alongside senior outside Mike Fuerst. Senior middle Junior Oboh added six kills and served up five of the team’s six aces.

It Was Over When: After letting McKendree back in the match with wins in Set 3 and 4, Princeton raced out to a 6-3 advantage in Set 5 with two Huhmann kills and two Bearcat miscues. Kills by Wilcox and Ross had McKendree within one at 6-5, but the Tigers scored six of the next nine to surge ahead 12-8. Two Luck putaways and an ace by Oboh highlighted the rally. Two Dixon kills helped Princeton to a 14-10 lead. Wilcox kept McKendree alive momentarily, before a Huhmann putaway gave the Tigers the victory.

Key Stats: SHU ended a six-match losing skid by outdoing the Battlers in every statistical category. The Pioneers outhit Alderson Broaddus .210 to .109, thank in part to a .440 effort in Set 3 and .379 clip in Set 4. A 7-2 advantage in aces and 9.5-9 lead in blocks also aided the Sacred Heart effort.

Senior outside Francisco Cabrera and freshman outside Alex Sands led the Battlers with 14 and 10 kills respectively, while each adding one ace. Neither hit better than .100 in the match, however. Senior middle Myles Miller turned in seven kills at a team-high .538 clip, while also notching six blocks.

It Was Over When: Sacred Heart broke away with a 7-0 run in Set 4, taking a 13-6 lead, which it would not relinquish. Tischler managed two kills an a block in the run, which also included two AB miscues. The Battlers would get no closer than six the rest of the way, last at 14-8. The Pioneers upped the advantage to 10 at 20-10 with a kill and a block by Bloomquist and two Alderson Broaddus service errors. Down 22-12, the Battlers put together a 5-2 run, thwarting two match-point tries at 24-15, but a Waumans putaway prevented a further comeback.

Senior outside Jake Dube was the top hitter for Queens with eight kills on an error-free .727 hitting effort (8-0-11). Freshman outside Nic Cavallaro and freshman outside Tristan Santoyo chipped in six kills apiece, but each hit under .100 for the match. Cavallaro, Santoyo and freshman libero Conner Nayaki pulled up eight digs apiece. Santoyo served up all three of the team’s aces. Freshman middle Donovan Bethel added three kills and a team-high three blocks.

It Was Over When: Set 3 featured 11 ties, the last at 23 all, with neither boasting more than a two-point advantage. After trailing 14-12, Queens rallied with five of the next six points, including two Crusader miscues, two Dube putaways and a Santoyo ace, to go up 17-15. The teams traded points over the next 12 serves, leading to a 23-21 Royals advantage. Belmont Abbey closed out the sweep with four straight points, including a pair of hitting errors to set up match point, which came on a Maxwell putaway.