(We have edited this post after the FIVB released their updated draw procedure. In the past the FIVB had seeded the host plus 11 teams. For this tournament, it has now seeded the two hosts plus 6 teams. We think that this is draw is now more interesting to the fans.)

With the conclusion of the qualifying for the 2018 FIVB Men’s World Championship on November 11, 2017 after Puerto Rico and Cuba clinched their berths, Volleymob has decided to see how the pools will look for the first round of play. The official draw is November 30th and will be broadcast on the Italilan Volleyball Federation page at youtube.com live at 16:30 Italian time (15:30 UTC, 10:30 Eastern, 7:30 Pacific).

The FIVB uses the world rankings to allocate the positions for all of the teams in the tournament. The ranking from July 7th, 2017 will more than likely be the last rankings until the end of the Volleyball Nations League for Men next year.  The only way it would not be, would be if the Continental Confederation results were included in the world ranking. They have been used in the past, but it has not been used since July 2016.

The top 6 teams plus the two hosts Italy and Bulgaria, will have their pools already decided before the drawing of lots. The two hosts, in this case, will be placed in Pool A and D, row 1. Italy will host Pool A and C, and then two Second Round pools (we think Pool E & F, FIVB has not determined which ones yet). Bulgaria would then host Pool B and D, and the other two Second Round pools (we think Pool G & H).

Starting from Pool B, the FIVB will then use a serpentine system for the top 6 teams. Brazil as the number 1 team in the world will be placed in Pool B, row 1. USA as number 2 is then placed in Pool C, row 1. Bulgaria then follows in Pool D, row 1. Now the serpentine system will slot teams 3-6 from Pool D to Pool A. Starting with Poland in Pool D, row 2 and finishing with the Argentina in Pool A, row 2. 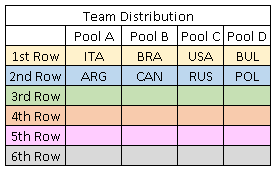 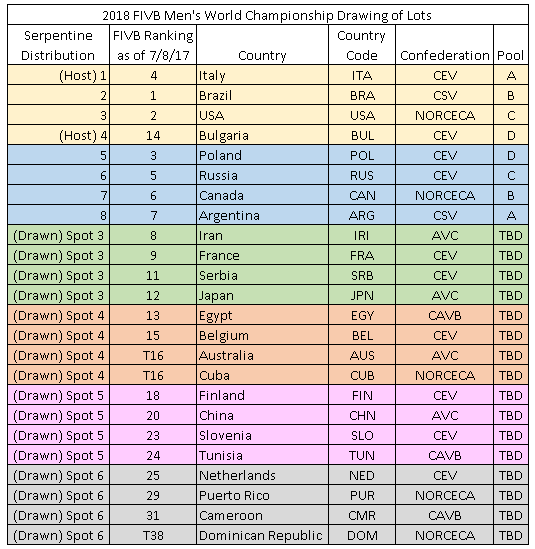 The FIVB has a regulation with the drawing of lots that no more three teams from one confederation can be in one pool. For example, Pool D has Bulgaria and Poland, both from the Confederation for European Volleyball (CEV). If France or Serbia was selected (row 3), then neither Belgium (row 4) for Pool D, nor Finland (row 5), nor Slovenia (row 5), nor the Netherlands (row 6) would be eligible for Pool D. In Pool A, it is similar because Italy will be in row 1, and France (row 3), Serbia (row 3), Belgium (row 4), Finland (row 5), Slovenia (row 5) and the Netherlands (row 6) have a chance to be in pool. If the France and Belgium were drawn, then a different region would be necessary for Pool A.

In Pool C, the Russia already being from CEV, is in the same predicament as Pool A and D.

Already Pool C looks crazy with USA and Russia together even before the rest of the pool is known. Pool B with Brazil and Canada also looks great from the start. While Bulgaria probably got to pick which pool it wanted and chose D. Now that there are drawn spots for the 3rd row, the pools could even have a group of death or even more entertaining geopolitical ramifications. If Iran gets into Pool C, with the USA and Russia, that looks like fun off and on the court. Or France facing Brazil and Canada in Pool B, to have a rematch of 2016 Olympics Pool Play. If Serbia goes to Pool D, it is an all eastern European battle at the top.