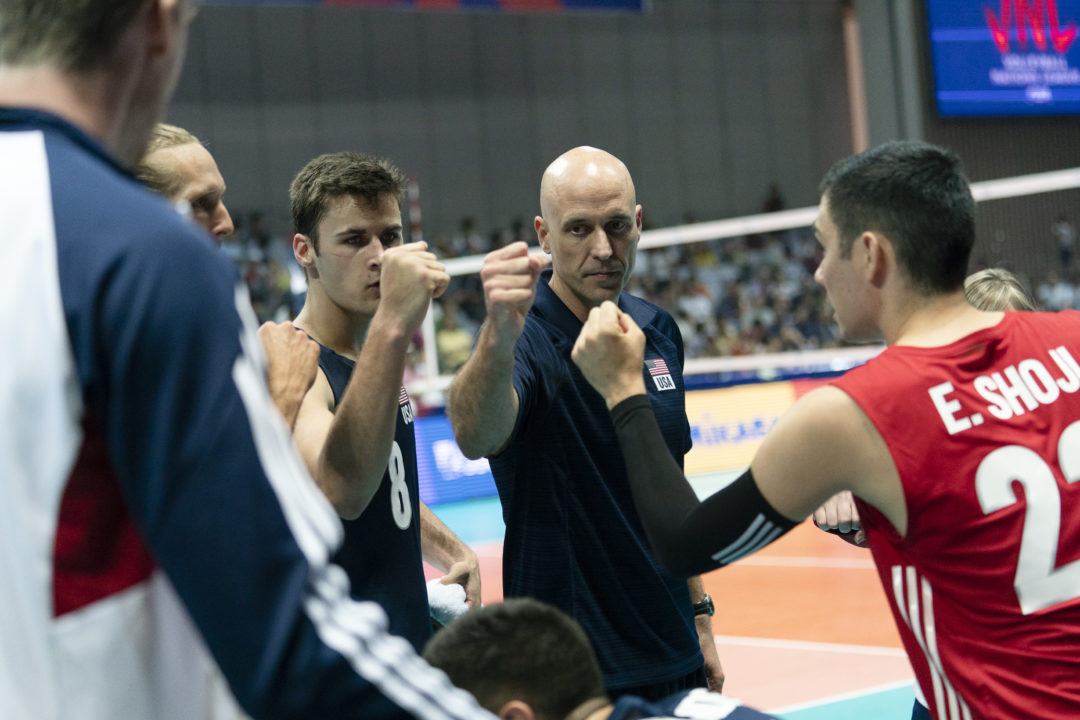 The United States staved off the Chinese attack throughout the match, including a set-point attempt in Set 2, en route to its third win of Volleyball Nations League play.  Current Photo via FIVB

The United States staved off the Chinese attack throughout the match, including a set-point attempt in Set 2, en route to its third win of Volleyball Nations League play.

The Americans bested China 10-3 on the block and 8-1 from the service line. Team USA also boasted a 43-35 lead in kills, but gave those points back to its opponents in the form of a 23 miscues (to just 15 for China).

Chuan Jiang was a one-man show for China, racking up 15 points on 14 kills and a block, but his support was minimal, with three players notching five kills apiece: Shuhan Rao, Jingyin Zhang and Haixiang Du. Rao put up a team-high two blocks, while Zhang served up the team’s lone ace.

The United States served up four aces and put up four blocks in the opening stanza.

Trailing 23-21 in Set 2, the United States found a way with a DeFalco block and Sander ace finishing off the 26-24 win. The Americans won going away after that, shutting down China in the final stanza.

Team USA will now head to Goiania, Brazil for Week 2 of VNL play.

USA captain David Smith: “We are satisfied with the results of this weekend. The win is very important and it showed our spirit. We have not seen them in a long time. Watching their video, they are an impressive team to face and they showed it on the court tonight. I think they have a bright future. I am very happy for our team, some of our guys have their Volleyball Nations League debut tonight and they did very well.”

USA player Taylor Sander: “I am very happy to win. It was a very fun match. I played in China last year and it was nice to come back here with Team USA. China are a good young team and it was fun playing here. Last year, we were 0-3. We had no wins after the first weekend, so this is actually great for us.

China coach Raul Lozano: “They limited us especially with their strong service. The first set was quite balanced, but we had a chance to win the second set. We were obviously limited in the last set.

“All of these are precious experience for China. We will find our gaps in this tournament then we will seek the right direction to move forward. The three matches delighted us a lot. We had some difficult moments but we should consider learning and improving at this point. We learned a lot from this and I believe the players played well in the previous two matches. We just weren’t able to continue that in our performance tonight.

“As the coach of China, my ultimate goal is the Olympic Games, but now we should have our own tactics and preliminary personnel structure. I have a lot of young players and I want to rotate them to test who can withstand the challenges in international matches. I hope we can narrow the gap but we still have a lot to learn.”