Setting Up the European Championship Semifinals 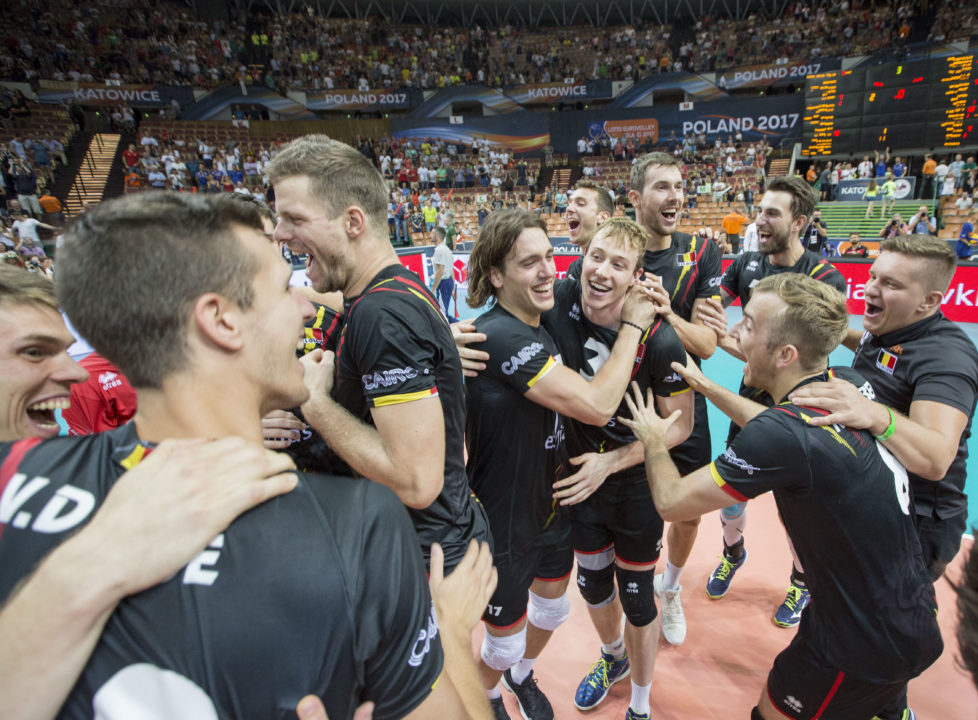 The Belgians made history, earning their first ever European Championship semifinal berth on Thursday. The team must now face fourth-ranked Russia to try to earn a podium spot. Germany and Serbia round out the semifinal field.  Current Photo via CEV

Belgium, Germany, Russia and Serbia went 3-0 en route to winning their respective pools and continued their winning ways in Thursday’s quarterfinals, but something has to give as the teams face off in the European Championship semifinals Saturday in Krakow.

None of the team’s made the podium at the 2015 edition of the championships, as France, Poland and Italy took the medals. Belgium was the closest, making the semifinals before falling to

The 11th-ranked Serbians are looking to get back on the podium for the first time since winning gold in 2011 and bronze in 2013. The team just missed the final four at this summer’s World League championships, finishing fifth.

“Everyone in Serbia already talk about the gold medal, but we have to concentrate only on Germany,” Serbian captain Dragan Stankovic said. “We have to try and overcome that part, then we can think of something else.”

Serbia is led by Uros Kovacevic and Nemanja Petric. Each have averaged 13 points per match and served up five aces. Serbia averages 2.2 blocks per set and has served up 21 aces, the most of the four teams remaining.

The 10th-ranked Germans, which  won the bronze medal at the 2014 World Championships in Poland, have struggled to find their footing since then, finishing eighth at the 2015 European Championships and 27th in this year’s World League play.

“We are coming off a very difficult semifinal against Czech Republic,” German captain Lukas Kampa said. “Until now #EuroVolleyM was a great tournament for us, as we won all of our matches. I don’t think many people expected Germany will reach this phase, expect for us of course. We want to play a great semifinal tomorrow and I hope this journey continues as well as it did so far and we will show some exciting volleyball.”

Gyorgy Grozer has carried the bulk of the load for Germany, tallying 70 points (17.5 per match), while his nearest teammates, Denys Kaliberda and Christian Fromm have chipped in 36 and 35 respectively. Grozer also has served up a team-best seven aces. As a team, the Germans have managed 2.9 blocks per set and hit at a 34 percent efficiency.

The fourth-ranked Russians have yet to drop a set in four matches at the championships, sweeping Bulgaria, Slovenia and Spain in pool play and downing Slovenia again in the quarterfinals. The team, which finished fifth in World League play in July,  is not underestimating its next foe, however.

“We know Belgium is a good team,” Russian coach Sergey Shlyapnikov said. “It would not be fair to go into details, as we have only followed their last match, a quarterfinal against Italy. We will be analysing it tonight.”

Russia is led by opposite Maxim Mikhailov and outside hitter Dmitrii Volkov. Mikhailov has averaged 14.5 points per match, posting nearly 12 kills per match and hitting at a 45 percent efficiency. Volkov has chipped in 12 points per match, including nine kills per contest. Russia has averaged 3.6 blocks per set throughout the tournament, the second best average by any team, while also managing a 45 percent attack efficiency, tops in the tournament.

No. 15 Belgium is making its European Championship semifinal debut, but the team has been building over the past few years, making their first World League appearance since 1990 in 2014 and moving up the ladder the last four years, finishing seventh in group stage action in 2017.

“We believe in ourselves and we don’t see any team as a favourite we can’t oppose,” Belgian captain Sam Deroo said. “Throughout this tournament we believed in our chances to win. If the respect for your rival goes too far, it stays in your head in the key moments. That is not the issue at this #EuroVolleyM. It is important to remain patient and push the opponent to make a mistake. The key will be to distract Russia’s rhythm. No team has made them doubt themselves yet.”

Opposite Bram Van Den Dries and Deroo are the top scorers for the Belgians. Middle blockers Simon Van De Voorde and Pieter Verhees also will likely be a factor. Van Den Dries has scored 16 points per match and served up 12 aces, while Deroo has managed 17 points per match. Van De Voorde and Verhees have added 14 and 12 blocks respectively in 15 sets, while managing nearly eight points per night. Belgium has managed a tournament-leading 3.8 blocks per set over the last four matches.