Serbia Downs Poland in Front of Record Crowd of 65,000-Plus 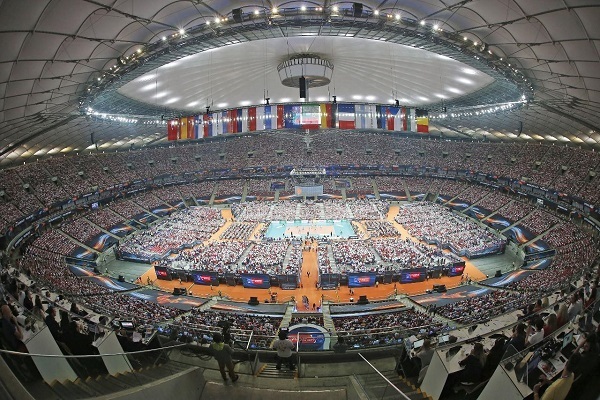 Finland held on for the five-set win over Estonia to open Pool A play, while Serbia made short work of Poland. A pair of sweeps highlighted Day 1 action in Pool C with wins by Russia and Slovenia. Current Photo via CEV

Finland held on for the five-set win over Estonia to open Pool A play, while Serbia made short work of Poland. A pair of sweeps highlighted Day 1 action in Pool C with wins by Russia and Slovenia.

The Finnish led Set 1 throughout as Estonia committed 10 errors and came back from down 16-13 in Set 2 for a 25-22 win, including 16 kills and three blocks. The Estonians rallied from down 21-19 to take a 27-25 Set 3 victory, then followed with a wire-to-wire Set 4 win, each including 10 Finnish miscues. Finland cruised to the 15-9 tie-breaker win with help from eight kills and four Estonian errors.

“We never thought the game was won, it was point-by-point,” Finland coach Tuomas Sammelvuo said. “We always spoke about focussing on every moment. We gave Estonia the momentum and their defense was amazing at the end of the fourth set. We came back towards the end of the fourth set and it was crucial for us to play the fifth like we played. I’m proud of my players because no matter what happens they never give up. It has to be like this for Finland. We have to play as a team. The fans will be big for us against Serbia and Poland. Some of these players have never been to a tournament like this and I hope we remember these moments.”

Estonia outdid the Finnish in terms of hitting efficiency, 48 percent to 43, but that was not enough to best Finland’s 9-2 ace lead and 62-60 edge in kills. Both teams managed eight blocks.

Olli-Pekka Ojansivu racked up 24 points to lead Finland, downing 20 kills and adding a team-best three aces and a block. Markus Kaurto and Niklas Seppanen followed with 15 and 11 points respectively. Kaurto put up five blocks and added eight kills, while Seppanen chipped in 10 kills and an ace.

Robert Taht put down a match-high 23 kills and added a block for a 24-point tally on the Estonian side. Ardo Kreek was the lone other Estonian in double digits with 13 points, including 11 kills and two blocks.

Serbia disappointed the record breaking home crowd of 65,407, by issuing Poland a 3-0 loss on opening day of the European Championships.

Poland led at the first timeout of Sets 1 and 2, but Serbia had seized control by the second break en route to victories. The Serbians led throughout in the final 25-20 win, holding off the home side which battled to tie the score at 18.

“This is a huge victory for us,” Serbian captain Dragan Stankovic said. “However, it is just the first match of the tournament and we need to look ahead and remain focussed on the next ones. We played good volleyball, but we can play even better and I hope that we will raise our level of play throughout this championship. It was hard to play in front of 65,000 fans, who were all cheering for the opposition. Poland started very well, but I think that a crucial moment came in the middle of the first set, where we were down by three points; we did stick together as a team and we managed to change the course of the game. A 3-0 victory is a very good result but we will try to forget it for a moment and focus on the next opponent.”

Michal Kubiak (11) and Dawid Konarski (10) led the way for Poland. Kubiak registered nine kills, while Konarski added eight. Each accounted for a pair of blocks.

“I would like to thank all the people who have organised this event and all the fans, who made sure that we will never forget this day,” Kubiak said. “The reality is that we lost this game and Serbia deserve our congratulations, because they simply played better. However, this loss does not affect our chances for the rest of this tournament, even if it did not start the way we wished it to be. We all hope that in Gdansk we will achieve better results.”

Russia held off a late Bulgarian rally in Set 1, but made little doubt in the final two stanzas of the sweep. Errors piled up for the Bulgarians, especially in the third set, where the team gave away nine points on miscues.

The Russians bested Bulgaria in every major statistical category: kills (41-40), blocks (9-7) and aces (4-2). Bulgaria committed 21 errors, while Russia limited its miscues to 13.

“In every aspect of the game my players were better than the Bulgarians,” Russian coach Sergey Shlyapnikov said. “We made less mistakes. But we must remember that it’s our opening match of the European Championships. I’m glad of the victory and think that it’s an important first step. My team now will play a difficult match against Slovenia, a surprising silver medallist two years ago. We don’t know what the Spaniards are capable of.”

Rozalin Penchev scored a match-high 17 points, including 14 kills and three blocks, but it was not enough to lift the Bulgarians to victory. Tsvetan Sokolov followed with 12 points, all on kills.

Slovenia, the defending Euro silver medalists,  trailed for the majority of Set 1, before overcoming a 21-19 deficit for the 27-25 victory. Twenty-one of the team’s points came via kill. The final two sets were nearly all Slovenia with scores of 21-13 and 21-14 late.

Toncek Stern accounted for a match-high 17 points, with a match-best 16 kills and a block. Tine Urnaut (16) and Alen Sket (15) were close behind. Urnaut downed 15 kills, while Sket tallied 10 kills, three blocks and a team-best two aces. Jan Kozamernik led the way at the net with five of the team’s blocks.

“We knew it was going to be hard because Spain played very well in the previous championship tournaments,” Slovenian middle blocker Alen Pajenk said. “We prepared thoroughly for this game. However, the first set was a little bit hard for us because they fought for every ball. In the second and third sets we just pushed with our serve and block and it was enough to win.”

Andres Villena was the lone Spanish player with double-digit points (14), including 13 kills and a block. Sergio Noda Blanco and Alejandro Vigil tacked on six points apiece, all on kills.