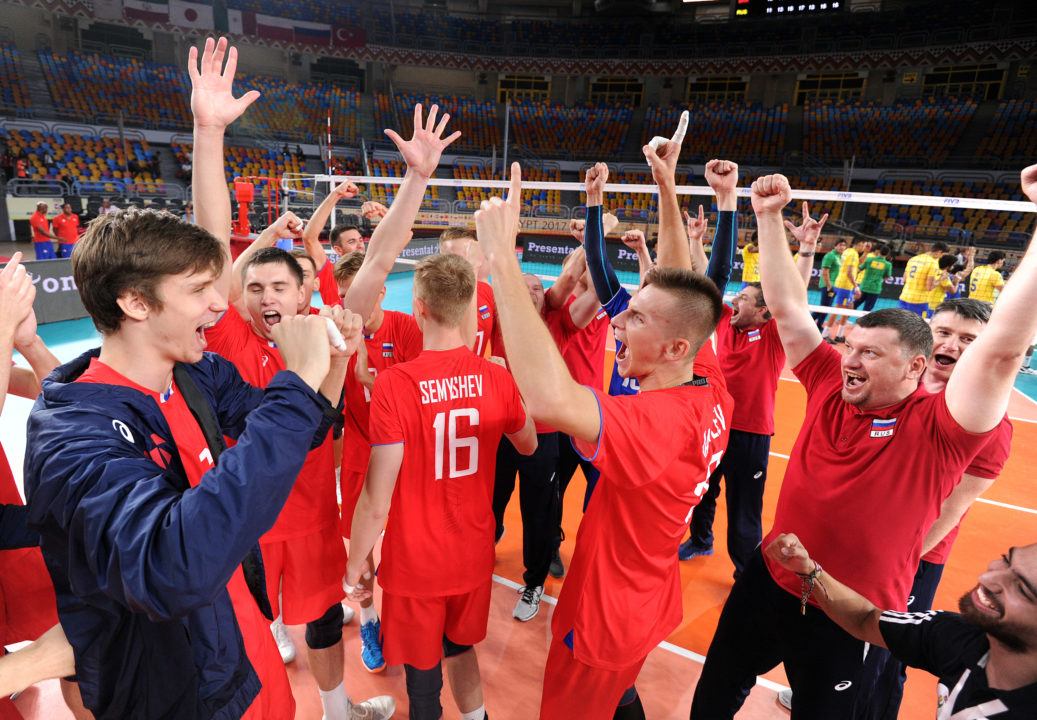 Russia knoced out Brazil in a thriller while Argentina strolled through Cuba in the path to the finals. Current

After a very poor start, full of unforced errors and shaky receiving that saw Russia trail by two sets, coach Andrey Voronkov gradually totally changed his original lineup, including bringing on Roman Zhos as setter to replace captain Pavel Pankov. And then the fun started. Brazil had two chances to go 3-1 up when they led 14-13 and 15-14 in the fourth. But a huge block by Denis Bogdan on Gabriel Candido followed by an ace from Kirill Klets turned it around as Russia leveled the score at two sets all. An amazing running dig by libero Rogerio Filho to bring the ball in play at 14-13 and a subsequent net touch by Denis Chereiskii on the block got Brazil back in the lead at 3-2 sets and within a set of making the final.

But by now Russia had found rhythm and had gotten used to the vast hall (where they were playing for the first time compared to Brazil’s sixth). The Europeans broke away 14-12 in the sixth and finished it with a spike from the outside by Fedor Voronkov off the Brazilian block and out of bounds. And after Brazil took a quick 3-5 lead in the seventh, the game turned into a one-team show. Ivan Iakovlev stepped up to the serving line and Russia made an incredible run of eight straight points to go 5-11 and practically bring the game home there and then.

Russia dominated the blocking with a tournament high of 16, to Brazil’s 10. Denis Chereiskii who came on in the second set was the winners’ best scorer on 17 points, including another tournament high of 8 blocks. Douglas Souza was the  top scorer of the game with 19 points for Brazil.

It is Russia’s second time in the finals of the competition after they beat Turkey 3-2 in 2015 in Dubai.

Russia coach, Andrey Voronkov: “It was a big win and we prepared our team for a match like this. These matches are hard to finish in four or five sets and I predicted that it would be long and tough. We won today thanks to our preparation to deal with the difficult moments in the game. Brazil are a very good team with a strong attack but we stopped them with strong blocking, especially after the first and second sets when we dominated the match. I don’t think of tomorrow yet -most important is that today the players get some rest and prepare for the final.”

Brazil coach, Giovane Gavio: “We started the game very well, but then all things changed. We had some difficulties to stop the Russian attack and at the same time we had problems to attack against their block. We had studied the Russian team and their six starting players previously in the tournament but the coach changed them and the substitutes today were very good. We also played well, but at some moments we lost concentration.”

Argentina outclassed Cuba 4-1 (15-7 15-7, 11-15, 15-13, 17-15) in the second semifinal of the day to set up a final against Russia on Friday and cement its status as volleyball’s hottest up and coming team. Soon, these finalists will be playing for the senior national team, and will be sure to elevate Argentina up as true South American rivals to volleyball powerhouse Brazil.

Cuba had a chance to stay alive for a sixth set, but they blew two set points (including a counter attack at 14-15) before Argentina came from behind to sideout and then get the win on a blockout by Jan Martinez from the left followed by a spike on the antenna by Miguel Gutierrez, otherwise the game’s top scorer at 20 points. Brian Melgarejo and German Johansen with 17 points each were Argentina’s best scorers as the South Americans pressured the Caribbean side with their serving.

It is Argentina’s first appearance in a final of this competition, after finishing 7th in 2013 and 6th in 2015. For Cuba it is the second time they miss out on a final after losing to Turkey in the semifinals and eventually ranking fourth in 2015.

Argentina coach, Camilo Soto: “We won – what more can we say. It is the second time for us to beat Cuba and I am very happy with what we did and so are my players. It was a very difficult match as it was won point by point with the lead shifting from one side to the other. This is what professional volleyball is. We played like a team and that is what made the difference.”

Argentina captain, Gaston Fernandez: “I am very happy because we played very well and we won and that was our target. It was a difficult match but an interesting one.”

Cuba coach, Nicolas Ernesto: “It was a good match and I congratulate Argentina for their good performance. We did not play well and we had some weak points that the Argentinians took advantage of. We will meet Brazil which is a very strong team and I think they will do their best to snatch the bronze medal.”

Cuba captain, Adrian Goide: “Argentina played very hard and they deserved to reach the final. We did not play well so we lost.”

Japan emerged as 4-3 victors (16-14, 10-15, 13-15, 15-11, 12-15, 15-13, 15-7) against Iran. The victory qualified Japan to play for the fifth position against the winner of the other play off 5 to 8 between Egypt and China, while Iran battle it out against the losers. Kenta Takanashi emerged as the match star scoring 16 vital points during the thrilling encounter, while Rahman Zadeh contributed also 16 points for the losers. The match showed a lot of exciting moments throughout the whole sets until Japan, being more physically fit, dominated the tiebreaker to win narrowly 4-3.

Japan Coach Fumitoshi Tokuanaga: “We are happy because we took revenge and were able to beat Iran today after they beat us in the Asia qualifications. It is an honor for us to beat the Asian title holders. The players applied my plan and that is why we were able to win. I think Egypt will win and we will meet it and try to make up for our group A loss in front to Egypt.”

Japan Captain Masaki Oyu: “We played well and we deserved to win. I hope we will end up being victorious in the team’s match tomorrow to clinch the 5th position which is up to our targets.”

Iran Coach Juan Cichello: “I congratulate Japan as their serve was the cause of their winning. The players felt they are stronger than they really are. They felt after the first two sets that they will win so they felt over self-confident so that is why we lost because they played better. We will try to look better in tomorrow’s match than today.”

Iran Captain Rahman Zadeh: “I have nothing to say. We did not play well so we lost.”

Egypt eased past China 4-1 (15-12, 15-13, 12-15, 19-17, 15-8). As usual, opposite spiker Hisham Ewais came out as match scorer with impressive 20 points followed by Abdelrahman Seoudy1s 14. China’s middle blocker Lijia Xiao contributed 14 points in the losing effort. Egypt conquered easily the Chinese defense to win the first set 15-12 after good attacking combinations ending in sharp hits by Ewais and Seoudy. The turning point in the second set was substitutions made by the Egyptian coach when he replaced the setter Ahmed Saber by Ahmed Elasry, where Egypt succeeded to come back from three points behind to win the set 15-13 and advance to 2-0.

As of this postage, the FIVB still hasn’t published the post match reactions.